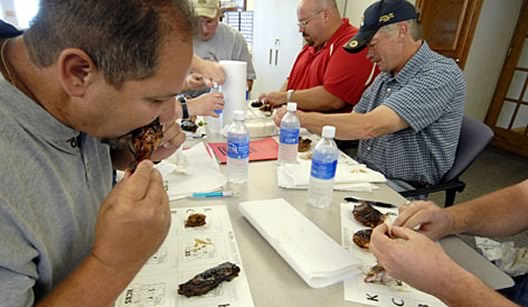 Anyone who loves the smoky arts will easily predict most of my Barbecue Frauds and Fallacies. They see them every summer themselves. Shoddy smoking appliances and their evil twins, overpriced gas grills. Liquid Smoke. Flat brisket. The list is a familiar one, but today I'm concentrating all my Eater firepower on a subject close to the hearts of all dedicated amateur barbecuers: Competition.

Now, don't get me wrong. It's fun. We're doing a big Kansas City Barbeque Society-inspired contest at Meatopia, the beer-and-meat extravaganza I'm co-organizing for Governor's Island on July 11th (Buy tickets now!). But the contest is for entertainment purposes only. As anyone who has ever competed in a barbecue competition knows, the actual events are ludicrous, laughable absurdities when it comes to actually handing out the awards. The judges consist of dozens of random people, who may or may not know anything about barbecue, and whose only qualification consists of being local "celebrities," or, worse still, vulgarians who have just completed a three-hour "certification" seminar in which they were taught the difference between chicken and pork.

At least in the Kansas City Barbeque Society, there are a class of "master judges" who have actually been to great barbecues and so have a working standard of excellence; but even that august body has no consensus on what to look for. One may like his brisket fattier, another leaner; one may look for a toothsome tug in a rib, while another enjoys the decadent sensation of feeling it slip off the bone with only a virginal shudder of pleasure.

In any case, master judges are as rare as coelacanths, and the bigger the contest is, the more bloated bodies and deadened, fatigued palates are needed to keep up with the rush of ribs, brisket, chicken, and pulled pork. Meats, it should be remembered, that was so lovingly prepared and plated all night, only so it could rot in unventilated, uninsulated white containers. The judges all write down random numbers and choose a random winner, and the contestants seethe over the injustice. And they're right to seethe.

I've competed in these things, and I've judged them, and I can tell you that they are utterly bogus in terms of their ability to honor and discern the best barbecue as a meeting of the Vegan Motherhood League would be. Yes, the top teams tend to place as often as not, but that's more a testament to their consistency than to the judges not being a mindless mosh pit of prejudice and low standards. If they wanted to have a real contest, there wouldn't even be sauce involved!

That said, if you can ever get to a contest, do so. The best barbecue in America isn't served at any restaurant: it's the stuff that's slaved over like an amuse bouche at The French Laundry, rather than turned out by the half-ton and kept in warming boxes. Barbecue contests are futile for the contestants, ignominious for the judges, but for all that, a noble effort all the way around. They're the heart of barbecue today, which is why it's such a shame that they are run with all the intelligence of a strip club applause meter.