Meat Is for Pussies Is... For Pussies

Share All sharing options for: Meat Is for Pussies Is... For Pussies 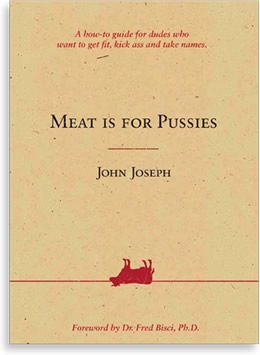 The anti-meat forces, having failed in all their previous attempts to persuade Americans to live on lettuce, have now turned to cross-dressing. Yes, the most epicene of all culinary movements has now been reduced to the expedient of butching up their propaganda with Meat is For Pussies, a two-fisted manifesto in favor of an animal-free diet.

It's not a novel approach; sitcoms of my childhood commonly featured gay steelworkers, test pilots, and big-game hunters in an attempt to use machismo against itself, and so find a place for traditional transgressions through the back door, so to speak.

Meat is for Pussies seems to be using the same tack, which is a good idea, since the picture most meat-eaters have of a vegetarian is Moby, a spokesman for the meat-free lifestyle that just happens to be a lifeless bald dweeb. You can't very well have Moby as your symbol for meat-free virility! There are no shortage of naturally cool carnivores (exhibit number one is right here). So in comes the suspiciously manly-sounding John Joseph, who gives us the hard sell — vegetables by way of infomercial self-actualization. Quoth the publisher:

John Joseph makes sure you never look at meat the same way. After painting a sickening picture of how things really are, John outlines a plan for a happier, healthier, and more fulfilling life. Do you want to continue living like a pussy, or are you ready to take back control of your life? It's your call.

You can almost hear the wheels turning inside Moby's head. Because, you can have no doubt, "John Joseph" is surely a pseudonym of Moby. Having failed to move us with Miss Pammy's ass, Sue Coe's comix, and an atrocity reel that could fill YouTube, PETA has had fallen back on the last refuge of a scoundrel: brocabulary. It's a sad day for cabbages everywhere.