The Evils of the Cookshack "Smoker"

Share All sharing options for: The Evils of the Cookshack "Smoker" 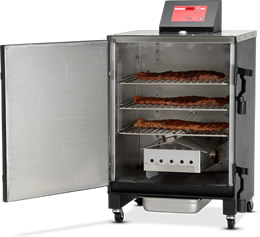 Summer is upon us again, covering gluttons with a layer of caul fat, imprisoning them in their refrigerated cells, and filling the streets with half-clad women meant for better men. It's also barbecue season, which can be almost as depressing for an eater of spirit. Barbecue, despite the enormous achievements of the last few years, is still an art done badly nearly always everywhere. Since most of the food media will be filled in coming weeks with credulous puff pieces about "great grilling" and "BBQ secrets of the masters," I thought you ought to know just how much misinformation is being imposed on you. Thus, over the next seven days on Eater, I'm going to present Barbecue Frauds and Fallacies. It's 2010. Informed eaters have a right to know why their barbecue sucks.

I should say "smoker," since this hydrant-sized parody, the barbecue equivalent of the Easy Bake Oven, provides only a childish burlesque of smoking. Basically, the Cookshack is an electric oven you can put some wood chips in. It's a sham, a shortcut for restaurants without the space, skill, or resources to put in a real smoker. And bear in mind that when I say a "real" smoker, I'm already talking about a compromised process: the Southern Pride, Old Hickory, and J&R units that represent the elite of commercial smokers keep the heat up with periodic bursts of gas, thus ensuring that your ribs will always smell vaguely of suicide. (Cookshack does have an all-wood line, but it's not generally used in restaurants.) The electric Cookshacks don't even pretend to require any skill of its operator.

Here's what it says on its own website: "Cookshack smokers' even and controllable heat makes a product that is smoky, moist, and tender — just what the judges are looking for — without the hassle and uncertain results obtained by traditional 'stick burner' pits." So that downtown faux-country hipster bar that just added barbecue to its menu? There's a reason it tastes no smokier than your bubbe's brisket.