What Really Got Me Banned from Momofuku

Share All sharing options for: What Really Got Me Banned from Momofuku 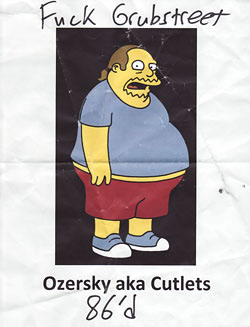 Like everybody else, I read Tony Bourdain's new book Medium Raw with haste and pleasure, and finished it in about three hours. At least an hour of that, though, was spent in fruitlessly looking for references to myself. I wasn't totally disappointed. Bourdain has picked up my use of the sobriquet "Sgt. Pepper" for Gael Greene, whom he didn't want to call out by name for reasons of gallantry.

And he mentioned my lifetime ban from all the Momofuku restaurants, a distinction of which I am inordinately proud. "There is no question in my mind that buffalo will graze in Times Square — and pink macaroons will fall from the sky — before Josh Ozersky ever makes it through the door of a Momofuku anywhere," he says.

More bothersome, though, is the reason given: "The root of [my] conflict with [David] Chang, it is said, stems from his publication of a Momofuku menu – before Chang felt it was ready for release." What is this "it is said" stuff? By whom? Obviously, by David. But he knows perfectly well that's not true. First of all, I never got any Momofuku menu. I suspect that David has me confused with someone else he hates.

The fact is that I broke the story of Momofuku Ko on Grub Street, thus "it is said" blowing a big New York Times article for him. But I didn't use confidential, embargoed, or off-the-record info; I got it fair and square, the way reporters are supposed to. Prior to that I had been one of his biggest and earliest boosters, and I had no idea, when I walked into Ssam Bar that night, that I was on the enemies list. Subsequently I found out how much the guy hated me. But this hilarious image atop this post, direct from the hand of David Chang, might indicate it. Imagine how pissed off he must have been when I broke the story of Má Pêche on The Feedbag. I often do. It's my consolation for not being able to eat a $180 pork butt, I guess.