It is now week two of America's Top Chef: District of Columbia, and I already miss our tentacled friend, John. Where is he now, do you think? Flowing through the trees of Michigan, I'm sure. I imagine as soon as he got home after his loss he declared to his co-op that he was going on a walkabout. Then his nose picked up the scent of an apricot tree far off in the distance, and he began tracking it through the fields of Detroit. (Are there fields in Detroit? Besides ones of ash, I mean.) "I'm glad I'm off that show. No "producers" or "health codes" to force me to wear shoes in my kitchen," he probably whispered (and lied) to himself, hanging by his legs upside down high up in a maple tree. Anyway, this week's episode involves kids, and schools. Neat!

Our chefs file in for the Quickfire and see this week's guest judge, Assistant White House Chef Sam Kass. Woah! Was Michelle in charge of this hire? I am a straight man, I am just saying I don't think there is a place on that guy where you couldn't crack a walnut, am I right? (No locavoro.) 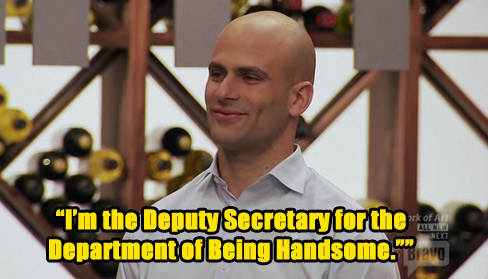 Padma Lakshmi says, out loud, the line, "A successful government is bipartisan, so you'll be competing in a bipartisandwich Quickfire." Jesus. That is not a bit! She said that. I made a joke last week about Padma introducing a bicameral Quickfire and it was nonsense and made more sense than this. Whatever. Good for this show. As they say in politics, go big or go home district.

Teams have thirty minutes to make a delicious sandwich. The chefs pick knives to pair off and the winning team gets immunity. Oh, what a straight forward challenge. They just have to serve a protein on bread and — oh what's that? They have to wear embarrassing red and blue double-aprons and cook their dishes one-handed like they are in a potato sack race but grown professionals who own restaurants? Cool. Almost too cool.

The chefs scramble around assembling ingredients and trying not to cut each other's hands off. I hope someone loses a hand. I mean, I don't, but just to teach this show a lesson, you know? "When you play with makes-no-sense fire, you might get your partner's hand burned off."

Tracy is paired with Angelo, the spy, and is enjoying every second of it. "I had a secret crush on him and now I get to have my arm around him for thirty minutes. Couldn't be better." Watch your back, Angelo! Girl's got big plans, flowcharted below.

Angelo runs a sandwich shop in New York, Xie Xie, and he says he would be very embarrassed to lose. You gotta keep your streak alive, bud. He adds some Japanese sauce to their flounder and calls it "sex on a plate." Tracy looks on longingly. Padma asks them what it was like working together. "She's like my twin sister!" Aw. Way to desexualize her, Angelo. "She is like my sister to whom I'm related and for whom my feelings would never be anything but platonic, as I feel comfortable to tell her about all the other, sexual women I desire." Then Kass makes an awkward joke about them being twins. "Not identical, right?" Well, yes, opposite sex twins can not be identical but I think we are all on the same page of the book called Those Two Don't Look Alike.

I'll be honest. Every team's sandwich looks amazing. I love sandwiches! I am like Joey on Friends. Remember how much he liked sandwiches? A lot. "Could this reference be any more current?" All I'm saying is they should give Joey his own show because I just have a feeling it would work.

We cut to commercial, and this is the D.C. B-roll they run as we come back. 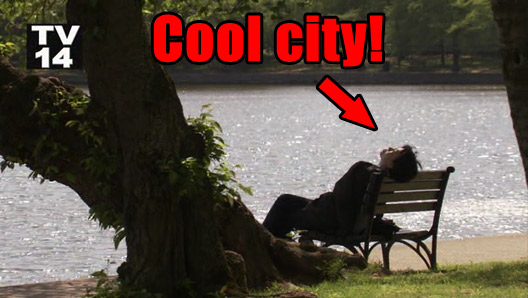 Sam Kass thinks Stephen and Jacqueline's French chicken thing lacked creativity. He didn't like the texture of Lynne and Tiffany's veal saltimboca. His favorites? Kenny and Ed's seared tuna with Asian slaw, and Angelo and Tracy's Asian fish sandwich. The rivalry continues! But his favorite? The twins. 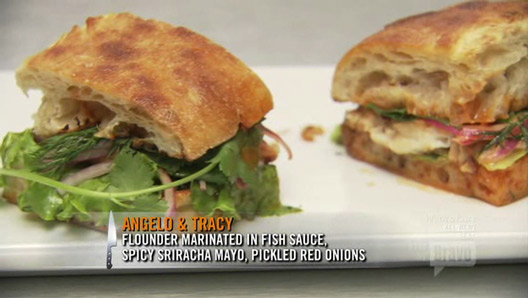 Yeah, that sandwich looks great. I want to eat it. Angelo and Tracy are so happy when they find out!

See what I did there? I made Angelo the scummy one, because he is. Kenny's fuming at Angelo's victory. Tiffany scoffs, "Everything he touches is that good, honestly?" Ask Tracy.

For this week's Elimination Challenge, the chefs will be dealing with a cause very important to the President, the First Lady, and Chef Sam Kass. The three are trying to end childhood obesity within a generation. Wow, is that the challenge? Because that is a hefty challenge and I am not sure these chefs are up to the task. Certainly Angelo isn't. "I think what kids need to do is to try and go running in Monaco more often. Also, definitely be from Connecticut, like me, and be 100% not spies. Who is even a spy? Hahaha."

Four teams of four will have to cook a healthy school lunch for 50 kids, armed only with the restrictive public school budget, $2.68 a child. That is not a lot of money! Arnold, who is turning out to be quite a piece of garbage, interjects insightfully, "When I go out, I spend 130 dollars on myself." Well, you definitely seem worth it.

Tracy and Angelo, as winners, get first pick of their teammates. Everyone, inexplicably, is still wearing their ridiculous double-aprons. The twins pick Kenny and Ed. The rest pair off and get to planning.

Lots of chefs think they will be great at this challenge because they have kids. That may not be an asset for Tracy? She tearfully tells Kelly that she and her girlfriend take their kid out for fast food pretty often, and sometimes she eat hot dogs for breakfast. Um, don't let that happen? Tracy vows to make changes. Kelly listens sympathetically. Oh, correction. Kelly listens sympathetically OVER A NORMAL BOWL OF PATIO LEMONS. 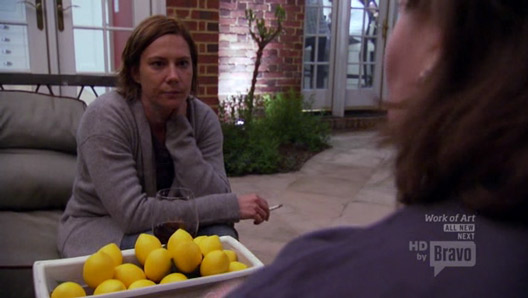 The chefs head to Restaurant Depot and go bananas. (Technically, only Jacqueline goes bananas in that she buys bananas, but you get me.) Amanda screams, "DO YOU HAVE ALCOHOL?" Haha. Good question! Who can forget the alcohol when you are cooking for small children? If you do not have children yet I hope you get that opportunity, I mean blessing, Amanda.

At the register, all the teams are forced to return items and keep their meal under their $130 budget. Compromises must be made. Will they be able to keep it healthy? I honestly don't know what everybody is so worried about with these school lunches. I spent my two dollars in lunch money on snack machine Twizzlers for years and I turned out great. (Though I have dangerously soft bones and sometimes loud noises give me bruises.)

The chefs have two and half hours to prep. Kenny is nervous about his team's lack of vegetables. I mean, one of the vegetables is "a play on" (of course) celery and peanut butter. Good vegetable! Lots of health. Just SNEAK that health into the kids' bodies in a sea of sugar, salt and fat. They won't even realize they are getting all that nutrition CELERY provides.

Team Kelly is butting heads for reasons related to why I am calling it Team Kelly. She is in charge and everyone else is really snippy about who is taking credit for what. Kenny, especially. "I am helping out! We are all a team!" Maybe he's mad because he just made a salsa? Maybe he's mad because no one else is trying to share credit for his cool hat. Doctor Cool Hat. "When I go out I spend $130 on hats for myself."

The school cafeteria's kitchen is small and the teams have to make due. Angelo is having a classic lunch time meal crisis. His foam gun is malfunctioning! "There's no peanut butter in my foam gun!" Vintage. We've all been there. Whenever that happens to me (very often), it feels even worse than when my grandparents had to ration during the War, or what all those Russians who froze had to deal with. As they say, our problems are no less worse, just different.

Padma gets a meet and greet with all the kids. They love her. A lot. Maybe they are big Salmon Rushdie fans? Or maybe it's something else. 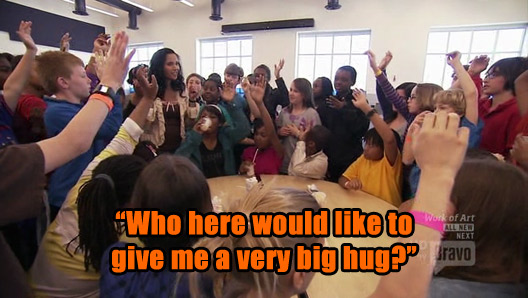 After the meal, the chefs wait around in the Gladware closet. Kevin falls asleep because of how interesting closet waiting is. 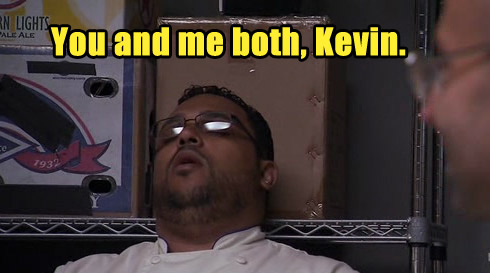 Angelo, Kenny, Ed and Tracy along with Jacqueline, Stephen, Amanda, and Tanisha are called before the judges. Are they the winners? Absolutely not. Angelo's team had a severe lack of anything resembling healthy vegetables, Amanda had disgusting sherry chicken, and Jacqueline's dessert had two pounds of sugar in it and tasted like bread dough.

Things got heated. The judges ask Angelo, point blank, would he have made that peanut butter thing if he didn't have immunity? He takes the fifth, which I did not know was a thing on TV Not Court. Kenny vents that he knew there was a serious lack of vegetables, and then Stephen (Stephen?) chirps in from the other team and says Kenny screwed up by not pointing that out. They start slinging insults back and forth. Settle down, everybody! It's only 125k on the line!

Gail calls out Amanda for her chicken. Amanda meekly responds that she likes chicken with sherry. Gail says, "I love vodka, but that doesn't mean I'd cook with it." Snap.

Back in the closet, Angelo whispers a secret to his big sister. 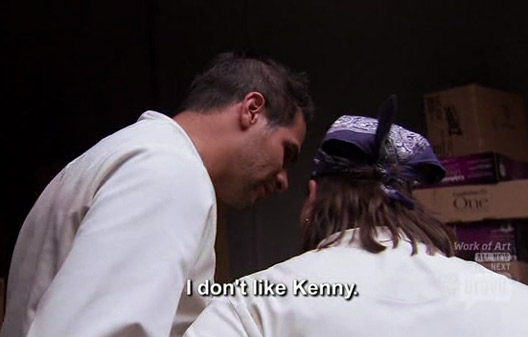 The judges call in Kelly, Tiffany, Arnold and I think Lynne? Speak up, Lynne. They are the winners. Good work, complainers. Arnold should buy himself another hat. The overall winner of the challenge? Kelly's pork carnitas tacos on homemade oat tortillas with pickled onions. I would eat those. A lot of those. 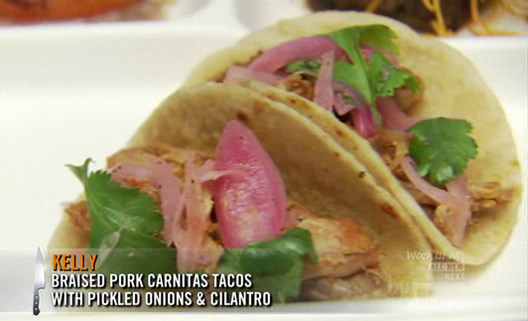 The judges call back the bottom four. Amanda, Jacqueline, Kenny and Ed. Why didn't Kenny and Ed speak up and put more vegetables in? Why didn't Amanda make chicken that did not look like a dump? Why did Jacqueline use so much sugar? All made mistakes, but Jacqueline shouldn't have used so much sugar. She's sent off knife-packing. 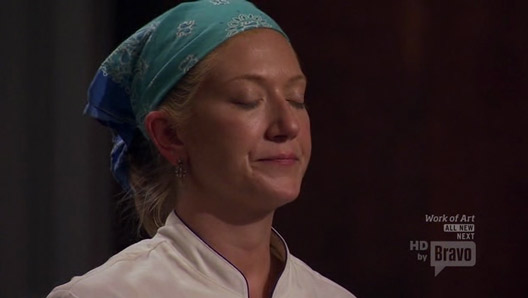 Jacqueline kind of got screwed here. Her dish was a quarter of the meal but she only got 10% of the budget. But Amanda kept her sherry wine? Very dumb. Meanwhile, the rivalry between Kenny and Angelo is only heating up more. Did Angelo throw the match? We will never know. (We will probably know.)