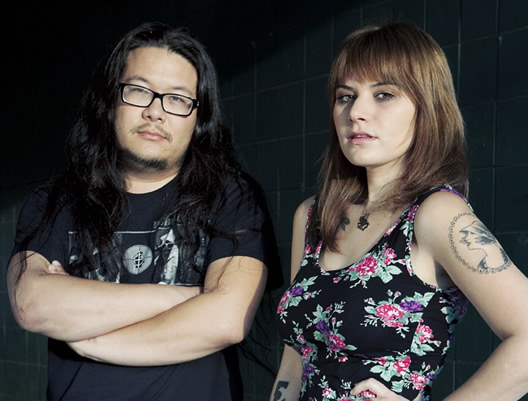 Over the past year, Los Angeles' Best Coast has enjoyed a meteoric rise in the independent music scene, garnering attention from outlets like Spin and MTV. One of the top buzz-bands at festivals like Austin's South by Southwest and Spain's Primavera Sound, they spent most of 2010 on tour, and are about to hit the road again in support of their first full-length album on Mexican Summer, "Crazy For You" (out July 29th).

Best Coast's dream pop songstress Bethany Cosentino is a California girl through and through. Her love of the Golden State's not only evident in her surfy beach tunes, it's also central to the band's dining picks (seriously, don't even get her started on East Coast tacos!). Eater caught up with Bethany to chat about her California foodie pride and favorite spots to hit on tour.

You recently discovered that you have a gluten allergy. In large cities like New York and L.A., it's pretty easy to eat vegetarian, organic or macrobiotic. But how has a gluten-free diet affected eating on tour?

It is definitely hard to avoid things like bread, pasta and pizza on tour. But there was a place in England that we got really into called Marks & Spencer. It's like a roadside rest stop kind of market, but they have all these amazing organic salads and fresh fruit. We ended up going there pretty much every day. On the U.S. tours it's a lot easier because of places like Whole Foods. I actually just started eating salads from McDonald's — they're not that bad!

I've noticed you tweet about hometown restaurants you miss on tour. What are your favorite local spots in LA?

I love Señor Fish! I always miss Mexican food on the road. I even refused to eat anything that resembled Mexican food while we were in Europe because Californian Mexican food — especially from Southern Californian — is so good. Señor Fish is one of my favorite places because they have these fish tacos that are Ensenada style, so it's grilled fish with cabbage, pico de gallo, and guacamole. It's the best thing ever.

When I lived in New York, I would always try to eat Mexican food and it was never any good, so I ended up going to Chipotle all the time. I mean Chipotle's the McDonald's of Mexican food, but I went there because I knew it would taste the same every time I went.

I also love this Vietnamese restaurant in Eagle Rock, California called The Blue Hen. It's all fresh local ingredients and almost all of the items on their menu are gluten-free.

When you're on tour in the U.S., are there any cities you particularly look forward to for the restaurants?

Probably New York, of course. There's this great place in the West Village called Risoterria and it's all vegetarian and gluten-free Italian food. Even if I wasn't gluten-free I'd still want to eat there — they also sell their own fresh-baked loaves of gluten-free bread. Another great restaurant we like to eat at in Brooklyn is Wild Ginger. I think that New York really has some of the best food in the U.S. and so many options. But California still has the best Mexican food, I'm going to stand by that!

Touring is a lot of long hours and navigating unfamiliar cities. With that in mind, do you guys have any favorite chain restaurant standbys you hit regularly?

I actually really like P.F. Chang's because they have a gluten-free menu and everyone in the band still likes eating there. I get really excited because I love Asian food but soy sauce has wheat in it and most Asian food is cooked with soy sauce so there's not a lot I can eat. But P.F. Chang's actually has their own gluten-free Tamari sauce they use in everything.

Do you guys ever get to splurge on fine dining while on the road?

Usually it's crazy hours and we end up at fast food places, but there is a place in Los Angeles I love called M Cafe. I just found out they're going to be opening one in New York, too. It's macrobiotic food so it's more expensive, though it's not technically a sit-down dining experience. They have the most amazing food. It's Gwyneth Paltrow and Madonna's personal macrobiotic chef who branched off and opened this restaurant. It's really some of the freshest prepared food I've had and you feel so great after you eat it.

With the rise of gourmet food trucks across the country, you guys ever take a gamble on street food in new cities?

Yeah, our bassist Bob is really into street food. Not so much in New York but in L.A. we have taco trucks, hot dog trucks, Korean BBQ trucks — and they're everywhere. There's also a really famous deli here called Canter's and they have a truck. In fact, one time we were playing at the Echoplex and the Canter's truck was there that night. Bob freaked out and wouldn't let anyone in the band go home until he got this huge pastrami sandwich. We're definitely into the mobile food craze and try to hit food trucks in new cities, too.

There was an article in the New York Times recently talking about a food trend sweeping the nation called "haute stoner cuisine," where pot-smoking informs the menus of major restaurants like Kogi in L.A. and Momofuku in New York. I know you recently did an interview with High Times magazine, so on that note: are there any novelty stoner dishes you've come across on the road?

You know, it's crazy, but on that subject there are a lot of pot dispensaries in California and many of them sell edibles. Because it's L.A. everyone has a weird dietary need, so you can actually buy sugar-free ones, vegan ones, I haven't come across one with gluten-free edibles, but they even sell hemp olive oil and pot hot sauce. It's so weird! There's a publication here in L.A. called L.A. Record and I went to their Christmas party this year. They had so many edibles including this thing called "Lazy Lemonade" — lemonade with weed in it. It's actually kind of bad because we just kept drinking the lemonade and eating popcorn with weed butter on it — you don't realize how high you're getting because it tastes really good. But as far as real 'stoner cuisine' meals, I think anything cheesy, rich and sweet tastes better when you're high.

And finally, time for a lightning round!

Best Coast: "When I'm With You" (an Eater favorite!)

Best Coast's Crazy For You is available for pre-order on Mexican Summer.