What NYWFF Ticket Sales Say About Our National Character

Share All sharing options for: What NYWFF Ticket Sales Say About Our National Character

Yesterday tickets for the New York Wine and Food Festival went on sale. The weekend in October is like the Aspen Food and Wine Classic but for the hoi polloi, a branding branded joyous circle jerk of Food Network personalities, actual chefs, the various clown fish who crowd the culinary coral. It's fun, in other words. But as of last night at around 11 pm, when I went to look at ticket sales, I accidentally discovered the future of our nation.

First of all as we can see in Exhibit A, no one cares about sustainable sustenance, even if the chef (Dan Barber) once fed the President of the United States. Instead, people love Eater and, on average, love Eater $400 more than they love a White Truffles dinner. Or rather, people love Eater with a love-to-cash differential of around $400.

In this, Exhibit B, we see no one is willing to pay $65 for the completely confusing Meatpacking Uncorked presented by The Corcoran Group event on Friday which seems to combine a real estate company and the act of uncorking a piece of meat? On the other hand, $225 is a bargain for 26 burgers and, hopefully fingers crossed, an awesome cover band. Americans: We make sense sometimes. Other times we don't but we do love cover bands. 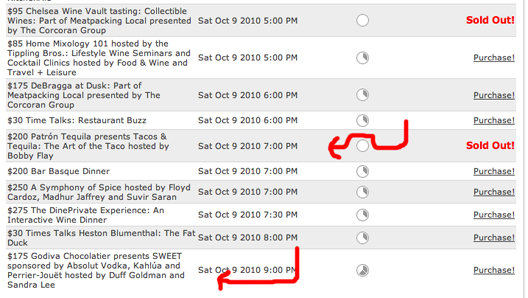 Finally, in the last exhibit, we see that Godiva Chocolate, Absolut Vodka, Kahlua and Perrier-Jouet aren't enough to entice people to pay $175 to party with Sandra Lee. This is singularly the most hopeful data to emerge from this exercise. On the other hand, tacos and tequila are enough to bring people into close proximity to Bobby Flay.

Conclusion: America, not quite Rockwell but not that bad either.