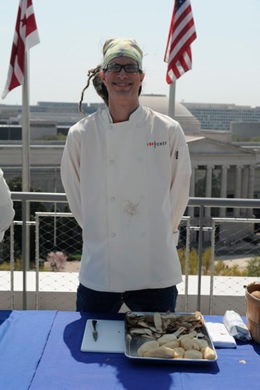 The grandees at Bravo have whored out their exit interviews to some Kikkoman integrated branding platform initiative. Don’t make us none. We’re still going to be interviewing the Top Chef flunk outs. Just in our minds.

You’ve got a good case for insanity. I mean, buying frozen pastry dough for your first dish.

Yeah. Well, I figure if the show on which I am appearing is hawking Doritos, Twizzlers, Toyotas, Twinkies and Swanson, why shouldn’t we be able to take advantage of such pre-packaged foods. Why should they have the monopoly of power in terms of when we should be able to use crappy product?

Yes, “Yes Sir!”
Yes.
Yes, I am saying, yes, I do do that. I begin my journal entries by writing Yes Sir! It honors the goddess in me and the goddess in us all.

Also, did you seriously write, “Lots of noise, lights phones. Pillows there a bit soft, a testament to the luxury of Hilton”?
Deadly serious. Bravo actually is holding my youngest daughter hostage and said if I don’t write positive things about Hilton Hotels they would kill her. Please don’t publish this.

That’s what they call a 360 degree integrated platform!
Joshua, I am begging you.

Ok John! Thank you for your time.
Josh, you won't publish that right?

[There's a high pitched plaintive moan. John's eyes get larger and larger until they merge into one fiery Cyclops eye. His dread lock snakes to vertical, and lashes menacingly about like a tentacle. His flesh, already tight across his lanky frame, draws tighter until his skeleton pierces the surface.]

I SAID, DON'T PUBLISH. BY THE DARK LORD, ZARTHRON, I SHALL DESTROY YE!

[In a desperate attempt to escape, I throw a bottle of Kikkoman's BBQ soy sauce at John's uni-eye. The bottle explodes mid-air, struck by John's dagger-tipped dread lock. I begin the sad task of texting all my friends and relatives the news of my impending doom. But a drop of the soy sauce, attached to a shard of glass, finds its way into John's eye. He blinks and blinks again. I take the moment of reprieve to dash past him to freedom.]