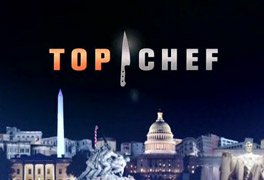 And, we're back. Didn't Vegas just finish? Yesterday? It feels like yesterday. I, for one, am still not over Kevin Gillespie's loss, and I personally taste the bitterness of his defeat in the back of my throat every time I swallow. (Oh boy.) But life is about moving on and sloughing off tragedy (how is it people are still talking about the oil spill when Kevin lost a cooking reality show eight months ago?), so let's all try to keep our eyes dry and focused on Washington D.C.

Did you know it's our nation's capital? Don't worry; if at any point this season you forget, a whole team of Top Chef assistant producers have almost surely written endless reams of copy to constantly remind us of just that kind of brain dead Kid's Meal placemat trivia. "Here in the nation's capital, our legislative branch is bicameral, so for today's Quickfire you must buy a camera and then take a picture of yourself cooking a legume on a piece of slate with a branch...." I am already exhausted.

Seventeen cheftestapants have traveled to D.C. to compete for $125,000 and something something Food & Wine Magazine. As has been the case the last few seasons, by and large the chefs are very qualified. They own restaurants, they've worked with Jean Georges, and they are here to represent and/or win. They are also numerous and, for now, forgettable. I am not going to bother introducing them all because most will be dead (eliminated) before you know it. It's like washing your face. What's the point if you just have to do it tomorrow?

A few do stand out. There is Tiffany. She started as a cook at IHOP but now thinks she has what it takes to be IHOP Chef, I mean Top IHOP Chef, I mean the Mayor of Just Pancakes Town. There is Kelly Liken, a chef/owner from Vail. She is only memorable because she looks really familiar to me. Does she remind anyone of an actress? Real question. Please help me out in the comments so I can start forgetting her. According to her bio, besides loving crazy ugly cowboy boots, she also has a "strong commitment to locally sourced organic ingredients." Oh, how novel. What a bold statement in this day and age. It really contrasts sharply with the bio of Chef Fakeface, who says, "if it doesn't come from a can with a dust on it, I'm not letting it anywhere near my diesel microwave."

And then Angelo. Angelo is one to watch! If you like watching insufferably arrogant people from Connecticut who neither look nor sound at all like they are from Connecticut. After mentioning to Timothy the chefs he's worked with, the Michelin star he's earned, and the time he recently spent in Monaco (Monaco!), he asks Timothy if he's ever been to France. Ugh. I think he's a spy? "A small town in Connecticut" is exactly the sort of place a spy would say he's from. "One of my favorite parts of growing up in small real town America is the super cool nights at the baseball track watching everybody eat pie apples and wear their rock and roll blue jeans." Makes sense he's here for the D.C. season. "Just a real curious question, guys. When do we get to cook in Pentagon? It'd be real fun to make food right next to the secret document room. By the way the cooking tool I brought from my restaurant is a copy machine. Let's get spying I mean whatever answer makes you less suspicious!"

Speaking of outsiders, John is the real star. He's got lots of charming tics and a bandana and one giant dreadlock (almost TOO sanitary) and he says he feels like a "stranger in a strange land." Oh, I think I "grok" what you're saying, John. What you mean is that you are surrounded in this competition by a lot of young, city-dwelling fast paced superstar chefs, while you are literally from another planet where food's absorbed through the hair and converted to beams of pure solid light energy for use in the spice mines. I get it, you're different! No joke, that tail on your head is so intense. What's living on Pandora like? Do you ever plug your dreadlock into your hackie sack to speak to the sacred Home Tree? 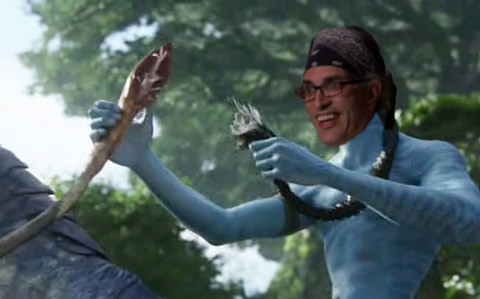 "My Native American name is Makes Apple Butter With Feet."

The first Quickfire of the year is my favorite kind: knife skills! The chefs have to peel ten potatoes. The fastest twelve move onto brunoise cut ten cups of onions. Eight winners then break down four chickens. Finally the four winners of that compete to cook a dish with those ingredients. I like it! Keep it up, Top Chef.

Kenny Gilbert, a well-dressed and very confident chef/owner from Colorado, handily wins the potato challenge. And the onion challenge. And the chicken challenge. He is very fun to watch! I literally got a thrill watching him snap the thigh off the chicken. I mean, these are tasks normally handled by prep cooks and such and maybe say nothing about his ability as a chef, but it is already fun to imagine we have another Hung in our midst. Remember Hung? Love that guy. Hope he's up in Heaven smiling down on us.

Kenny, Angelo, Timothy and Kevin make it to the final round. They have thirty minutes to make something with chicken, onions and potato along with whatever is in the "pantry" (table of shit on this terrace of a museum). Too much cream and too salty a broth put Timothy and Kevin on the bottom, respectively. The judges like Kenny's plate, but Angelo's perfectly cooked chicken, onion jam and potato noodles win him $20,000. He is already saying he wants to be the first contestant to ever win every challenge. Kenny sees him not as a threat but an "obstacle." Already a rivalry!

The four chefs from the final round get to pick their teams for this week's Elimination Challenge. As each team is competing among itself for both the best and worst dish, it behooves the team captains to pick the worst chefs for their team. As we're only going off some vegetable chopping and small talk before the Quickfire, it gets a little awkward! There are POLITICS involved. (You know, because D.C.) Whatever. They are all now on four teams and they have to each cook a dish representing their home district (LIKE IN CONGRESS) for some Cherry Blossom charity thing.

As the chefs check out their fancy townhouse digs, John takes a moment to write in his diary and reflect. He wants to do better! Also, thank you thank you gods at Bravo HD for putting up a still of what he's writing in his diary. "Tough nite sleeping as it always is in a big city. Lots of noise, lights, phones and illows that were a bit soft. Able to finish my routine as usual." Routine? I like to imagine it's making a fresh pot of almond milk by crushing the nuts between between his dreamcatchers. 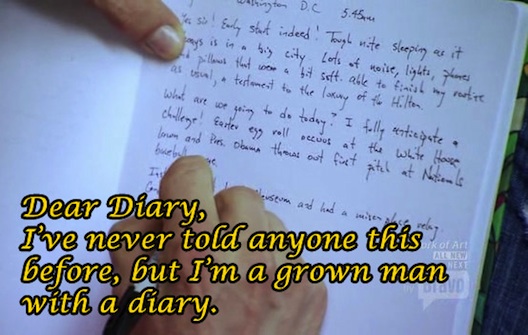 After some shopping and prepping, the cheftestapants show up at the banquet hall and begin serving lots of "well-dressed" and "cool" D.C. people. You try so hard, D.C. It is adorable. There was a New York Times Magazine article recently about the Obama White House's young staffers and how they were playing by their own rules and making D.C. cool again. No longer Hollywood for Ugly People! But then the article went on to describe what their "cool" was and frankly it sounded pretty embarrassing. Lots of beer pong and sweatpants and awkward white people trying to dance to Jay-Z. That's your city. (I kid D.C. because I love it. Definitely has both one of the best Holocaust museums AND Lincoln memorials.)

Our judges arrive and look great. I couldn't be happier about Eric Ripert joining the Judges Table more full time this season. Padma actually seems to be glowing. Like, is she physically in the middle of giving birth during this dinner? She must have had a team of horse trainers wrestle her into that dress. Did you hear she had a baby? With some guy from Dell, I think? This is the what she saw right before the baby "happened." 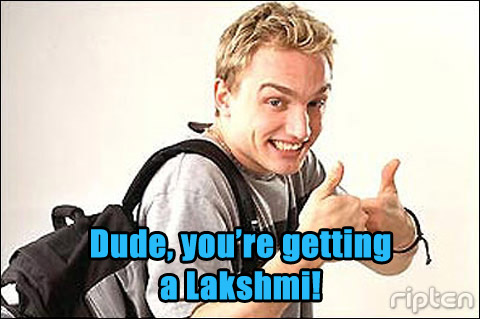 (An aside: I did a show at Le Poisson Rouge, a club in New York, on Tuesday night and the Dell kid above, Ben Curtis, was my bartender. He was very nice! Seems like he's doing well. Thought you should know)

After some eating and some chatting, we convene at the Judges Table. Angelo, Kenny, Alex and Kevin are called in. They are the top of each of their respective teams! Kevin, Kenny and Angelo were also their team captains so I guess they chose wisely. But the overall winner with a really great looking arctic char sashimi with bacon froth is Angelo. Two for two, and our rivalry between Kenny and Angelo continues. Good season already!

Stephen, John, Jacqueline and Timothy bring up the rear. Each blew it in their own special way. Timothy cooked his monkfish with the skin in, causing ol' fish-head Ripert to bristle, and it's especially embarrassing because he was a team captain and had his choice of terrible cooks to compete against. Stephen took a perfectly nice piece of steak, cut it up and breaded and deep fried it, leaving it ruined and overcooked. Jacqueline decided to not strain her chicken liver terrine, leaving it grainy. She also didn't use fat? Nobody at the Judges Table liked that, and she claimed she didn't have her recipe memorized. Well, that is embarrassing. And John, poor John. He hails from Michigan and said twice that "maple flows through the trees" there, so he made a maple mousse. But he used a store bought pastry shell and also the mousse didn't taste like maple. Nice one? Not a nice one.

And John is our loser. He gets very emotional, nearly emotional as I get. It was clear that John was going to be the most fun to write about, but now he's gone. Are you allowed you write in your diary in heaven? I hope so. 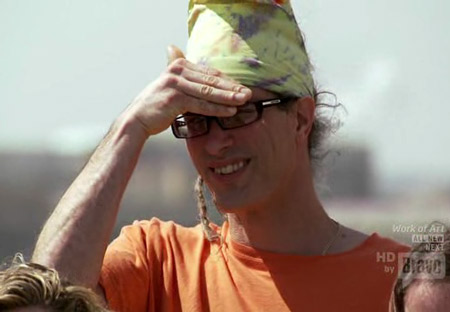 John, we salute you too. (You are very bad at saluting.)

And so begins another months-long journey towards cable-TV fame. Angelo's a clear favorite but there are literally 13 chefs whose names I don't know yet, so we shall see. We're all winners for watching. See you guys next week!