Share All sharing options for: Canada Tries to Steal World's Largest Hamburger Record From the United States of America

How do you cook a 300 lb hamburger the size of a monster truck wheel? With a specially designed, hydraulics-enhanced, dual grill robot of course. This "Monster Grilling Machine" even flips the burger midway through the cooking process. The device was created by Napoleon Gourmet Grills for the sole purpose of cooking a sandwich to beat the Guinness World Record for largest burger, currently held by the Guinness Burger from Mallie's Sports Grill and Bar in Southgate, MI which finished at 186 lbs. Canada is trying to steal the record for world's largest hamburger!

So today in Toronto: the patty started cooking at 4AM this morning, and by noon the sandwich's prep was complete. With a bun and fixins, it clocks in at a whopping 590 lbs. The Guinness people haven't officially declared it the biggest burger of all time yet, and according to the Global Toronto, the organzation "will make its decision in the coming weeks," so who knows if a spokesperson is even there. But, the burger nearly triples the weight of the previous record holder. Also: according to the Guinness site, the official title is "Largest Hamburger Commercially Available." This monster burger is made by a grill company not a restaurant, and is presumably not for sale, so there's a chance it might qualify for the record at all.

The burger robot in action: 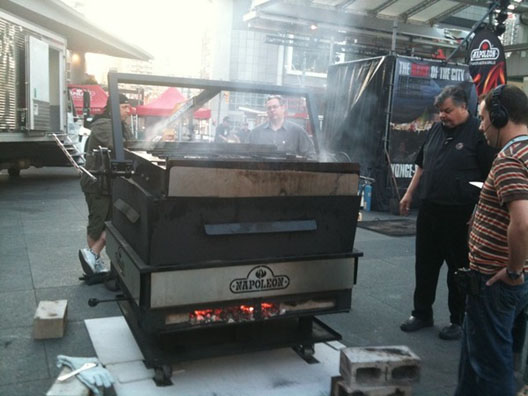 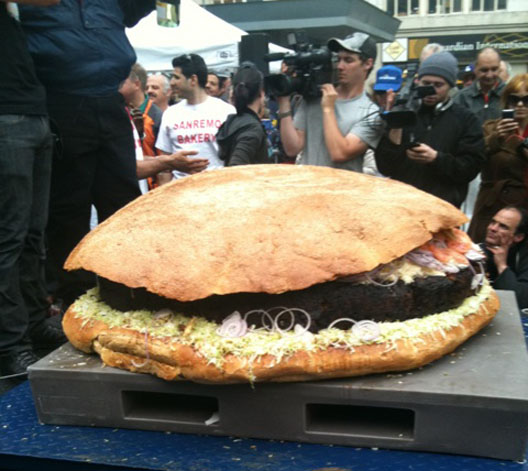 Video of the final preparation, and weighing: