The Early Word On Top Chef: The Tour

Share All sharing options for: The Early Word On Top Chef: The Tour

Top Chef: The Tour is now underway, bringing former contestants to parking lots in 21 cities across the country via giant orange orange truck. The contestants on board this year vary from city to city, but so far, Nikki Cascone, Eli Kirshtein, Richard Blais, and Kevin Gillespie have all made appearances. What to expect: an evening of cooking demos, Q&As, meet-and-greets, and games including a blindfolded taste-test and... minigolf?

The tour, which started two weeks ago, is totally free, so there's nothing to complain about, but still! Cranky bloggers will be cranky bloggers, and a few that have attended were less than thrilled by the food prepared by the TC alums, even daring to question the entertainment value of the show overall. 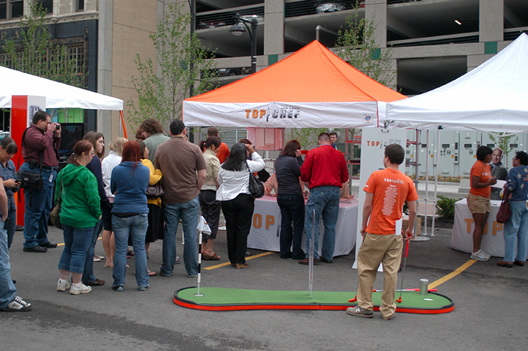 The Good News: A blogger who caught the Kansas City show wasn't a fan of the food that Nikki Cascone and Eli Kirshtein made, but thought the duo put on a good show: "My favorite part of the event was the Q&A, though...One of the things that cracked me up was Eli and Nikki talking trash on some of the more well-known chefs of the world, particularly Bobby Flay (“Just throw it on the grill with some chipotle in adobo and some cilantro.”). I was actually really surprised at how open and honest they were, pulling no punches about the contestants they competed with (Eli still hates Robin, it seems) and the challenges they competed in." [Shane Life]

The Bad News: A Pittsburgh Blogger who discovered the show by accident,was not impressed with the chemistry between Eli Kirschtein and Richard Blais: "I stayed long enough to watch them do a cooking demo to an audience of around 30 people. Like monkeys at the circus, they bantered back and forth in hopes someone would throw them a banana. “Dance?monkeys?dance,” I kept thinking to myself as they fumbled through an increasingly uninteresting cooking demonstration. I actually lost interest about halfway through and decided to move on with my day." [Culinary Cory]

The Great News: An attendee of the Atlanta show featuring Kevin Gillespie and Richard Blais, liked the enthusiasm of the contestants: "Richard and Kevin made quite the team. While Richard was the center piece of the demonstration, the two made a clever, and funny, duo. They were goofy, made jokes (some good, some bad) and actually seemed like they wanted to be there. If ‘The Tour’ comes to your town, I highly recommend checking it out. " [Gluten Freedom Atlanta]

The Not So Hot News: This Kansas City blogger was not impressed by the food served to attendees, and was particularly disapointed with the culinary content of the show, on the whole: "if you're a Top Chef Crack Monkey by all means, hit the tour when it comes to your town. Buy some t-shirts or cook books, play putt putt golf. But if you really want to taste a chef's food and support your Top Chef favorites, seek out their restaurants and put some coin in their pockets. "