In today's issue of the New York Post, page 44 to be exact, there appeared to be a potentially major spoiler as to the winner of the current season of Top Chef Masters. Since some people don't want the suspense of a reality show ruined, we include the scanned image after the jump: 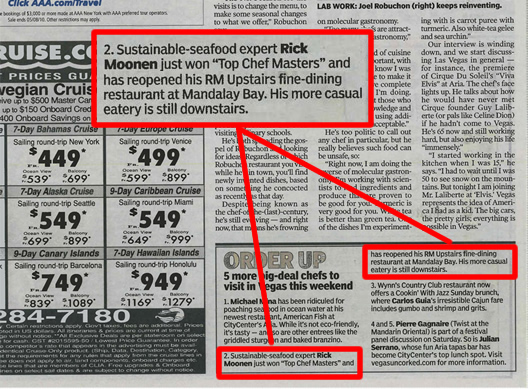 Perhaps the Post is confused? Moonen "won" episode three by advancing to the Champion's Round, but came in second with 16 stars to Jonathan Waxman's 18½ stars. So he didn't really win that episode. And the only thing left to win at this point is the whole shebang.

But! This spoiler directly contradicts with Time Out New York's recent spoiler that Marcus Samuelsson won. So who knows? Are these "spoilers" planted by Bravo to generate buzz and confuse their fans? Is Bravo that sneaky?