6:40 Visiting blog dignitaries Paolo Lucchesi and Zach Brooks from the west coast in the house!

6:43 WINNER Outstanding Wine and Spirits Professional Award: John Shafer and Doug Shafer from Shafer Vineyards, Napa, CA. (Interesting, because nominee Paul Grieco for sure had the most cheers of the night.)

6:55 One James Beard award winner (who will remain nameless) explained how she dealt with her hangover after the media awards and the Best New Chefs party: "I slept all day and then I ate four bacon sandwiches. Then I came here. I can't wait until this is over so we can just all celebrate."

6:57: Here's something funny: two out of the three announcers (Lidia Bastianich and Wolfgang Puck) have crazy strong accents. That plus all the noise in the press room (and the free flowing bubbly) is making this a little hard.

7:06: Ed Levine is working the floor with a Beard Award hanging around his neck, channeling his inner-Josh Ozersky. Most of yesterday's winners left their prizes at home.

7:09 One funny flub of the night: whoever is in charge around here forgot to get presenter Lee Schrager for the first award. "It's not like I wasn't waiting here for an hour before." They grabbed him just in time to run up onstage and hand away the Beard.

7:30: Walking behind restaurateur Drew Nieporent is funny (ego-crushing) because everyone in the room says hi as he passes. Then he greets his friends by yelling, "Where are the drugs?" and complains to the bar man for only stocking gin and not vodka.

7:45: Word in the press room is that Todd English is already smashed. True or not, you can't really tell by looking into those bedroom eyes.

7:47: Flo Fab just walked by. A) She is not live blogging. B) We think her picture might be air brushed. Also, she cut in front of us in line.

7:50: EMP GM Will Guidara confirms there will (as there was two years ago) be a massive after party at the restaurant. Ma Peche—even though the Momo Book lost—is also on the after party circuit.

7:51: Per @thefeednyc: "Danie Humm says he is going to reinvent the wheel at emp. new menu in 3 mos. fewer choices something "we've never seen before."

8:02: Ted Allen to the stage for the book recap! Bathroom break! 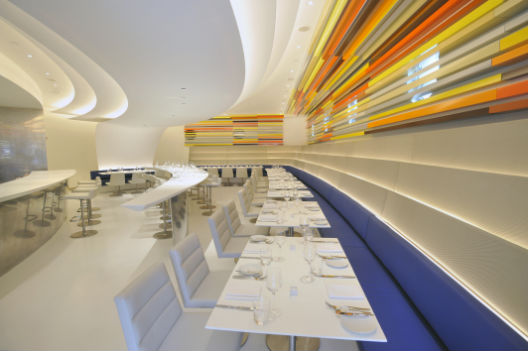 8:17: Kate Krader, queen of New York food media, finally rolls into the press room with Mario Batali on her heels. Just as quickly departs into the hallway.

8:25: All of the print media people in this room already know all of the winners. Maddeningly, they're smart enough not to share with us.

8:27: Gossip: San Francisco chef David Kinch was stopped at the door last night at Bon Ap's Chefs' Night Out Party. EIC Barbara Fairchild had to go out and fetch him.

8:40 Ruthbourdain is blowing up the Twitter tweeting: "I must be starving because Mario batali's shaven jiggling neck fat is making my mouth water"

8:51: WINNER: Best New Restaurant: Marea, NYC, Chef/Partner: Michael White, Partner: Chris Cannon. And they just got added to the after party circuit. All powerful PR maven Jennifer Baum gets a shout out.

8:55: The home stretch people. The press room is thinning out as people quietly sneak out to chow down at the gala.

8:57: WINNER: Outstanding Restaurateur: Keith Mcnally! But he didn't accept the award. Some lady His daughter appeared in his place.

9 PM: BEST RESTAURANT WINNER: Daniel! We knew Boulud couldn't get out of one of these shows without a medal. Congrats D-Bigs. "A wonderful journey" since he won his first Beard award in '92. "For everyone who is beginning this journey, I wish him a good journey in this industry."

9:10: And that wraps it up for us! Expect a very, very hungover restaurant industry tomorrow.