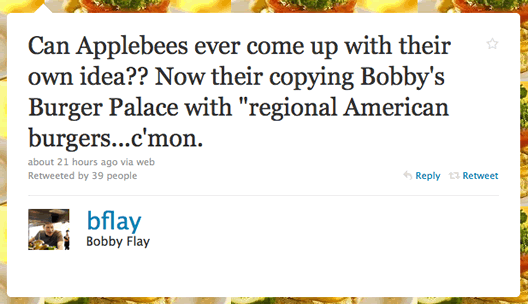 Chef/restaurateur Bobby Flay is accusing the corporate restaurant chain Applebee's of "copying" the menu concept of regional American burgers from his mini restaurant chain Bobby's Burger Palace, tweeting "Can Applebees ever come up with their own idea?? Now their [sic] copying Bobby's Burger Palace with "regional American burgers...c'mon." Ingenious corporate intellectual property theft? Or just a chain following the zeitgeist? 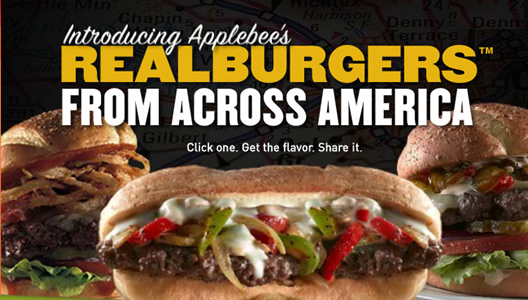 Flay is understandably incensed. His menu — that dates back to 2008 opening of the first location in Lake Grove, NY — is, without a doubt, his style. Burger expert Nick Solares' noticed it, writing in his review, "The regionally named burgers... are where Flay's chef background manifests itself."

The problem is that offering "regional" burgers is not spectacularly new; local diners and restaurants have been doing such a thing for a long time. Bobby Flay may have come up with a menu that focuses on regional burger variations (and making it the crux, the raison d'être, of his Bobby's Burger Palace chain), but it's not like he invented the idea of putting pickled jalapenos and queso sauce on a hamburger.

And if anything, the regional burger theme is an ongoing trend with the corporate restaurant chains: see Applebee's Realburgers (Philly, Cowboy, and Santa Fe burgers) and some of the Cheesecake Factory’s Glamburgers (Sonoma, Memphis, Monterey).

Offering different variations of hamburgers is an easy way to draw in a budget-conscious crowd: "Patriotism always sells," wrote Burger Business back in April, the website that ran a post last year with a list of restaurants from all over the country, big and small, offering "burgers that salute cities, states or regions."

All that said, Applebee's and Flay's burger menus are somewhat similar, almost eerily (see below graphic). Did Applebee's (and the Cheesecake Factory for that matter) rip off Bobby Flay's menu concept? Is it outright copying? In this specific case, it's impossible to tell. But we wouldn't put it past the big restaurant chains to at least draw inspiration from smaller, successful chains, especially those helmed by celebrity chefs. 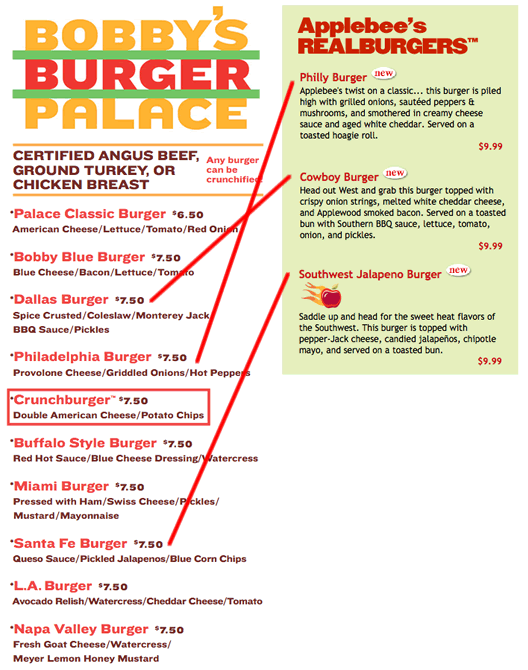