On Season 2 Episode 8 of Top Chef Masters: We learn who has the best palate, who talks more about sex than Gael Greene, and yet another Western thing that confuses Susur. This week's contestants are Susan Feniger, Susur Lee, Rick Moonen, Marcus Samuelsson and Jonathan Waxman. 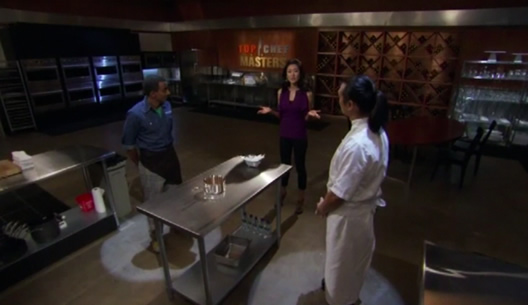 It's the sauce tasting challenge from Season 5! Susan has seen it before and is "totally freaked out. I haven't done classic sauces in twenty seven years, so this is not going to be pretty." Susur, on the other hand, is "really excited. I have an extremely good palate. It's like music; you hear something, you know "oh, that's guitar, that's trumpet." That's why I'm very confident about this challenge." The first round is a sauce Chausseur. Marcus claims he has "an impeccable palate" but doesn't get a chance to flex it in this challenge—he calls Susur out on his claim of six ingredients and Susur gets six right. Susan gets called out by Rick on her bid of six and loses by misidentifying the sauce; she names red wine when the sauce has white wine and red wine vinegar. 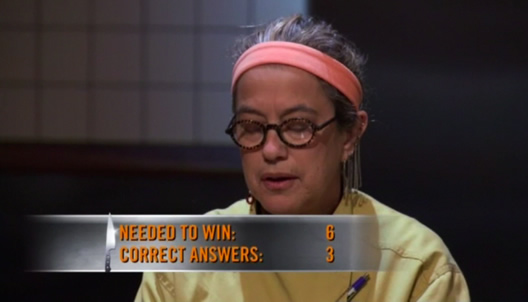 In the second round, a Thai green curry, Jonathan strikes out by naming butter. Butter! In a Thai curry! He wonders why he didn't say ginger instead when he had ginger stuck in his teeth from the sauce. In the third round, Susur loses to Rick by incorrectly naming garlic as a component in the lobster sauce and as usual, he's less than pleased to have lost yet another Quickfire: "I was completely pissed. How the hell you make lobster sauce without garlic?" It's beginning to look like Susur will make it to the Finals without having won a single Quickfire! 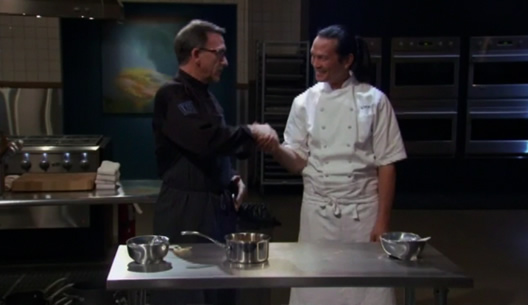 The chefs pick knives and each one has the name of a Greek god on it: Poseidon for Jonathan, Aphrodite for Susan, Ares for Marcus, Hades for Rick, and Dionysus for Susur, who doesn't know how to pronounce "Dionysus" and has no idea what's going on. Deja vu to the Simpsons and tail gating challenges from previous weeks? The challenge is to cook for their assigned god, preparing tasting portions for 50 people, and he says, "I don't understand how to cook for this god. This is not part of my culture. I think I'm going to have a big problem." 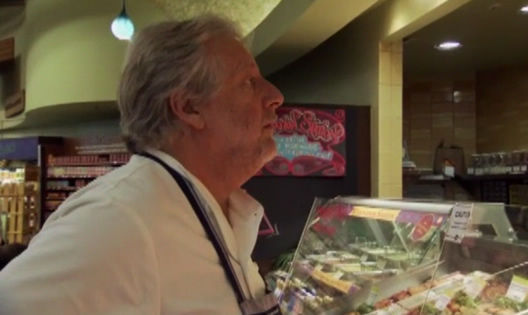 At Whole Foods, Jonathan's annoyed because he's got Poseidon and Rick wants to do seafood, as usual, despite having Hades—but Marcus beats them both to the counter and orders scallops, as well as 50 oysters. Wait, aren't they supposed to cook for 50 people plus the judges? Shouldn't he be ordering back-up oysters in case a few go bad? Uber competitive Marcus has Ares, the god of war, and he's got a game plan: "In Ethopia, lots of dishes were created in times of war, and they're all raw or tartare based because you didn't want to create a lot of smoke or fire so the enemy would see you. I decided to cure beef, salmon, scallops. Put that together." Which sounds awesome—except that later in the episode you realize his dish has neither scallops nor oysters.

So why did he order them? Did he decide not to use them when he got back to the kitchen? Or did he order them at the counter and then cancel his order once the others were gone as part of his game, to fuck with Jonathan and Rick? If it's the latter: that's diabolical! AND it gives me hope that at one point during what's left of this season, Marcus will give me what I've been longing for these past few weeks and finally say my favorite reality tv cliche: "I'm not here to make friends." Pretty please, Marcus? With a cherry on top? A Ethopian-Swedish cherry? 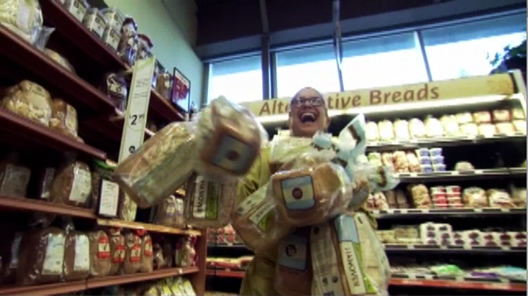 Susan is totally out Gael Greene-ing Gael Greene as she shops for ingredients for her Love Custard: "It's creamy and silky and sexual. (...) It's loaded with eggs and she's the goddess of reproduction. I just can't imagine a more perfect dish for her." Later on she says, "Coconut is loaded with a compound that increases hormone activity in men and women. It sends them orgasmic." If you know Susan Feniger and her cooking, you've surely already deduced what her dish is, and sure enough: "I'm making this Singapore street food that is a very rich coconut milk custard, which is called kaya. It's the dish that's been most written about in the last eight months since opening Street."

Meanwhile, Susur, who still doesn't understand the challenge but has decided to drench pork in wine because he's got the god of wine, has had somewhat of an epiphany and says, "Bottom line: the myth doesn't matter. The food gotta taste great because you're cooking for 50 people and you have to cook for the judges." Jonathan strongly disagrees: "Susur is an overachiever. If you play to the critics, you're an idiot, I think. You play to your god. That's what the marching orders are." Well, if there's one thing we know with certainty about Susur, it's that he's an overachiever—and that's been working really well for him so far with the judges. Meanwhile, Jonathan's been at the bottom two weeks in a row. Does that mean he's not as good of a chef as Susur or anyone else on the show? No, of course not—but Top Chef Masters is a completely subjective competition; if you want to win, you have to play to the people grading what you do. I love watching Jonathan do what he does and I'd be more than happy to eat everything he's prepared this season, but it's pretty obvious he's not well-suited for this particular kind of competition. 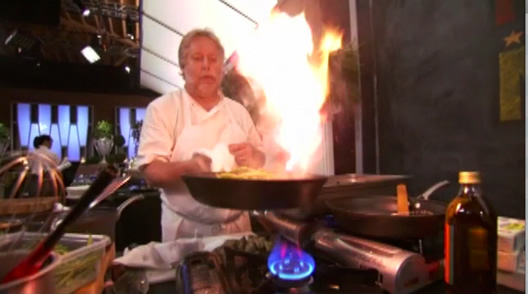 Susan's dish is the most popular one at her new restaurant and a good reflection of her as a chef. She says, "I think being a hippie at heart really influences my cooking because I like really down-to-earth dishes. I think it's about the taste. You know, I don't use expensive ingredients, it's just not my style. I just hope my dish is not too simple for the critics." Susan's essentially presenting two slices of toast with jam and an egg, and as I discussed in last week's recap, plating is her great weakness and one that's gotten her into trouble with the judges time and time again this season. Simple dish + weak plating at this point in the season = not the rosiest outlook, even if she did sweep last episode. 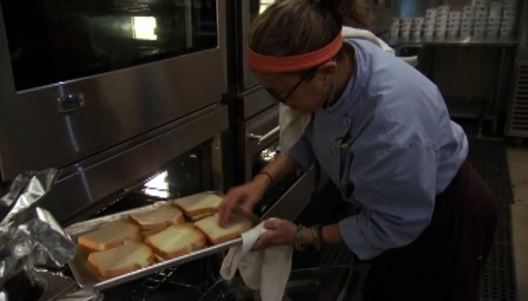 Marcus, for Ares: cured beef and salmon with apple broth and oyster foam 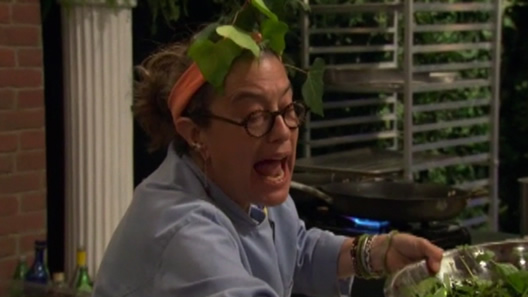 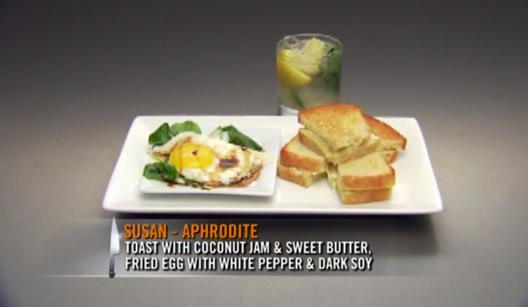 Susur gets compliments on his use of ingredients and says he's used to cooking in a confined space. Jonathan owns his messiness, gets called on his scallops not being properly seasoned. Marcus is told his flavors were too strong. Gail liked Rick's potatoes, Jay disliked his swordfish. Susan's asked whether she ever questioned the wisdom of essentially making a sandwich for this challenge, this far into the competition. 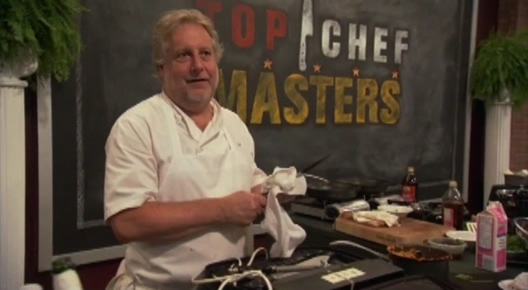 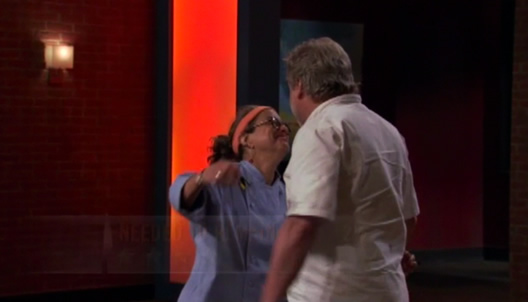 Rick Moonen WINS, with $10,000 for the charity Three Square; Susan Feniger is OUT, having won the most money so far this season, with $32,500 for the Scleroderma Foundation.