A Stern Rebuke to Sam Sifton

Share All sharing options for: A Stern Rebuke to Sam Sifton 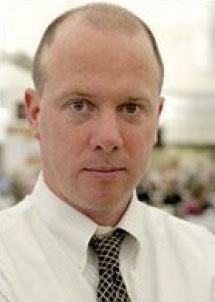 Every once in a while, Eater rummages through the trash of restaurant critics like some sort of crypto-culinary A.J. Weberman. This weekend we uncovered a dispatch from the Conseil Restaurant Association Professional Société [C.R.A.P.S.] in the refuse outside the house of Mr. Sam Sifton, the restaurant critic for the New York Times.

It was with keen interest that we read your recent review of Zakary Pelaccio's Fatty Cue, a restaurant in a town called Brooklyn, far from us and from the burled walnut conference table around which we are gathered. In this review, we noticed, no lofty adjective was too complimentary to describe Pelaccio's "Malaysian-ish" cuisine nor jibe too snarky or generalization too vulgar for you to load into your critical apparatus and to fire Easterly, toward Pelaccio's (and Williamsburg's) general direction.

In the end, Sam Sifton, you awarded Fatty 'Cue only one star—which to some means good but to most doesn't—ending your review by admonishing Pelaccio for the loud and youthful vibe of his restaurant, asking, "It is difficult not to sound like Mrs. Cleaver saying so, but can you imagine what this young man could do if he straightened up his room?" Our question to you is this, and forgive us if we remind you of your father, the late Hon. Charles Proctor Sifton, rebuking counsel: Can you imagine what you could do if you ceased to conflate ambiance and cuisine into one awkwardly-yoked together category? Can you imagine, Sam Sifton, how much more useful and serious New York Times restaurant reviews would be—since they are already widely respected—if you took your starring more seriously?

Our beef with you is this, Sam Sifton: By expressing your valuation of a restaurant's environment and its cuisine in one atomic unit, you render that unit largely useless. We might also point out the dissonance between your deliverance of praise and your delivery of stars and that the relationship there seems vaguely correlated, but we won't. We also will not bring up the lack of continuity between your stars and the stars of Frank Bruni before you, for surely an analysis of the impenetrable currency exchange rate will only muddy the waters.

We ask simply only this: How does it make sense, Shmuel, that though you load the ledger full of positive descriptors for the food at Fatty Cue, it earns the same place in starry heaven (or purgatory) as for instance Le Relais De Venise, a gimmicky chain about which you griped, or Tanoreen, the Brooklyn outpost whose entrees you dismissed wholly? "Gristly lamb shank or one-acre lot of shepherd's pie," ring any bells, Siftso? Why not follow the example of Michael Bauer at The San Francisco Chronicle or those obscurantist Zagats and divide your ratings into categories? That way, if, for example, your reader is someone who truly loves food (and not so much taking swipes at the demographic taxonomy of your fellow diners, be they newly arrived on "stripped-down Schwinns in boat shoes and skinny jean" or " tight-faced matrons in vintage Halston, younger ones in diamonds and black pencil skirts.") he or she can venture to the outer boroughs or north of 14th to find it?

You might counter, Sam Sifton, that the New York Times-bestowed firmament is meant as mere suggestion, that stars are meant to illuminate the way, shed light to better expose the ground. You might argue that readers shouldn't be transfixed by the heavens but should keep their eyes on the earth. But surely you are familiar with the works of William Shakespeare from your time at Harvard—"tight faced matrons in vintage Halston, younger ones in diamonds" indeed—in whose Julius Caesar Cassius cautions: "The fault, dear Brutus, is not in our stars/ But in ourselves, that we are underlings." But knowing this, Sam Sifton, might you not lead more carefully and more precisely? Your stars, like Polaris, are for many time-short underlings true north. Chefs and restaurants live and die by your caprice, Sam Sifton. [Caprice may well live or die by your caprice, Sam Sifton.] You are a star maker, Sam Sifton, and heavy is the crown. At C.R.A.P.S. we take this responsibility seriously. May we suggest you do the same.