On Season 2 Episode 7 of Top Chef Masters: We learn who ran a restaurant for two weeks without working stoves, how not to cook octopus, and which chef busts out the racist joke. This week's contestants are Susan Feniger, Susur Lee, Tony Mantuano, Rick Moonen, Marcus Samuelsson and Jonathan Waxman. 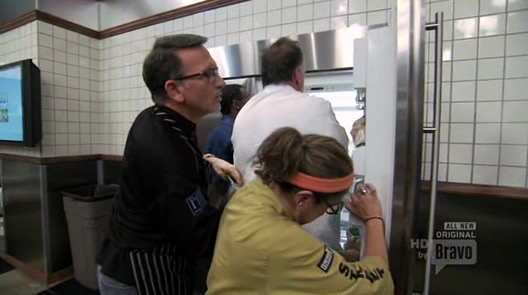 Kelly announces the challenge is to create a dish using leg proteins—crab legs, frog legs, leg of lamb, etc—and triggers a mad rush to the refrigerator to grab ingredients. Rick wonders no one's fighting him for the octopus and that 45 minutes isn't long enough "to cook octopus traditionally but I'm going to sear them in a really hot pan and then roast them in the oven." Or you could just massage it with salt to make it tender like the Japanese do, cause that works, but okay, dude! Good luck with that! 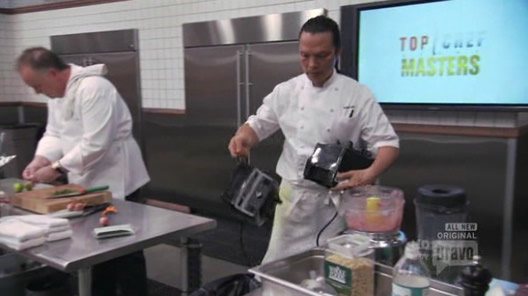 Meanwhile the show's editors give us a few clips demonstrating Susur's speed and mad chopping skills for us and then all of a sudden he breaks a blender; the sous chef I'm watching this episode with flips out as he tosses it into the trash, and says, "That Vita-Mix costs at least $400! That's more than most New York kitchens pay for a week's work! Six days of sixteen hours each!" If you're reading this sentence and still having fantasies about quitting your job and joining the restaurant industry, either there's something very wrong with you or you have a large trust fund. 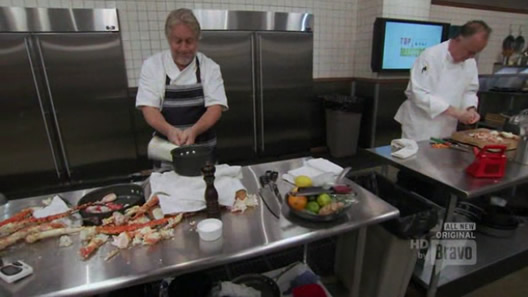 Jonathan bludgeons crab legs with a pot, managing to look the most menacing we've ever seen him—which is to say, not very. Both he and Tony are looking particularly haggard, which can't be good this early into the episode. It looks like they haven't even started to recover from last week's weird food Elimination. Susan is making chicken skin, one of her and my favorite things, and Susur busts out yet another one of my favorite things, a classic Susur story: "When I was sixteen, I quit school and I would hang out in the street. My brother said, "Okay, you know, cut that shit out. You're coming to work at the restaurant with me." And I looove the kitchen—the chef would be smoking, he's yelling, he's swearing. It's exactly what I want." 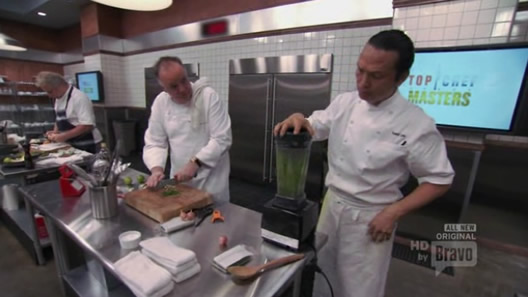 What Tony doesn't want is Susur all up in his business but he apparently can't have it. He says, "Once again, Susur is infringing on my table, plus he has two other tables." Why is Susur such a table hog? Or does he have a man crush on Tony? Either way, it's pretty weird and kind of rude. 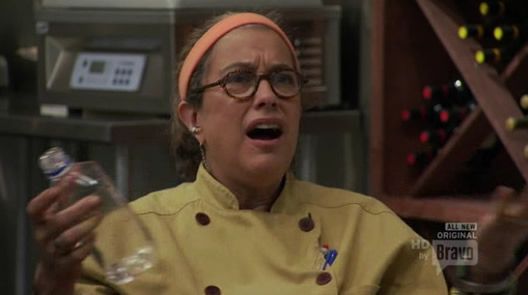 Susan gets called out for her sloppy plating, and deservedly so—she's been doing it all season long. I don't know why she's surprised by this! During last week's elimination challenge, her plate looked like a buffet threw up on it because everything was just thrown on it haphazardly; had she just, say, presented everything in tiny bowls on a plate like Indians or Koreans do, it would've looked beautiful and worked perfectly. You have to wonder if her blase approach to plating is going to do her in later on in the competition. 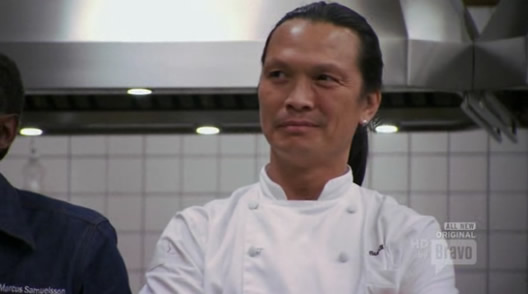 Rick's octopus legs are tough and described as "a workout." Susur's dish is called cute and he gets upset: "I don't like to hear the word "cute" describing my cooking because I'm serious, not cute!" 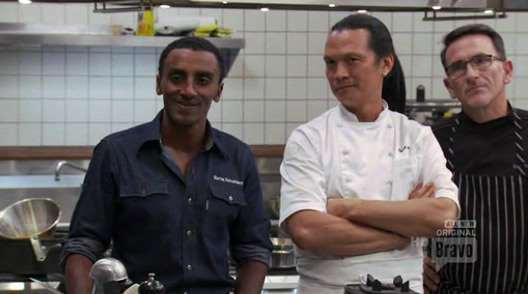 This week's elimination challenge is Season 4's tail gating party; they have to cook for one hundred USC football fans on a Weber grill. Susur has never heard of tail gating before—which makes me worried he's going to make a dish shaped like a Trojan like he made a creepy Marge face out of food for last week's Quickfire, and I hope he realizes it's Trojan as in Troy and not Trojans as in condoms. Jonathan is feeling pretty confident and says, "I've been grilling as a professional for over 35 years. I opened Jams up in 1984, my stoves didn't arrive. I went to the store, bought two Weber kettle grills and that's what I cooked on for two weeks."

In Whole Foods, Rick is pissed off because Marcus beat him to ordering chicken and wonders if Marcus figured out what he was planning and then decided to mess with him. Which sounds kind of paranoid but then again, given how cutthroat Marcus has shown himself to be this season, it's not exactly out of the realm of possibilities.

Susur tells Tony for the nth time, "You're my lucky charm." Tony: "Fuck!" Later on, while waiting for everyone else to finish shopping, Susur tells Tony he would be "perfect in a show for Sopranos chefs" and makes a joke about "having a cooler in the back" and the look on Tony's face could cut diamonds. He says later, "Susur annoys me at times. It's like, thank you for the stereotype." On the one hand, I know what Tony's talking about—it must really suck that the most prominent Italian Americans of the last ten years are gangsters from The Sopranos and douchebags from the Jersey Shore—but at the same time, professional kitchens can be pretty raunchy places and being compared to gangsters seems pretty mild on the scale of racist insults. And also, not that Asians aren't racist because they super are (just like everyone else!), but it's still very unusual to see a Chinese dude busting out a race joke on a white dude on television; usually it's the other way around in tv and movies, with whites and blacks being Real Americans and everyone else an immigrant with a thick accent who delivers food or runs the Kwik E Mart or does the drycleaning and gets no respect. So in that sense, while I feel for Tony and wish Susur hadn't gone there, it's amazing to see and liberating in its own way. 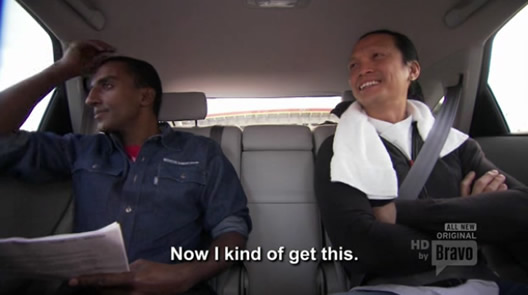 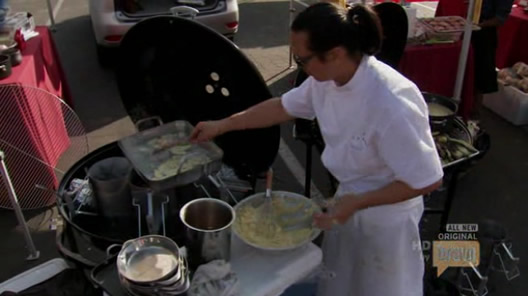 Moving on: Susur doesn't realize until they drive up to the parking lot that tail gating means you get fed BEFORE the game; he wants to make something different and so he's making dumplings. Um, WTF. Marcus, is also new to tail gating and is also making something WTF: a stew. For a tail gate party? In hot and sunny Los Angeles? I can see chili, maybe, but a stew is only slightly less ridiculous than dumplings. 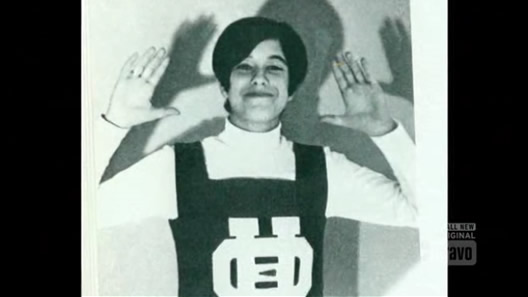 Rick's WTF moment is not understanding what Jonathan is up to. He says, "I'm not really sure why Jonathan is doing tacos. Why would I want to do a taco when I've got Susan Feniger as one of my competitors?" Meanwhile, he's making chicken and it's great to see him doing something slightly outside his comfort zone and not choosing seafood as he's done in every single challenge previous this season. 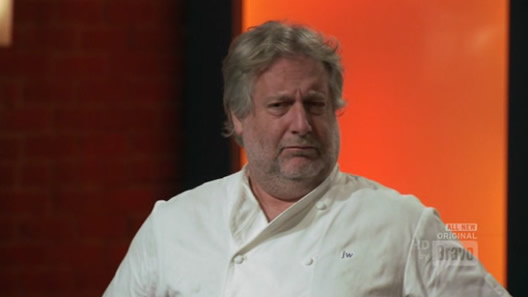 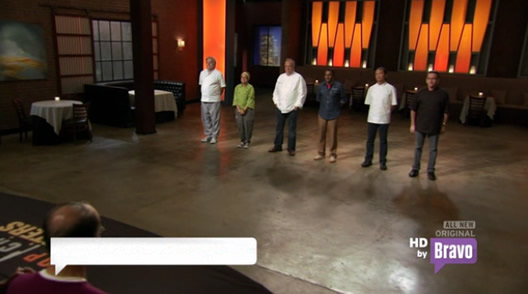 James Oseland says, of Susan's taco, "I don't know about you guys, I'm feeling more like a manly American by the minute." Jay nearly chokes on his food and says, "James, any plate of food that can do that to you is a miracle." (There's probably an amazing dirty joke in here somewhere about a lesbian's taco making a gay man feel manly, but I'm not going to even try.) Susur tries to defend his dumpling and Gael says, "Maybe a tail gate picnic is not a moment for high culture." 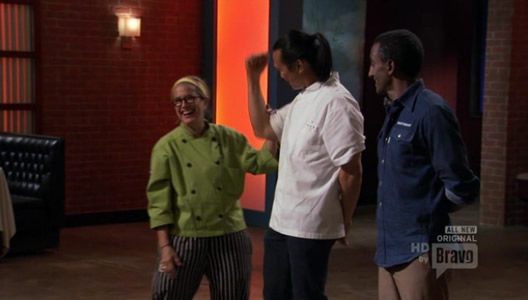 Tony Mantuano is OUT; Susan Feniger WINS. Susan swept the episode, winning Quickfire and Elimination, and has won the most money of anyone so far with $32,000 for her charity, the Scleroderma Research Foundation.