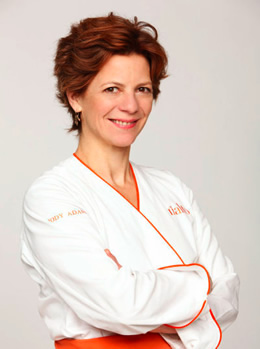 Jody Adams is the James Beard award-winning chef/owner of the celebrated Rialto restaurant in Cambridge, Massachusetts and a contestant on this season of Top Chef Masters. After winning last week's Elimination challenge, she was eliminated this week and is the second chef to go home from the Champion's Round.

Excluding Lisa Simpson, who's your favorite person to cook for?

My editor wants to know what the deal was with Susur Lee's super creepy Marge dish—why didn't anyone stop him? It looked SO creepy!

Yeeeaah. You know what, he was having a hard time figuring out how to interpret the challenge, and he's incredibly artistic, so that's what he did. But frankly, we were there to win—nobody was going to stop him from doing something that we thought wasn't, you know, going to be a winner. Why would we stop him? Go for it, Susur!

But the reality of it was, nobody had time to pay any attention to what anybody else was doing. We just put our heads down and made our own stuff. You know, I didn't even know—I didn't see his plate until I saw it on TV last night.

Would you say it was more or less attractive than last week's wedding cake? The "Charlie Brown Christmas Tree of wedding cakes?"

*laughs* Oh, come on! I think the wedding cake was? a challenge. The wedding cake was wildly crazy and, um, we laugh about it. I think in terms of control, and artistic control, Susur just beat us out. Our cake just took on a life of its own.

Moving on to the Elimination challenge, had you cooked with any of those ingredients before? Would you have picked something else had you had first choice?

I would've picked the chicken and the monkfish liver, had I had first choice. I've never worked with any of those [ingredients] before. So I chose things that I thought were most familiar to me, like a geoduck is a clam and I thought I knew what a clam was, and a goat is close to lamb, so I thought I knew what I was doing with that. So clearly I wasn't as familiar with those particular versions of those ingredients as I would've hoped—but the goat leg was just so old and actually frozen in the center.

You seemed to have done pretty well with the geoduck though, so would you ever cook with one again?

Yeah, I would. We were actually trying to get them, I wanted to put them on the menu, but we're a restaurant that serves local, seasonal ingredients and geoduck doesn't come from the East Coast, so I was talked out of it. *laughs* "C'mon Jody, razor clams, little necks, oysters, mussels; those are all okay." 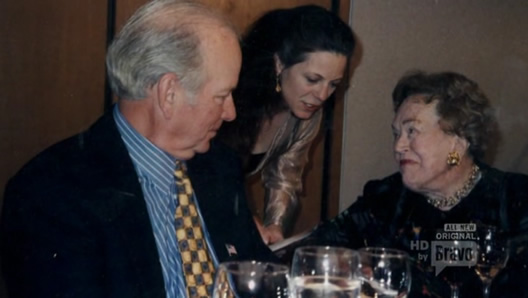 Everyone I know grew up watching Julia Child and American cuisine is obviously so heavily influenced by her cookbooks and her show, but unlike most other people, you actually got to spend time with her and cook with her. Do you have a particular favorite Julia Child story that you can share?

Well, we used to get together and have birthday parties for Julia Child at her house, and it would be potluck, and everybody would come. So chefs like Jasper White, Gordon Hammersley, Lydia Shire, Bill Poirier, Susan Regis; there are a bunch of us in the city who sort of grew up together and came out of that wave of the early 80s. Jasper always brought lobster and I think two years in a row, she tried to grind up the lobster shells in the disposal, and had to have the plumber come.

I remember this because it was two years! They were great parties, potluck and—you've seen pictures of her kitchen, with everything hanging on the wall, and she had this beautiful garden and big dining room, and we were all there cooking. It was really this incredible feeling of a community of people celebrating this amazing woman and food, yet very down to earth; nothing fancy, no egos. And then she put those lobster shells in the disposal and, "Julia! You can't do that"

I know you're not really a big reality TV watcher but now that you've been on Top Chef Masters, would you recommend the Top Chef experience to a less established chef? Like your sous or other younger chefs you might meet that are starting out?

I think it's the kind of challenge that teaches you about yourself in ways that you can't imagine and it was an amazingly positive experience for me in all kinds of ways. I think I would recommend it to anybody—I mean, I have friends who have been chefs for thirty years, "Oh no, I couldn't possibly, I would NEVER do that. I'd be terrible at that. I would never. Food isn't about competition, bla bla bla bla bla." Which are all the things that I said. And I know that they could do it. And I know it would be good for them.

But there's this knot of fear, of exposing yourself and failing, and nobody wants to do that. So fortunately I've come through this now and Bravo could've spun that differently, made me look like a very different person than I was at the end, but nobody wants to destroy anybody.

I've been told, these shows can make or break your career! But Bravo's not out to do that, they don't want to make or break anyone's career, they just want to make good television and have fun. So I think for anybody, it's a great thing to do, and I think that particularly if there's an organization that you would like the world to know about, what better way to do it than the power of TV? And that's what I was able to do with Partners in Health; I know that their donations on Wednesdays spiked dramatically as a result of me being on Top Chef Masters. So I would say for young cooks, and even old chefs: get out there, get on TV. If you can get your shifts covered or can get your restaurant covered; if you're a chef, go for it.