On Season 2 Episode 6 of Top Chef Masters, we learn which chefs are used to eating weird things and which ones are not, and how "geoduck" is pronounced. This week's contestants are Jody Adams, Susan Feniger, Susur Lee, Tony Mantuano, Rick Moonen, Marcus Samuelsson, and Jonathan Waxman. 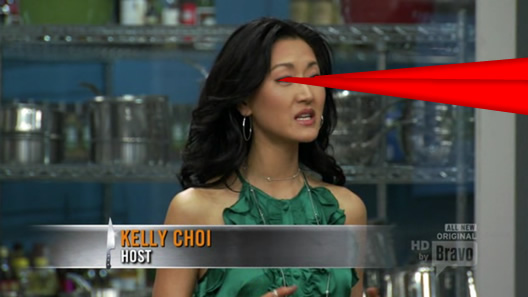 This week's Quickfire is to create a dish for various characters on The Simpsons to please show creator Matt Groening, producer/writer Matt Selman, and actor Hank Azaria, who does many of the voices of the most popular characters on the show. Susan's making donuts as part of her dish for Moe, which gives me pause—her previous attempt at pastry, in last episode's elimination challenge, was so horrible Rick called it the "Charlie Brown Christmas tree of wedding cakes." Susur doesn't even know how to say "Marge" and has clearly never watched The Simpsons! Yet somehow he manages to figure out what Marge looks like, and I fear the image of his dish may appear in my nightmares. As Groening says, "This is like eating Marge's face!" 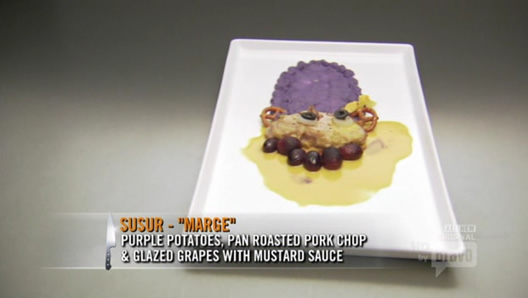 Marcus is excited to make straight-up Indian food because Apu is an immigrant like himself, but as Groening points out, while "it feels very authentic, (?) Apu is often trying to disguise his origins." Tony's dish suffers from the lack of bacon flavor it promised, primarily because the pan of bacon fat he'd set aside to flavor it was mistaken for garbage by Susur. Oops! 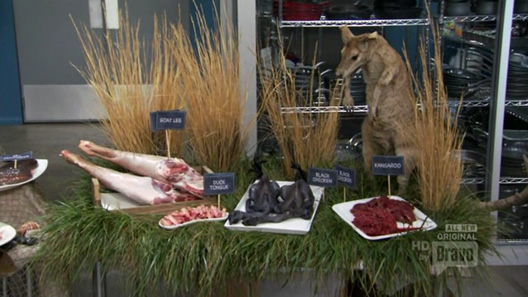 If you thought the chefs were unhappy for Wedding Wars, this week's challenge is an even more unpleasant surprise; it's the Exotic Surf and Turf challenge from Season 3, to feed very picky diners: Andrew Zimmern, Bill Esparza (food blogger, Street Gourmet LA), Marc Moss (co-founder, Weird Food Festival), and Eddie Lin (author of "Extreme Cuisine" and the Deep End Dining blog). The ingredients are wheeled out—black chicken, duck tongue, geoduck, giant squid, goat, monkfish liver, kangaroo, sea cucumber—and the kitchen is filled with very grim faces. Even the previously indefatigably cheery Susan looks completely deflated as she gets her proteins; later on, she tells the checkout girl at Whole Foods, "If you knew what I was cooking, you'd be puking." 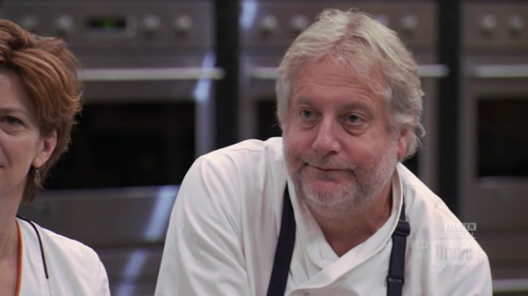 Rick got to choose first as his Quickfire prize, but he's still nervous—about Susur. He says, "Susur chose the same ingredients as me—both black chicken and the monkfish liver are Asian-style products and? he's from China, you know. I'm up against a big big big challenge here and I have to perform." And Susur thinks he's right to be nervous: "I'm not worried about this challenge. You're talking to a Chinese person! I grew up with all these things around me." Though Rick isn't SO nervous that he can't stop and get a massage while they're at Whole Foods: 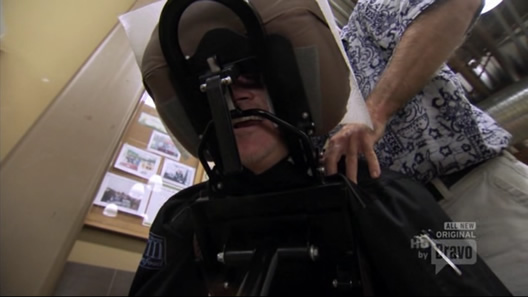 And once again, in his munificence Susur blesses us with another classic story: "When I was back in Hong Kong, my sister took me to a fire pot where you cook for yourself and then she put something to be boiling in the pot. "Oh, you should have that!" I bit into it and it burst out into tiny tiny tiny tiny little eggs. I said, "What the hell was that?" Oh, it was, uh, chicken testicle? It was really good, actually." Dear Bravo: if you know what's good for you, when this season comes out on DVD there'll be an entire section of all the Lee family anecdotes, including those that didn't make it to air. I could watch an entire clips show of Susur's stories, they're just so good.

Jody is seemingly non-plussed, even though she's never so much as seen a geoduck up close before. She says, "I figure, it's a clam, I'm from New England, I know clams. So I feel confident about the challenge." Marcus is also trying to be smooth, and says, "Growing up in Ethiopia and Sweden, I'm no stranger for me eating weird food: cockroaches, veal brain, fish eye. It's only strange when it's the first time."

Meanwhile, Susan is back to her usual self. She's never having a cooked a slug before and felt it was like "shooting in the dark" and now says, "When I got this yesterday I was like, going to kill myself, but now it's sort of interesting." Jonathan, who describes himself as the "grilled chicken and french fry guy" and is generally incredibly zen, is freaking the FUCK out. He says, ""I can make anything taste good. I can make dog shit taste good. But I want to love what I'm going to cook, and I'm not loving this." 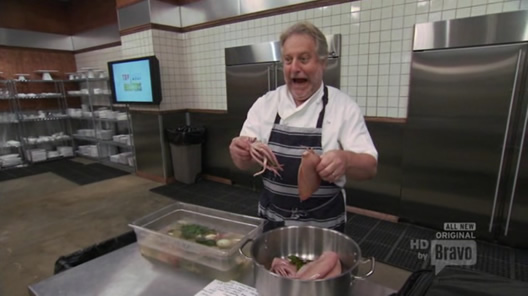 I suspected a teachable moment was coming and sure enough, we get one thanks to Andrew Zimmern, who says, "We've lost connection in our country with eating out of necessity. What's weird to us is common cuisine and traditional grandmother food in another country." 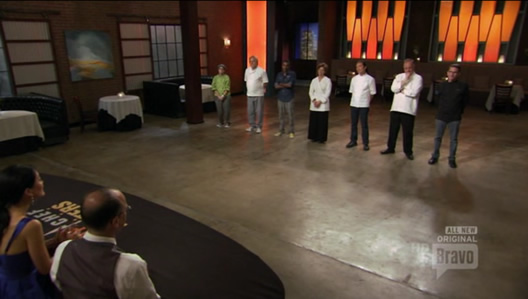 It all sounds kind of good but most of the dishes look like a hot mess, with the exception of Rick's and Susur's plates. Jonathan's get called out as looking like it's from a buffet, Jody's goat isn't cooked enough, Marcus's had too much going on. And Gael Greene wants us all to know she's saving Susur's black foot to scratch James's back later. *shudder*

James Oseland says, "I think Tony, Susur and Rick really embraced these exotic ingredients." To which Gael says, "Those chefs you named also had the first choice of ingredients, and if you pick monkfish liver which is divine, you have some chance of doing something sophisticated in the way that Rick's dish was."

Susan, Tony, Susur and Rick are called in; they're all safe, but it's a battle between Rick and Susur.

The bottom three are Jonathan, Marcus and Jody; Marcus and Jonathan have been particularly nervous all challenge long about being sent home.

Jody Adams is eliminated. Susur Lee wins with the second highest Elimination score ever on Top Chef Masters and has the high score of 19 1/2, and is clearly the man to beat.