The Hollywood memorabilia auctioneer Profiles in History posted a scant hundred props from the television series Lost on its website that'll soon be put up for auction. Some of the items aren't super-interesting (like custom-made passports, boarding passes, and business cards, except for maybe the truly nerdy).

But some of the items fall under that category of "things we'd like to own if we had a recently-renovated museum wing attached to our mansion," things that will likely sell for many thousands of dollars: DHARMA Initiative-branded beer and foodstuffs! Apollo candy bars! And Fish Biscuits!

Collection of 32 DHARMA Beer Cans in Varied Condition "A large collection of DHARMA Initiative beer in varied condition--some are opened, while others are empty and some are crushed, while some are in almost perfect condition." 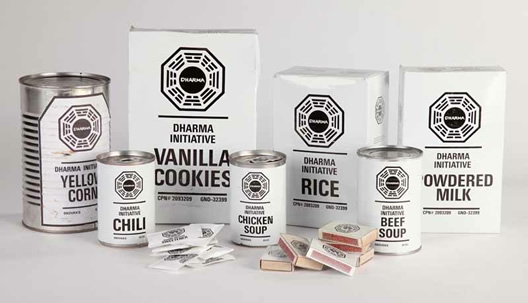 Collection of DHARMA Food: "Includes box of rice, powdered milk, vanilla cookies, cans of chili, chicken soup, beef soup, packages of sweetener and matchbooks." Yes, you could just download and print your own labels and affix them to some cans, but that would lack the authenticity factor.

Apollo Candy Bar, a fake brand of chocolate candy bars created specifically for Lost that made numerous appearances during the show. 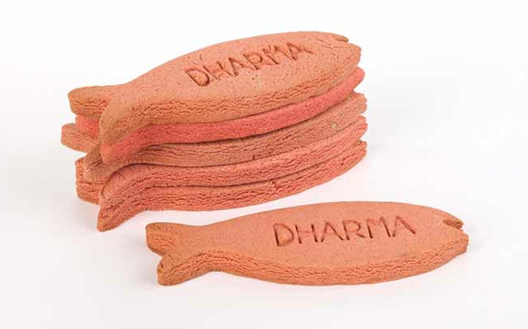 Set of Approximately 30 DHARMA Fish Biscuits: "Set of approximately 30 DHARMA-branded fish biscuits, measuring 8 to 10 inches in length. Seen during Sawyer's captivity in the Hydra cage." You can certainly make your own, but you'll never know if you got the flavor profile just right.

All evidence as to the producers' and set designers' ridiculously obsessive attention to detail! And then there are other things including Juliet's DHARMA Rum Bottle and a Mr. Cluck's Prop Head, and surely much, much more is to follow. No reserve prices set. We're guessing $$$$$?

[All Photos: Profiles in History]