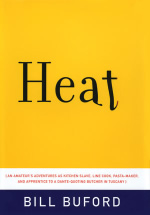 Author and journalist Bill Buford's 2006 book Heat: An Amateur's Adventures as Kitchen Slave, Line Cook, Pasta-Maker, and Apprentice to a Dante-Quoting Butcher in Tuscany, a source tells us, has recently been optioned to become a movie. [Source reported as if common knowledge but I haven't seen anything written about this so... scoop?]

Casting has not yet been determined, nor has a release date been announced. What we do know is that Mario Batali, who Mr. Buford profiles slavishly and praises lavishly in the book, is gunning to be played by film and stage actor Philip Seymour Hoffman, but (as always!) we have our own ideas.

From left to right, in order of attractiveness.

On the left, is Stephen Tobolowsky aka Ned Ryerson. In the middle is Mr. Buford himself. On the right, yes, a stretch but some similarity there: Javier Bardem.

Not very nice to say but... Bruce Villanch. The not unhandsome Cecchini in the center. And, if only for the eyebrows, Mr. Jack Nicholson.