McDonald’s Germany has just introduced cupcakes inspired by four different neighborhoods in New York City. Each ad features a Manhattanite from each 'hood explaining why the cupcake is characteristic of where they live: There's a hipster from the East Village, a savvy shopaholic from SoHo, an earthy Central Park gal, and a clean cut young professional from Chelsea. The questions is: which German McDonald's cupcake are you?

All copy translated via Google Translate: 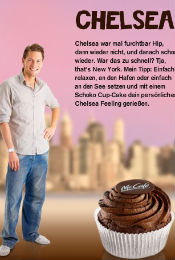 Chelsea Cupcake: "Chelsea was once terribly hip, sometimes not, and then again. Was that too fast? Well, that's New York. My tip: just relax on the harbor or simply sit by the lake and a chocolate cup-cake with your personal feeling happy period Chelsea." 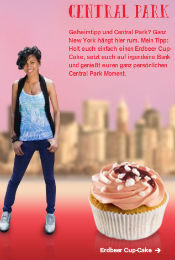 Central Park Cupcake: "Tip and central park? Throughout New York hangs out here. My tip: Just get yourself a cup strawberry-cake, sit down at any bank and enjoy your very personal Central Park Moment." 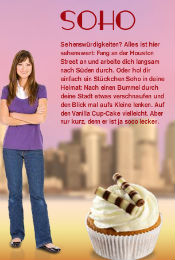 SoHo Cupcake: "Sightseeing? Everything here is worth seeing: catch at the Houston Street, and work your way slowly through the south. Or get just a bit of Soho in your home country: After a spree breath through your town a bit and draw the view once again small. At Vanilla cup-cake, perhaps. But only briefly, because he is sooo yummy." 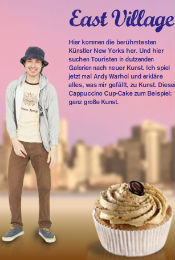 East Village Cupcake: "Here come from the most famous artists in New York. And here in dozens of tourists looking for new art galleries. I now play Andy Warhol once and tell everything what I like to art. This cappuccino cup cake = for example: all great art."