Share All sharing options for: Jody Adams on Her Top Chef Masters Experience 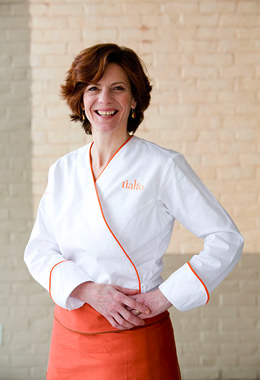 Jody Adams is the James Beard award-winning chef/owner of the celebrated Rialto restaurant in Cambridge, Massachusetts. As a contestant in the latest episode of Top Chef Masters, in a stellar coup, she won the Quickfire Challenge and advanced straight to the Champion's Round (see our full recap). She kindly took the time to answer a few questions:

I think the stakes are higher for Top Chef Masters than for regular Top Chef, because it's easier to make or ruin a reputation than it is to just keep the one you already have, and everyone on Masters is already established. What made you decide to do the show?

My children, Oliver and Roxanne, and my staff were hounding me but I was waffling. Then Oliver said "Mom, if you wimp out now, it will be really obvious." I've been cooking away for over 25 years. I needed to be pushed out of my comfort zone, to do something scary. Hey, I know I'm a great cook and Rialto is known as a stellar restaurant, but a reputation as a wimp, that was something to be concerned about.  So I had to say yes.

I did Top Chef Masters in order to introduce the Bravo audience to me, to my cuisine and to Rialto. But I really hope my appearance garners some extra attention for Partners In Health, the charity I'm cooking for. No doubt the national TV exposure will be fantastic for all of us. TV is powerful.

Your son told you not to take too many risks and yet you took one of the biggest risks one can take on the show and made pastry for the Quickfire — pastry's been the downfall of many a chef on Top Chef! So why'd you risk it?

I love fruit tarts, crostadas and pies and when I have to make a dessert, I always start with a pie crust so I didn't feel it was a risk. However, as I was anxiously watching the show last night, I thought to myself, "What were you thinking?" But I pulled it off!

Cooking is generally undervalued and dismissed as women's work — except in restaurant kitchens, which tend to be macho and very heavily male-dominated. It's still pretty rare for women to be marquee chefs or win Beard Awards and yet three of you have made it into the Champion's Round this season. What's it like to have your peer group comparatively well-represented for a change?

Awesome. We belong there. Diversity makes for better food and a better show.

You would've made it through to the Champion's Round by coming second to Susur Lee's history-making Elimination win, if you hadn't already won immunity after Quickfire. Which result was more satisfying for you, given that you didn't really have anything to prove anymore during Elimination?

I was there to win so I was just as competitive going into the Elimination challenge as I would have been if I didn't have immunity. It would have felt like cheating to me if I hadn't placed first or second so I absolutely had something to prove and I proved it.

The Quick Fire was the first challenge I did and I didn't know what I was up against going into it so I was thrilled to win. It was incredibly satisfying because I raised $5,000 for Partners In Health.

As someone who started cooking early and didn't attend culinary school, what advice do you have for people who are considering entering the industry? Do you think culinary school's ever worth the money?

Generally speaking, read as much as you can, travel, taste everything and cook. If you're still in high school and thinking about cooking as a career, do anything to get into a good kitchen for a year or two after you graduate. Resist the temptation to sign up for cooking school. Give yourself a chance to get up close and personal with the life and see if this is what you really want, if you've got the drive and stamina for it. If you're older, thinking about changing from your current field into cooking, consider a short, intensive program to get some skills to help you get in the door.

I've got a pair of cooks right now who switched out of completely different occupations — and one-year cooking programs made it possible for them to make the jump. That said, the hype that surrounds some programs disturbs me because it raises unrealistic expectations in kids. They're selling celebrity, not cooking. Cooking is always hard, mostly underpaid, and not at all glamorous, at least in the beginning. If it's for you, dive in, but never forget it's a business and at the end of the day, be sure you're making money.

Finally, what's the deal with Susur Lee not wearing shoes when he cooks? Is he really a kitchen ninja?

He wore the wrong shoes that round. We were all racing and they kept falling off so they were left in the pantry.

If my life depended on knife work, I would hook my wagon to Susur's. He is amazing.