Share All sharing options for: Michael Ruhlman on Fundamentals, His New Books, Starbucks 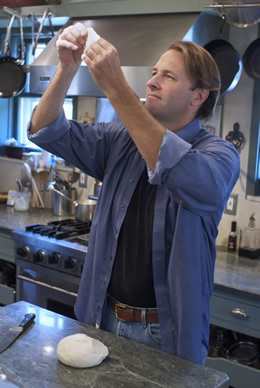 Michael Ruhlman, author (The Making of a Chef, Ratio) and cookbook collaborator (Thomas Keller, Eric Ripert), was a big hit at the International Association of Culinary Professionals convention in Portland, Oregon, especially when he said "I think that's bullshit" to The Flavor Bible co-author Karen Page's comment that the average person is too busy to cook.

Ruhlman also surprised his Portland Twitter fans by staying faithful to his favorite brand of corporate caffeine (Starbucks) — this in a city with so many little roasters that the coffee cognoscenti now view Stumptown as "the man."

I've always thought it was a bit like learning high school grammar: know the rules, and then when you're an actual writer, break them
I think that's a perfectly apt comparison, yeah. Know the rules that have been discovered over the course of human cooking. Once you know those, and understand those, you can do whatever you want. Then you can go crazy. Without the basics, you can't go anywhere. You never get off the ground. Grant Achatz at Alinea, what he's doing now is way, way out there, and he's an extraordinary technical cook. Extraordinary at the basics. He learned the fundamentals and perfected them. Only once he did that — only because he did that — can he do this really crazy food. Everything's grounded in fundamentals.

Between your last book, Ratio, and your presence on the web, you seem more interested in the day to day of cooking, rather than the long-form storytelling you began with.
I'm just following what interests me. Maybe the books I'm writing now will be the last books that I write. I don't know.

So you are working on a new book?
I'm writing two right now. One is on techniques, it's called The 20 Techniques: basically 20 things you need to know to cook all the rest. And then there's a follow-up to Charcuterie called Salumi — so that's for more advanced dry-curing stuff.

When you put on the whites with other chefs, do you feel like you're their equal or do you still feel like "the writer"?
I still feel a little like an interloper, yeah. I mean, I know what I'm doing, and I can handle myself. The great thing is there's always more to learn. As soon as you stop being a student in the kitchen, you're finished cooking.

If you did a new The Soul of a Chef, who would you be covering today?
I'd have to go back and find some young cooks. I wouldn't want to write about anyone older than I am now. I'd want to understand the people who are cooking now, the 25-year-old who's out of culinary school and has been cooking for a couple of years. That's who I'd want to follow.

People here are giving you a lot of flak for liking Starbucks....
Controversy is fun! Basically, I'm a philistine when it comes to beverages. I like strong harsh stuff, really. Starbucks. Everclear.

One last question: are you Ruth Bourdain?
I am not. If you find out who it is, let me know.