On Season 2 Episode 4 of Top Chef Masters, we learn that a kitchen with more women in it really is a kinder, gentler place, which chef cooks without shoes on, and that the judges are not always as dedicated to simplicity as they say they are. This week's contestants are Jody Adams, Debbie Gold, Maria Hines, Susur Lee and Rick Tramonto, all new to Top Chef Masters. 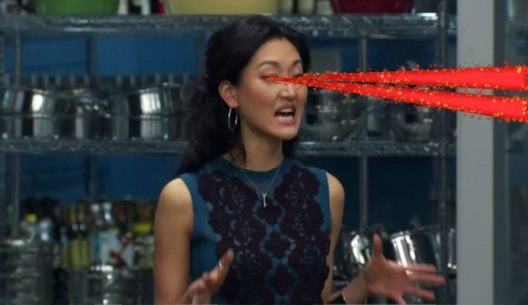 This episode's Quickfire, taken from Season 1, is to make a fruit plate, which sounds stupid because, hey, it's just fruit, right? But as a challenge it's actually very challenging because your dish has to be beautiful and there's basically no way to hide shoddy, half-assed knife work when you're dealing with fruit; it's a great test of a chef's presentation and knife skills. So Susur is, of course, extremely confident—he has the best knife skills of all the chefs in this group, maybe of all the chefs on this season. And hey, the other chefs think he's the one to beat. As Rick says, "There are some chefs for me that are like the astronauts of our industry. Susur Lee is one of those astronauts."

Jody's dish is a fig & walnut tart with pomegranate syrup and zabaglione. Her son told her not to take huge risks and here she is making a pastry—which is basically THE riskiest thing to do because pastry is so easy to screw up and very nearly impossible to salvage, especially when you're under time pressure. Sure enough, something does go wrong; when Jody puts her dough in the blast freezer to chill it and instead manages to freeze it solid, it comes out of the oven not cooked all the way through.

Just as people just cannot shut up about Marcus Samuelsson's crazy back-story, Susur can't stop talking about his own East-Meets-West history and how it informs his cooking and food. It gets to the point where I honestly have to wonder why he's exoticizing himself—he's obviously a very talented chef, successful in his industry and respected by his peers, but when does talking about your background cross the line from just smart branding into, well, actively Othering yourself? We don't really Other chefs from Europe from American chefs, so why should we Other Asian chefs? Isn't that, well, racist? And hey, is he really that much of an Other? Susur's not the only chef to use French culinary technique with his native cuisine in either Hong Kong, where he was born, or Toronto and New York, where his restaurants are. 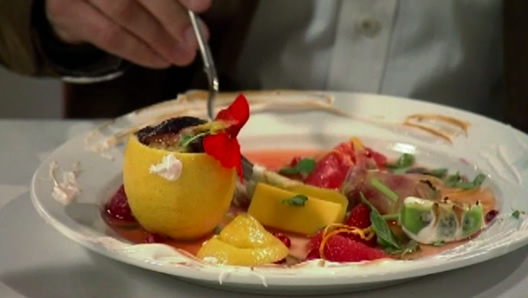 Susur's dish is a fruit plate with blackberry "ravioli" and thai basil. It looks a total mess; Gail and Joel have no idea what to make of it and Susur is PISSED. 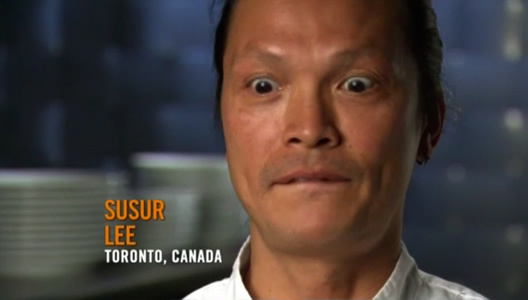 Rick's dish comes out: herb and fruit shooters, which sounds like some kind of sex act or maybe a bad name for a band. He says, "I wanted to put my own spin on it, which is using a Versace cup, my little culinary inspirational card." Are you kidding me with this shit? 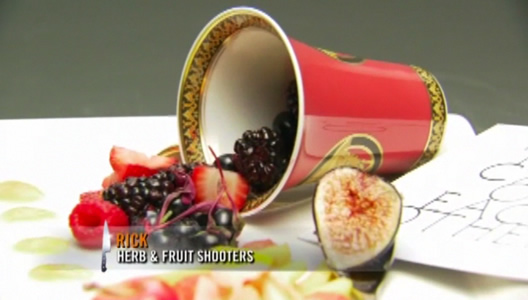 The Versace cup is tacky as all hell, because it's Versace, and the cards are so trite and corny that they make me want to barf. It's something I'd expect from a sorority pledge dinner, not from a Top Chef Master. But what do I know? Joel and Gail seem to think it's playful! Again: BARF.

The challenge: take a classic family dish and put a modern twist on it, to serve to the cast & crew of Modern Family. Susur's still not over how badly he did during the Quickfire: "I got the lowest score. This show is called Top Chef MASTERS! Coming from an Asian background, that word "master" is very important to me. So I called my wife, feeling sorry for myself, bla bla bla. She says, "Shut the hell up! I don't want to listen to that bullshit! Go out there and fight!" Jody's not fond of the catering aspect of the challenge because it's "like interrupted sex. We cook for an hour and a half, and then we have to stop. You know, by that time, how can you climax?"

This is the first Top Chef Anything I've ever seen where the women outnumbered the men and as much as I hate to traffic in gender stereotypes, I think you can see the difference in the kitchen, which is generally such a macho, aggressive place. Usually there are always at least one or two guys engaged in a my-dick's-bigger ego contest and this episode everyone seems to get along just peachy—except for when Susur goes over to eat Maria's food after service, pronounces it "really nice" and then goes on to say, "When you're hungry, everything tastes good." Ouch! He's now in the running for this season's King of Passive Aggressiveness, alongside Marcus Samuelsson. 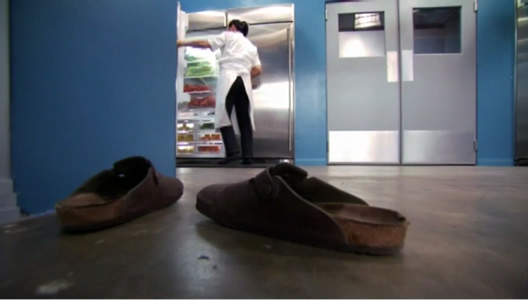 And okay, I know this is turning into Su-Su-Sussurdio, but now we discover that other chefs think Susur is a total weirdo because... he doesn't wear shoes in the kitchen! He says, "Being a chef is like a ninja. You have to be so fast and so quick. You have to be free. I feel like I'm the kung fu master." 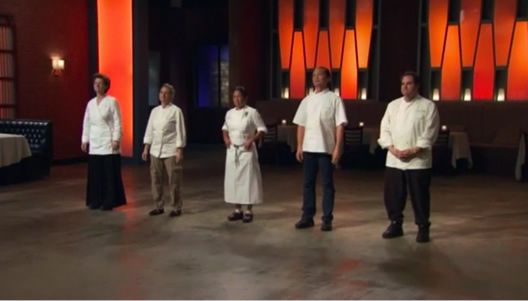 The judges are Gail Simmons, Gael Greene and Jay Rayner. They too seem to be kinder and gentler this episode—not even a single half-hearted attempt at a cutting bon mot from Jay or Gael. Did Rick even get dinged for buying instead of making his sausage?