Share All sharing options for: An Open Letter to GQ's Alan Richman

Eater intercepted a message sent to GQ food guy Alan Richman by the Brussels-based international restaurant critic organization C.R.A.P.S. They were unhappy with Richman. Here it is, in full: 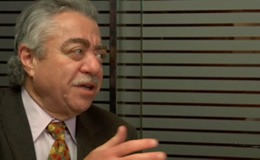 We at the Conseil Restaurant Association Professional Société [C.R.A.P.S.] can not express adequately the concern we felt upon reading an excerpt of an interview you gave to Mediabistro on the party organ Eater.com. In that interview, you were asked your thoughts on citizen journalism. To wit:

Do you think that citizen criticism has the potential to make full-time critics obsolete?

To which you replied:

I think it's of course disastrous. It's like asking your neighbor whether or not you need penicillin for a cold.

Surely your argument here is that citizen criticism is misguided since opinions are the domain of trained food professionals. On this point, C.R.A.P.S. members in good standing Sam Sifton and Frank Bruni of the New York Times raised a howl of complaint. Be advised, Mr. Richman, former sports writer, these men are indeed professionals but not trained in the ways of food at all. Mr. Sifton comes from a culture beat; Mr. Bruni from the Rome bureau.

You yourself, Mr. Richman, wrote about sports but are no athlete, write about food but are no chef. You are not only dismissing the riffraff citizenry—a move we wholeheartedly approve—but disqualifying a fairly large slice of your fellow C.R.A.P.S. members.

There is also a faction here at C.R.A.P.S. HQ which views your argument thusly: Citizen criticism is not only disastrous, but pointless. For why would one defer to the opinion of so unexpert an expert when the question is so obvious. In your hypothetical, penicillin; in our world, whether food or a restaurant is any good. [This faction, by the way, is split 50/50 on whether to take penicillin for a cold but the better reasoned among them think not, since penicillin is an antibiotic and a cold is a virus.]

But lo, Mr. Richman, beware! For this too, is perilous for our profession. Imagine a world where readers ascertain for themselves their opinions, instead of deferring to ours. Imagine for a moment, Mr. Richman, a world in which citizens could, from the plenitude of voices, make up their own minds as to which voices deserved purchase, without relying on the imprimatur of authority begat by the organs associated with such names. You, Sir, have just imagined a world in which you and we are redundant.

In the future, Richman, keep your comments to the written page, for the internet and the world it ushers in shall not be kind to you nor look kindly on your profession. By stooping to answer its questions, you have shed unwelcome light on our cabal and undermined the very foundations of this organization.