On Season 2 Episode 3 of Top Chef Masters, we learn that a kitchen full of dudes can get really aggressive, which chef the others call Obi Wan Kenobi and that you can seriously misjudge your audience if you don't watch reality TV. This week's contestants, all returning unsuccessfully from last season, are Graham Elliott Bowles, Wylie Dufresne, Ludo Lefebre, Rick Moonen, Mark Peel and Jonathan Waxman. They all have something to prove, but two of them have extra angst: last year Rick didn't get food on a plate during the Quickfire and Wylie didn't get chicken onto Jay's plate PLUS he lost to Graham. Ludo is subtitled and immediately launches into what will become his familiar strain of complaint and profanity: "People called me "Pepe le Pew" after the first show. What the fuck?" 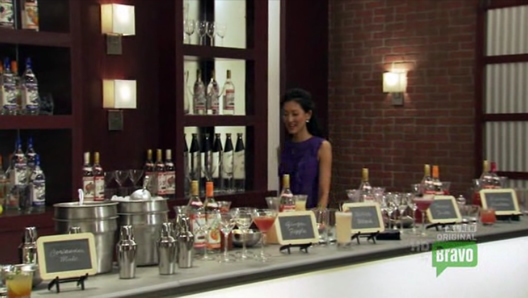 The chefs walk in to see a table laden with booze, a challenge taken from Top Chef Season 3. Kelly tells them they have to create a dish to pair with a Stolichnaya cocktail and in walks Charlotte Voisey, master mixologist. She's wearing a top in almost the same purple as Kelly, which to me proves that either this season's wardrobe stylist just doesn't care or the director doesn't, because pretty much any other show would've put Charlotte in a different top. Why does no one care about fashion? People: this is still a show on Bravo, and therefore watched primarily by ladies and gays. Please care about fashion! 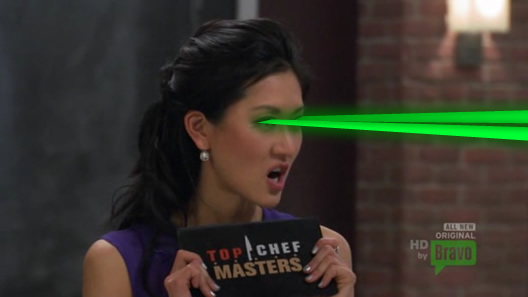 They're given a big taste of every cocktail—and there are seven of them, which, if this was regular Top Chef, I would suspect was a total ploy by the producers to get all the contestants drunk and cranky for drama or accidents in the kitchen at 8 a.m. Reality competition shows like Top Chef and Project Runway keep apartment fridges and waiting rooms well-stocked hoping people without access to the outside world will eventually get bored enough to be stupid enough to get drunk on camera, which of course always happens. They pick cocktails and then we're told the judges will be the Real Housewives of Orange County AND Gael Greene, all of whom presumably know a lot about getting super crunked and doing dumb things, though of course Gael at least has never done any of it on camera and saved the revelations for her autobiography. I am part hoping Housewife Vicki Gunvalson isn't on because her trademark "WOOHOO!" makes me stabby, and part hoping she is because maybe she and Gael will get in a catfight, but then I realize that Gael might fall and shatter like at the end of Death Becomes Her and then how would she eat?

Rick, who is a seafood guy, picked the Forest Fruits cocktail, which is basically a sweet, alcoholic smoothie. He says, "Every time i took a sip, all I kept thinking was "strawberry shortcake" and I know that's a bad idea and I'm thinking "I'm not a pastry chef." That is BALLS. Pastry is undervalued in kitchens—in no small part to the fact that most pastry chefs are women, kitchens are male, and things considered "women's work" are always historically undervalued—but is incredibly hard to do right. Not everyone can bake, and he's baking from scratch! 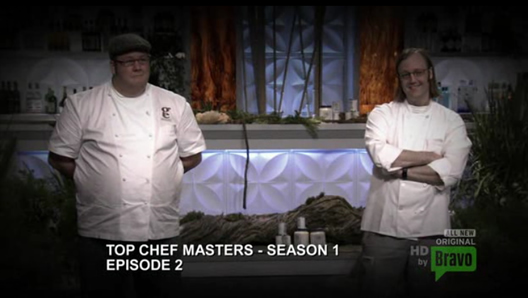 Now Wylie is talking smack: "Last season, Elliott and I were in the same group together and I lost to him. I've never a big fan of, like, talking ill about others but I'm going to kick Elliott's ass." And now I'm confused because Kelly keeps calling him Graham. Pick a name and stick with it, guy! Jonathan says, "I look around the room to see what the other guys are doing, I go, "Oh my god, they're just trying to make it too hard on themselves. Housewives of Orange County do not want to sit and eat a big plate of food, they want little tidbits. That's what I did." He finishes twenty minutes ahead of everyone and Ludo calls him the master. Rick admits, "The one that I want to beat the most is Ludo. [Pepe le Pew voice] My leetle French nemesis, yeah. But I don' like theese, you know.[/voice] He's just bitching and moaning, complaining. Get over it!"

The Housewives are here! No crazy Vicki but we do have Lynne Curtin, Tamra Barney and Alexis Bellino. If you don't know watch their show, here's all you need to know about them: the Housewives generally don't consider Lynne the sharpest crayon in the box, Tamra is a capital-DQ-Drama-Queen, and Alexis is conservative and goes to church every Sunday. Kelly asks, "Do you usually drink cocktails and have food at the same time?" Lynne says, "Well, when I'm with THESE girls..." and Gael looks SO EXCITED, like she feels like she might be making three really awesome new friends. Clearly she has never seen their show or she would know better! 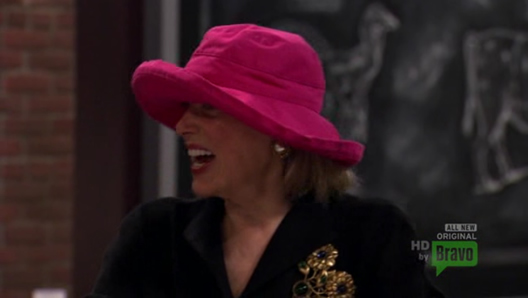 And so this strange combination of characters gives us what is maybe my favorite Top Chef Masters moment of the season, which must have had the producers clapping with glee:

[kitchen]
Ludo: "Good job, buddy!"
Wylie, presciently: "I don't know, let's see what the one in the hat says."

[dining room]
Gael: "I don't know. There's something about eating a sweet malt cider-like drink with FISH."
Tamra: "I agree."

[kitchen]
Wylie: "Wait a minute. WAIT A MINUTE! You can't change your mind!"

[dining room]
All the housewives look like sad pandas.

But ah, every chef had a precious moment!

Alexis: "Pork isn't really something I eat much of. Not my favorite."
Jonathan: "You know what we say in new york? OY VEY." 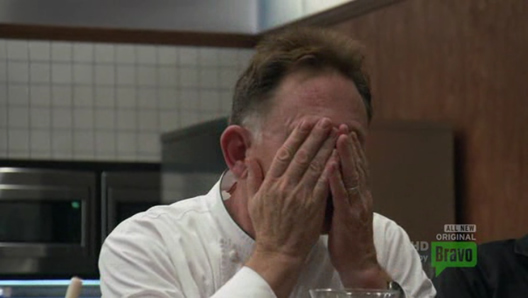 Lynne: "The dessert is fabulous. This is frozen yogurt, riiight? This is on my Weight Watchers!"
Gael: "I don't know." 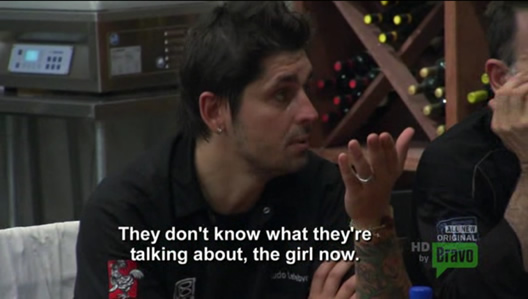 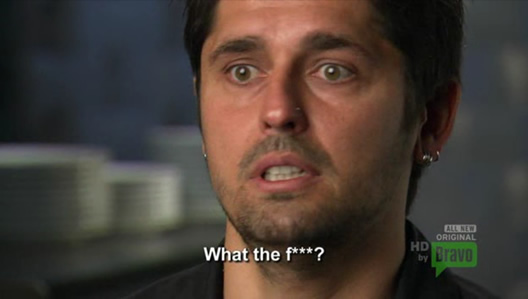 All the chefs look utterly defeated. But the joke's on them! The Housewives both have AND grade on artificially high curves and so everyone's scored 4 stars except for Jonathan, who's scored a perfect 5 and has just won $5,000 for Meals on Wheels.

The chefs are told they have to create upscale versions of traditional pub food, to be served at Tom Bergen's Tavern. Jonathan's advantage from winning Quickfire is he gets first choice; he chooses shepherd's pie and the others have to agree amongst themselves. Rick and Ludo argue over fish & chips until Rick ends up taking it and Ludo is stuck with Irish stew. Wylie has a game plan: "Bangers & mash is a pork sausage served with mashed potatoes. I don't want to make a traditional dish but my approach this season is to pay attention to who I'm cooking for and trying to make sure that they can wrap their head around it." No molecular gastronomy! 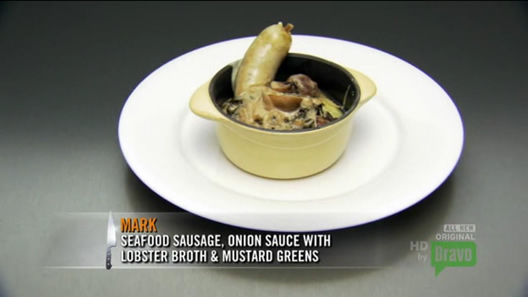 Mark is doing a seafood sausage for his Toad in the Hole and Rick is all gangsta territorial, why are you up in my crib?, which is rather off-putting—just because you specialize in fish, no one else can do it? Would it have been okay if Eric Ripert was in this group?

Jonathan is sticking to his guns: "I won the Quickfire with very simple food. So you know, the strategy remains the same. I'm not gonna try to razzle dazzle anybody. I can't do it. It's just not in my lexicon." I would love, LOVE to see Jonathan trying to razzle dazzle somebody as I get the feeling it would involve a Liberace suit. Polyester! Sequins! Tassles! Glitter! Mark opens the oven with ten minutes to go and it's COLD. He turns it up to 475, but he knows his Yorkshire Pudding is a failure: "If this were a NASCAR race, my car would be doing somersaults through the air, landing on its roof and bursting into flame." 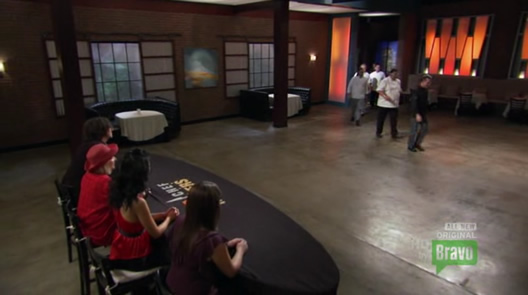 In the kitchen, Rick and Ludo are arguing. Why did YOU take fish & chips? Why didn't YOU do lamb bourgignon? Ludo keeps talking when Rick feels like he should be listening to him, and eventually Rick gets shouty. So who has a bigger penis? Who cares? They've both been talking shit about each other all episode long and behaving like spoiled children. Turn off!

Carmen got heat in the last episode for not making her own sausage, as contestants have on Top Chef in the past. Wiley says to the judges, "Not wanting to make sausage—not having the courage of Mark—I found quite a bit of pre-made banger sausage but right next to that were some merguez. I thought the merguez would give it a little twist, then it would be nice, but hopefully not upset the traditionalists because I do that a lot." But Gael liked his dish. She says, "He restrained himself. He didn't create a dish that was an ultimate Wylie Dufresne molecular creation."

Backstage, Ludo proves to be even less charming over time: "English people have no taste. To just cook this food, this shepherd's pie, this Irish thing, I mean what the fuck do you want to do with this fucking good, man? It's disgusting." As former Bravo star Tim Gunn would say: MAKE IT WORK.

Jonathan: Gail Simmons says, "That shepherd's pie was a joy to eat and will now become the standard by which i measure all others." 14 stars from judges (a perfect score from Gael!), 4 1/2 stars from diners = 18 1/2 stars. High score of the night and the season so far! Jonathan is IN, in a major way.

Ludo: Gail says, "You gave us a beautiful plate of food, but the context was nowhere to be found." 9 stars from judges, 2 stars from diners = 11 stars. Mark is out.