The Band 'Girls' Loves Offal from Incanto, Momofuku Ramen, Butter Burgers Not So Much

Share All sharing options for: The Band 'Girls' Loves Offal from Incanto, Momofuku Ramen, Butter Burgers Not So Much 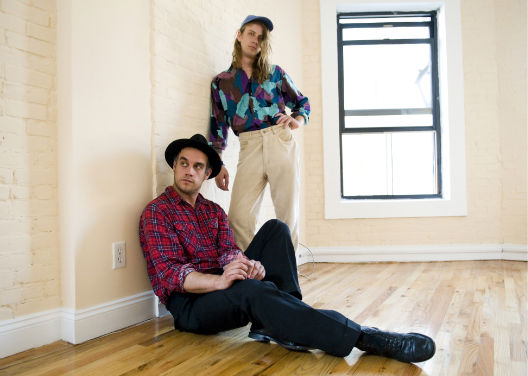 JR White is one-half of San Francisco's Girls, whose debut album made a lot of "best of" lists last year. Before working on the band full-time, White spent many years as a chef in San Francisco. JR took time out of his busy schedule preparing for last weekend’s Coachella Festival to chat about eating on the road, his city-by-city dining picks, and the best offal this country has to offer.

What's the best meal you've had on the road in the last year?
I have to say the best meals on the road are the dinners when I get a chance to cook for myself and the band. It's a rarity, but recently we were provided a with a kitchen with our boarding and I cooked halibut with lentils, pickled shallots, thyme, and dill crème fraiche. Recently, while in Toronto, we had a great meal of various kinds of dumplings and kimchi at Mother's Dumplings. The ultimate meal I’ve ever experienced on the road was in Barcelona during the Primavera Sound Festival. Grilled seafood in the Boqueria Market: razor clams, sardines and octopus all cooked on la plancha and dressed in garlic, olive oil and parsley. A simple gesture of the freshest seafood simply prepared enjoyed best with an Estrella Damm beer. Don’t overlook the sautéed mixed mushrooms either.

On an average day on tour, what are your dining priorities?
Honestly, it’s a case of finding whatever the healthiest option is. Sometimes it’s pretty bleak. Schedules are often very tight and trying to find something in particular can take time we don’t have.

Are there any cities that you look forward to for the restaurants?
Arriving back home in SF is always a treat. New York I would think is an obvious one. Ramen at Momofuku.

Are there any cities that you find lacking for good eats?
The Midwest can be a complete train-wreck for eating. When regional food consists of fried bologna sandwiches and fish fries your gonna find yourself "making do" quite often.

Are there any regional cuisines or dining trends that you’ve gotten to know and like?
I will always be a fan of lesser cuts and offal. Restaurants such as Black Hoof Cafe in Toronto and San Francisco's Incanto do it better.

What's the most disappointing meal you've had on the road recently?
Butter burgers at Solly's Grill in Milwaukee. Butter burgers... need I say more?

Would you recommend working as a chef to someone who is also a musician?
I can’t say that I would recommend a musician moonlighting as a chef or vice versa. Both jobs require a level of seriousness and focus to reach any level of success. The demands for time and energy on a cook allow for little if not anything else in your life. When our band began to take off my cooking suffered. It was a hard decision — one of the hardest breakups in my life — but I had to stop cooking professionally.

Were there any chefs or restaurants that inspired you to want to work as a chef?
My mother. Her weekly trips to the farmers market in Santa Cruz and the simplicity of her food made for a delicious childhood. Judy Rodgers at Zuni Cafe, who I later had the pleasure working for. As much of an artist as she is a cook, there are a lot of lessons I learned cooking with her that I now apply to other artistic outlets in my life, especially music.

What foods from San Francisco do you miss while on the road?
Pork kebab and imperial rolls from Tulan Vietnamese.

Girls' debut, Album, is out now on True Panther Sounds.