KFC Goes Pink With Buckets for the Cure

Share All sharing options for: KFC Goes Pink With Buckets for the Cure 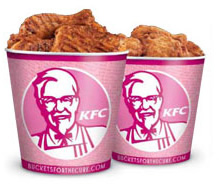 File under damage control? Or just the natural flow of things? The same week KFC released the Double Down sandwich, it also launched a new campaign, Buckets for the Cure, to support the Susan G. Komen for the Cure organization and promote breast cancer awareness. Through May 9th, KFC is donating 50 cents per branded bucket, up to $8 million. Promotion-wise, KFC went so far as painting a KFC store pink, with a resurrected Colonel Sanders, also in pink, lending a hand.

· Buckets for the Cure [Official Site via Slashfood]