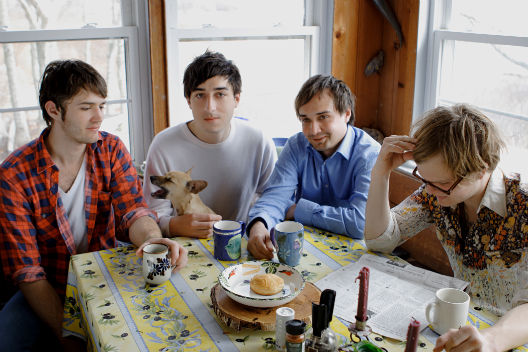 Ed Droste, of Brooklyn’s Grizzly Bear, has logged a lot of time on the road over the last four years or so. As someone who loves a great meal, Ed’s had the opportunity to try some world-class restaurants while on tour, and also suffered some serious dining duds. Droste took time out of his busy schedule preparing for this weekend’s Coachella Festival to chat about eating on the road, his city-by-city dining picks, and how much marrow he can handle.

What's the best meal you've had on the road in the last year?
I have had three really memorable abroad food experiences this past year. The first was when my friend and composer (who worked on our recent album with us) finally introduced me to [Fergus Henderson's] St. John in London and its sister-restaurant Bread and Wine, which has essentially revolutionized our trips to London (a city we often have time off in for promo, etc). I don't think there is ever a time we don't make a visit. While St. John was the first and is the classic, sometimes there's only so much marrow I can handle, so I often opt for Bread and Wine for really what has got to be one of my favorite restaurants in the world. I'll eat anything once and at either one of those two spots I have a lot of "firsts."

Another memorable place I once went to when traveling with a friend to Japan in 2003 her parents took us to this amazing restaurant outside of Tokyo in Mount Takao I took the band there last summer and we had the most amazing meal in the probably the best setting I've ever dined in. Also, in Osaka I was taken to the best Udon restaurant I've ever been to called Tsuru Ton Tan — a friend-of-a-friend there who's a musician in the band the Boredoms took us there for what was the freshest Udon I've ever had, was great for [my band-member] Chris Bear, too, as he's a vegetarian.

Lastly, when in Australia this past January, I went to the Royal Mail Hotel and sampled some of their incredible cooking. From what I gathered they grew a lot of their own vegetables there, and most of the meat was locally sourced. It was definitely the culinary highlight of 2010 so far. Incredible place.

On an average day on tour, what are your dining priorities? Do you try and eat out at restaurants you've heard about, or is pretty much a take-what-you-can-get situation?
It's mostly, when pressed for time, a take-what-you-can-get situation, which is helped a lot by using sites like Yelp. So often we roll into a city and are clueless as to what to eat quickly, and I've found often you can find a pretty decent Pho place if you just look around for two seconds. Or good BBQ in cities that are famous for it... Often though it's the universal backstage standard of hummus and pita and some random veggies. Post-show if you are anywhere that's not NYC most good food is closed already, so you have to settle for pizza or take out. We definitely do what we can and have learned from years of traveling how to find things we like, things that are on the healthier side.

Are there any favorite cities that you look forward to for the restaurants?
Well, now London. I love eating in Los Angeles and Portland, Oregon. I love Austin for all sorts of different kinds of cuisine — Mexican, Tex-Mex, BBQ. And of course, anywhere in France or Italy tends to just be amazing.

Are there any cities that you find lacking for good eats?
I have trouble in a lot of smaller Midwestern towns finding food I'm excited about. Places like Cleveland and Milwaukee, etc etc. I'm sure there are great things there, but maybe it just takes more time to figure out where they are. Also, if you aren't in the mood for a steak (which you can often find a quality steak almost anywhere in the states) — sometimes the lighter, more international options just aren't there. Minneapolis is a big city that I haven't had any culinary delights in yet. I once stopped in Bismark, North Dakota and we were determined to find something that wasn't a chain but for over an hour the best thing we could find was Chili's.

It seems like you've spent some time touring in pretty much every corner of the country — are there any regional cuisines or dining trends that you’ve gotten to know and like?
I've been dying to try out this mythical Korean taco truck craze that's been going on in Los Angeles — think I heard about it first on your site actually. Naturally when I come to California I get really excited about Mexican food and every time I go I discover more places to go. I'm a fan of all the new seasonal restaurants that are popping up, using only things in season and locally found. Generally speaking if it's fresh it's delicious and you don't have to be an incredible chef to make fresh taste great.

What's the most disappointing meal you've had on the road in recent memory?
New Zealand was a dud for me. Was there for two weeks and never had anything that was above "OK" — It was the most gorgeous countryside I've ever seen and you read all about the amazing lamb and produce coming from there but I guess they exported it all? Because I had a hard time finding really amazing meals there. Decent, nothing TERRIBLE but nothing that really stood out other than one fish and chip spot in Manganui.

I imagine that with the kind of touring that you do, hitting up chain restaurants must be inevitable. Any favorites?
Honestly I've been able to almost 100 percent avoid them. In the early days when we didn't have a bus and drove ourselves everywhere it was a much more difficult conundrum. The boys opted for Subway a lot but something about Subway always grossed me out with their fake bread smell being pumped into the air and the cold cut after cold cut. If forced to eat fast food, I'll usually opt for something chicken-based, of the "strip" variety perhaps with a dunking sauce. But honestly it's been ages since I've had that. At this point as I mentioned before with Google Maps or Yelp I can find a good cheap ethnic food that's far superior. I did go through a nuts and beef jerkey phase for awhile... Ate a lot of shredded carrots with vinaigrette that they had in French gas stations.

Are there any venues out there that stick out in your mind as having pretty good food?
Swiss and French venues often will cook for you and you have a 50/50 shot of it being great or just whatever. I remember once we were in Denmark for Thanksgiving and the venue cooked us their idea of what a Thanksgiving meal was. It was really nice and semi-tasty. Mostly though, venues are not a place to have an exciting meal.

What foods from NYC do you miss while on the road?
I miss that I can find any type of food at almost any time. I miss Marlow & Sons a lot. I miss Ippudo, although I don't miss that endless wait for a table. I have a friend who's really good at discovering undiscovered or small gems in the outer boroughs and I miss having him take me to the spiciest Thai food in Queens or Turkish food near Coney Island.

What's the best meal you've had in NYC recently?
A few spring to mind. Southern Spice in Queens. The Modern with my grandmother recently. A bowl of Ramen at Ippudo a few weeks back when it was still cold out.

A Quick Survey:
Best pizza in the country: Lombardi's, NYC
Best burger in the country: I'm not a huge burger fan to be honest. I'd prefer a steak.
Best "fine dining" experience: tie: Momofuku Ko and The Modern
Best diner: I never go to diners — not big on greasy spoon Diner cooking. I usually just end up getting a BLT which is the same everywhere. Diners are ok I'd just rather some curry instead.
Favorite chain restaurant: I guess Chipotle?
Favorite Coffee Shop: Gimme Coffee Brooklyn! Right around the corner from me. Love the people that work there too.

Grizzly Bear's Veckatimest is out now on Warp Records.

· Sound Cheque: The Pains of Being Pure at Heart [-ENA-]
· All Sound Cheque Posts on Eater [-ENA-]