Share All sharing options for: Top Chef Masters Season 2, Ep. 2: Who Do I Have To Kill?

On Season 2 Episode 2 of Top Chef Masters: We learn who forgot the tray of food we keep seeing in the season previews, how many chefs it takes to boil a pot of yucca, and that there's a villain in our midst! This week's contestants — all new to Top Chef Masters — are David Burke, Carmen Gonzalez, Monica Pope, Thierry Rautureau and Marcus Samuelsson. Thierry starts things off the right way: "How much do I want to win? Who do I have to kill?" 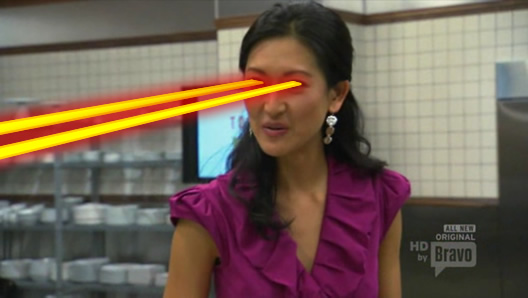 Kelly Choi is remarkably animated this episode—good job, producers, for finally upgrading her emotion chip! Perhaps this episode is the start of her real growth as an artificial life-form. The challenge is to make her a grilled cheese sandwich in twenty minutes and I'm excited to see whether the Choibot upgrade means she'll actually be able to eat with gusto for the first time ever. Monica talks about feeling like a fish out of water because everyone's traditionally trained and she only went to culinary school for three months, and I get the feeling that she will somehow be providing the major drama of the episode. Carmen cuts her finger fairly badly, bad enough that a bandaid won't do it, but just wraps her finger in a towel and keeps cooking.

And of course, because it's illegal to do anything that involves Marcus Samuelsson and not discussing his creation myth, Marcus talks about how he was orphaned in Ethiopia at three and then was raised in Sweden by adoptive parents. If you've read a lot of articles about him, after a while it gets really annoying that his background is seemingly ALL people can talk about: Orphaned African boy! Raised by whites! In Sweden! Succeeds in the Big Apple! Wow wacky! It seems like everyone get so charmed by his more-Obama-than-Obama-ness. The food industry gets lit up about how rare it is for a black man to be a big-name chef in New York City, proclaiming that discrimination must for sure be going away, forgetting that a) on some level, Samuelsson is still part of the long-standing tradition of European marquee chefs in this city, and b) women and Asians (other than David Chang and maybe sushi chefs) barely make blips, but they're still doing better than the South Americans that, as Anthony Bourdain has been pointing out for years, actually run most kitchens in New York City. Not that any of this whole brouhaha is Marcus Samuelsson's fault; it's a reflection of the food industry and American society at large. Anyway. It's grilled cheese time!

Carmen: Italian baguette with manchego, garlic, cilantro and lime. The plate looks a bit sad, like the tomato slice was thrown on last minute. She tries to figure out what Kelly's thinking but finds her to be inscrutable (and yes, before you get your pants in a twist, I can so totally use that word to describe her because I'm Asian too and thus have the same ability to produce high quality poker face. Genetics!). 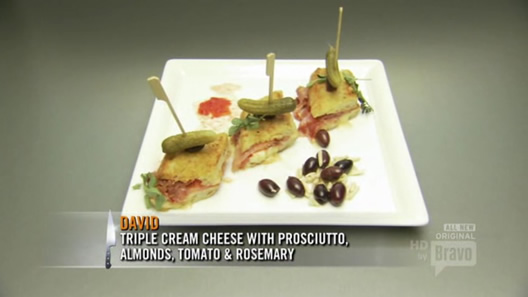 David: Triple-creme with prosciutto, almonds, tomato and rosemary, on a baguette. If you've ever eaten at one of his restaurants, you're not going to be surprised that he had the most elaborate plating, with tiny pickles speared through the tops of each sandwich. Did he bring his own spears? Does he carry them around in a little fanny pack? I can only hope. 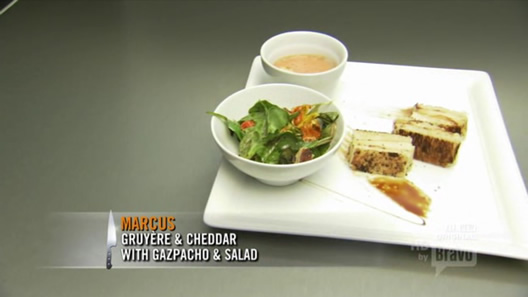 Marcus: Gruyere and cheddar (on white bread?) with gazpacho in a bowl and a small salad. He says, "hopefully aesthetically my cooking style comes out," which is a little weird given that it's not really a spectacularly well-plated dish. 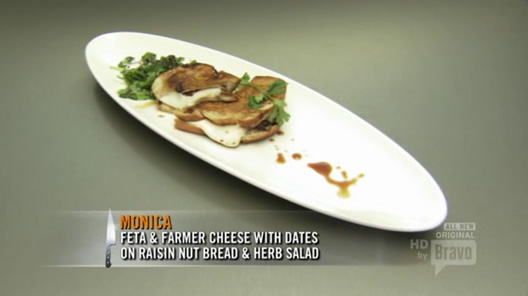 Monica: Moroccan-inspired, feta and farmer cheese with dates on raisin nut bread and a sad-looking herb salad. I want to say the plating looks a little droopy but honestly, her sandwich looks super, well, comfortable in a way that only very old couches usually are. And I mean that as a compliment. Marcus and Thierry both also blended two cheeses, but Monica's the only one out of all five that's experimented with the bread.

Monica wins! She receives five thousand dollars for her charity and an advantage for the elimination challenge. Marcus is pissed. PISSED! I can smell coming drama! 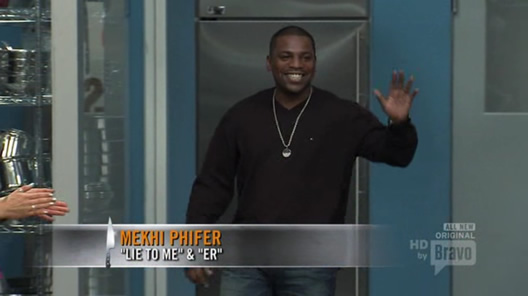 Choibot says they're going Hollywood and in walks actor Mekhi Phifer—they're catering his birthday party tomorrow! Carmen is very clearly STOKED to see him and says he's her "favorite ER doc after George Clooney, who is [her] boyfriend." Which is adorable. Monica's advantage is that she gets first choice of protein at Whole Foods and no one else can choose what she picks; she goes for shrimp and throws Thierry off because he was planning to make gumbo. David says, surprising no one, that he's "not gonna play it safe. I'm trying to do something that's a little more unique." Marcus starts talking about how because he was raised in Sweden, this challenge is HARD, because he wasn't raised with soul food. Um, Carmen grew up in Puerto Rico and Thierry in France so they weren't exactly raised with soul food either? How is not going to be equally hard for them? Marcus, if anyone actually expects you to be amazing at soul food just because you're black, that's some racist bullshit!

Marcus: BBQ chicken with mac and cheese and collard greens—super standard soul food fare. I can't decide if this was a boring choice or a ballsy one, since if you're doing a classic you have to really knock it out of the park, especially if you decide to reinvent it.

David: Sweet potato custard with crab, hush puppies and pickled watermelon rind. He says, "The flavors of the south are certainly there, but it will not look like a Southern dish." And he's not kidding either, as we'll see at the party. 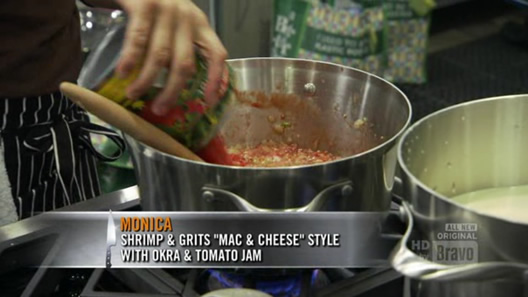 Monica: Shrimp and grits "mac and cheese style" with okra and tomato jam. It's kind of a turnoff to see she's using canned tomatoes instead of making her jam from scratch, no? She's the only contestant from the South and cooks in the South, next door to an actual soul food restaurant, and this is pretty close to her style of food, so between all of that and her Quickfire win, this is really her challenge to lose. She's most worried about losing to Marcus and says she feels "like I'm in competition with him on some level." NO DUH, YOU'RE ON TOP CHEF MASTERS.

Thierry: Moroccan pork shoulder, farro (with bacon), roast cauliflower and brussels sprout slaw. Thierry is so funny and chatty and explainey, he is a charming tiny man in a hat. I bet he'd do really well with a cooking show. 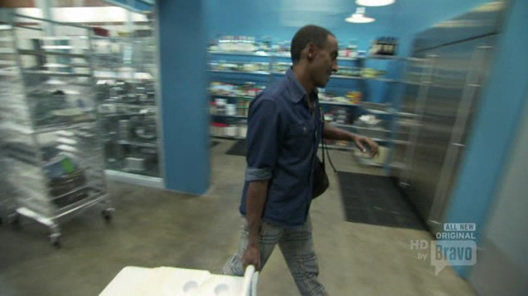 And now two shockers! One is the forgotten tray of food that's been promised in the previews, and the second is that holy cow, Marcus is wearing BURBERRY PANTS.

I thought it would be Monica's but the forgotten tray is Carmen's—do the other chefs have her back while she goes 16 miles to the studio and back to get it? David has a charity to cook for "and [it's] not named Carmen," but he, Monica and Thierry help her anyway. Marcus refuses to help because his dishes are "extremely thought-out" and he has to focus, which is so passive aggressively insulting .

He goes on to say Monica should focus on her own food, that it's a competition, yadda yadda yadda, and I keep hoping he's going to launch into my favorite reality show cliche of "I'm not here to make friends", but even though he doesn't, he's clearly the cold-hearted villain of this episode! 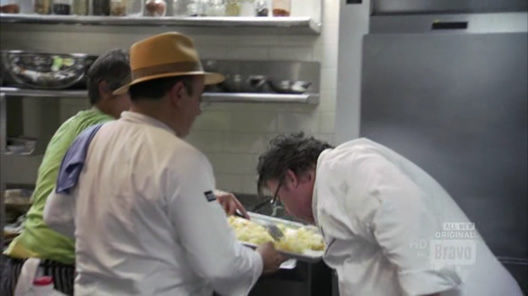 Also: I love that we've found out that the magical number of chefs needed to boil some yucca is NOT three, because amazingly David, Monica and Thierry have together managed to burn the yucca so badly Carmen cannot salvage it, deciding to just serve the stew even though she can't win. Thierry says, "That poor girl. she cuts her finger—I mean, really badly—the day before, she forgets her dish, we burned the yuccas? But I think overall, it worked out well for her anyway," and if you heard him say that and actually still think Carmen didn't win this episode, I've a bridge I'd like to sell you. 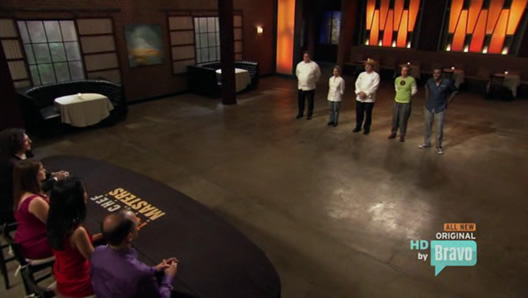 Carmen: Gail Simmons says, "You recovered beautifully from what i know was a difficult start to give us a dish with surprising complexity." 11 1/2 stars from judges, 4 from diners = 15 1/2 stars! She has the high score of the night, "the most amazing comeback ever on Top Chef Masters."

Thierry: James Oseland says, "You had some great individual dishes, I just wish you had edited a few of them out." 8 stars from judges, 3 from diners = 11 stars.

David: Jay Rayner says, "I admired your playful take on soul food, I just couldn't quite admire the dish it produced." OUCH. 7 stars from judges, 3 from diners = 10 stars, and David Burke is out.