Dana Cowin on the Lack of Female Best New Chefs

Share All sharing options for: Dana Cowin on the Lack of Female Best New Chefs

Last week when Food & Wine announced its 2010 Best New Chef awards — one of the most coveted distinctions in the food business — there was, as might be expected, some controversy because only one of the ten chefs selected was a woman (the same thing occurred in 2009). So we got in touch with Food & Wine's Editor-in-Chief Dana Cowin who graciously took the time to answer a few questions: 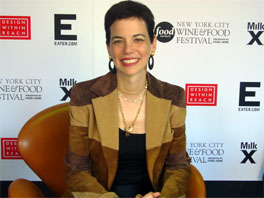 So why is it that only one out of the ten best new chefs is a woman?
If you look, objectively, at the ratio of men to women executive chefs in the country, you'll find the answer right there. There just are not that many women who have chosen to be executive chefs. Women are well-represented in the industry. There are amazing sommeliers, pastry chefs, front of the house, and artisans that we cover all the time in the magazine. We do look for women and we try to support them.

That said, the Best New Chef award has specific criteria: You have to run your own kitchen for five years or fewer with your own innovative, original menu. It's possible that if we widen the parameters to include a greater variety of cooking in America today—say a neighborhood bistro—we might catch more women chefs in our net. But it just so happens that with the groundbreaking work we're looking for, women also just aren't nominated.

We get hundreds of nominations every year, and the ratio of men to women nominees is around 20:1. So we start with a teeny tiny pool of women nominees. When the editors go around the country to eat, we're looking for the best talent. We don't factor atmosphere, wine list, service, or the chef's sex into the equation.

So is it a question of PR? An argument could be made that female chefs tend to shy away from publicity, instead focusing on their work.
If we could get only chefs who didn't have any PR, we would. With Best New Chefs, our goal is to recognize chefs who haven't pressed themselves forward. For this particular award, we like to discover the chefs on our own. It's not a question of paying publicist to lobby us; we don't take nominations from PR representatives.

A lot of our nominators are actually past Best New Chefs. They can't nominate their past sous or exec sous; or if they do, we would need a second nomination to put them in the running.

At a more granular level, it's a case of how the nominators found these chefs. If a chef is known in their own neighborhood, but not to critics or the foodie curcuit, it will be difficult for us to find them. Passionate foodies and local critics can give chefs the best buzz. Being part of the community both in the restaurant, the neighborhood, Facebook, Twitter can also get you recognized without paying a PR person.

You see so many females in culinary school these days, and not just in pastry programs, and you wonder, where do they all go? Why are the numbers so disparaging when it comes to executive chefs? Do you think anything can be done about this? Or is this just a deep, cultural, intractable problem?

The first thing I'd ask a potentially un-PC question: Is it really a problem if there aren't a lot of women executive chefs? It definitely IS a problem if they aren't represented because they're discriminated against, not allowed to move up the ladder of success. But I'm not sure this is the case. Unlike getting to the top of a corporation, where you depend on others to be promoted, with a restaurant, you could open your own if you want to. I'd argue that women find very satisfying jobs throughout the hospitality industry where they can use their knowledge and still have a good work-life balance. One could say that many women have made very intelligent personal choices.

Let's also remember there are some extraordinary women chefs cooking today—many who've been chosen as Best New Chefs—Nancy Silverton, Suzanne Goin, Maria Hines, to name a few. And there's a lot of up and coming female talent, too. We look forward to recognizing them in the future!