The Pains Of Being Pure at Heart Love Breakfast at Shoney's

Share All sharing options for: The Pains Of Being Pure at Heart Love Breakfast at Shoney's 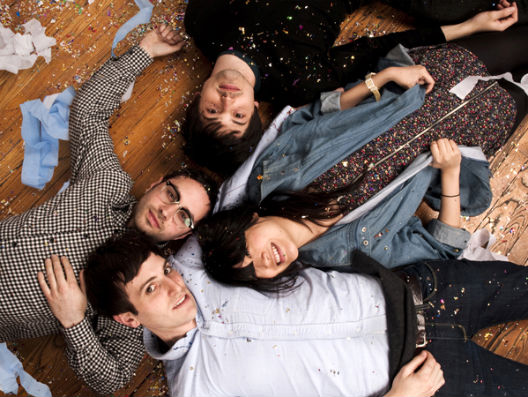 Finding good food to eat in unfamiliar cities can be daunting, and no one understands this more than a rock musician on tour. Peggy Wang, the keyboard player and vocalist in New York's The Pains of Being Pure at Heart, was on the road for much of last year in support of the band's critically acclaimed self titled debut and recently released follow up EP, Higher Than The Stars. Thankfully, Peggy has a knack for sniffing out good places to eat in strange new lands. She spoke with Eater about the band's favorite restaurants across the country:

On an average day on the road, what are your dining priorities? It definitely depends. If free food is available, like free hotel breakfasts, or free venue dinners, we take advantage of that. But if there's some kind of delicacy that's a must-try in that city, whether it's a garbage plate in Rochester or Kobe beef in Kobe, we do go out of our way to eat it. But certain members of our band have a very adventurous palate while I mostly like to eat healthy. We joke that Kip has a "not-poop" philosophy to eating. If it's not poop, he'll stuff his face with it.

Any favorite cities that you look forward to for the food? I definitely like San Francisco and the West Coast because the vegetables and fruit are so fresh. And any place where you can get really good, cheap sushi. Japan pretty much takes the cake for food though. A Japanese 7-11 is probably more exciting to me than eating at a fancy restaurant in New York.

Are there any regional cuisines that you’ve gotten to know and like? There are definitely surprisingly good eats in places you wouldn't expect. Like Kip and I had one of our favorite meals ever on our first tour, when we played in a tiny sweat lodge in Tallahassee. There was a vegan Jamaican food stand, and we had this braised cabbage that was sooooo amazing. There's typically pretty good vegan food in places you wouldn't expect, because usually the vegetarians there are aware that there isn't much to choose from.

With the kind of touring that you do, hitting up chain restaurants must be inevitable. Any favorites? My bandmates love In-n-Out Burger. Alex and Christoph insist on getting Whoppers anytime we see a Burger King. And oh my god, we LOVE Shoney's. Or at least Kip and I do. It's kind of our thing, that whenever we see a Shoney's, we have to have breakfast there, and we have to win a stuffed animal out of the vending machine. I actually grew up in New Orleans, and my parents would take me to Shoney's for breakfast almost every Sunday, so I have sentimental ties.

You guys are based out of New York—are there restaurants you miss from home, while on the road? YES. I miss the vegan muffins that I get at my corner deli, and there's a sushi place in Greenpoint called Sapporo Haru that has unlimited free sake with dinner that Kip and I have had so many fun dinners at. Also, my boyfriend and I are really into ordering Burmese food from Mingala. I also miss Angelica Kitchen, and buying in-season fruit in Chinatown near where I work.

And when you’re in New York what are your standbys? Christoph loves the sandwiches at Num Pang. We also both like the Tuck Shop for Australian pies. Alex swears by Spice Cove for Indian food. And now that we've been to Japan, I'm afraid I might go full-on Japanphile and start only eating at Uminoie (sho-chu cocktails!) and the Okonomiyake stand (Japanese cabbage/egg pancakes!) on 10th street and Soba-ya and Curry-ya. I guess I'm an Asian with yellow fever.

What's the most disappointing meal you've had on the road? I had the most depressing foccaccia sandwich the other day while waiting for the ferry to take us to the Taronga Zoo in Australia. It was $10, and it literally tasted like the vegetables had been roasted in nail polish remover. And the guys working at the counter were scumbags.

Bonus Video: Here's the band's video for "Everything With You," starring Peggy:

The Pains of Being Young At Heart's new EP, Higher Than The Stars is out now on Slumberland Records.
[Photo Via: Annie Powers]