This weekend, at the Bocuse d'Or finals at the Culinary Institute of America's HQ in Hyde Park, New York, Chef James Kent of New York's Eleven Madison Park won the honor of representing America at the world's most respected culinary competition in Lyon, France next year. Each competing chef works on a two person team, aided by their commis; Kent's partner was Tom Allan, a sous chef at EMP.

Kent and Allan beat out eleven other chef teams from across the country, and a tipster on the floor of the event brings word that the competition was close, with Jennifer Petrusky from Chicago's Charlie Trotter's, and Percy Whatley from California's Yosemite-area restaurant, The Ahwahnee, performing head and shoulders above the rest.

The competition on Saturday was comprised of each of the chef duos creating two protein-based entrees, and judged by a pannel of American culinary luminaries including Daniel Boulud, Thomas Keller, Grant Achatz, André Soltner, as well as Jerome Bocuse, the son of the organization's founder, Paul Bocuse, and Timothy Hollingsworth, the chef who represented America in the last competition in 2009. 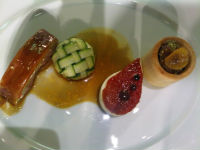 The first of Kent/Allan team's winning dishes was a salmon salmon pavé with leeks, caviar and Alaska crab garnish, accompanied by a chilled mouse with tartar, roe, beets and herbs. The other winning entree was a bacon wrapped vol-au-vent of lamb with sweetbreads, accompanied by a tart of tomato confit with basil and olives.

With the competition in Lyon a little over a year away, Kent and Allan will now begin an intense training process, under the tutelage of Daniel Boulud, who is one of the creators -- along with Keller and Jerome Bocuse -- of the Bocuse d'Or USA Foundation, which was founded in the hopes of brining an American chef to the top ranks of the competition. At the awards dinner following the competition Boulud, (who our tipster reports was hilarious as MC of the event), remarked of the win:

"Thomas, Jerome and I and the entire Culinary Council are so happy to have selected Chef Kent to represent the United States at the international competition...We truly believe this talented candidate is committed to culinary excellence and exemplifies American gastronomy as we saw today during the competition."

No word yet on whether Kent/Allan will take a hiatus from their duties at Danny Meyer's four-star resturant in New York to prepare for the event. As it stands, the closest America has ever come to winning the competition is 6th place, acheived last year by Timothy Hollingsworth of Napa's French Laundry. The heat, as they say, is on.