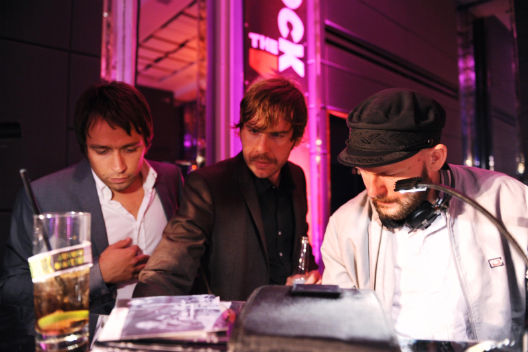 While the life of a rock musician on tour sounds like a dream to many, the ever-present problem of finding good food to eat in foreign cities can be daunting. Swedish rock trio Peter Bjorn and John know these challenges more than most bands, as they’ve been zig zagging across the country ever since their single Young Folks, and its album, Writer's Block, hit it big in the U.S. a few years ago. PB & J do, however, have one great asset where eating out is concerned; their drummer, John Eriksson, a committed restaurant lover who keeps up with the big reviews and has even done a little food writing of his own. John spoke with Eater about the band's favorite restaurants across the country:

?When the band is on tour in America, are there any favorite cities that you look forward to for the dining? We have had a lot of wonderful experiences in the US and I'm starting to have some favorites in certain cities. San Francisco has some great places for oysters and seafood. There is Scoma's on Pier 47 for example. When entering this seafood restaurant you might feel that you are in a tourist trap but that is not true I think. I had the best and freshest oysters and fried calamari there, and the waiter looked like James Bond. Swan Oyster Depot is a great oyster bar in the same city and it's really close to the Great American Music Hall. In Seattle I ate the most perfect grilled sandwich I have ever eaten in my entire life. Across the street from Hotel Max (where the sushi is great) there's a place called Pamela's Fine Foods and the Greek, jalapeno spiced master sandwich was amazing. When I took the first bite I started to cry and it wasn't because of the jalapenos. In New York there are of course a lot of good stuff too.

It seems like the band has spent some time in pretty much every corner of the country. Are there any regional cuisines or dining trends that you’ve gotten to know and like? The "Seafood gumbo" at Coop's Place in New Orleans was a new tasteful experience. ?If you had to pick one meal that you guys have had as a band in your experiences on the road, which would be your favorite? Hard to pick one but I will go for a superb evening at a restaurant in Toronto. Don’t know the name of the place but we had a blast there together with the band "Chairlift" that was opening up for us during one of our best tours ever. We had oysters and champagne and fantastic small tapas dishes. We drank awesome wine and we listened to a speech about ships. You should try the mushroom pasta if you find this restaurant. Look for a cool place with a bar downstairs and a good looking waitress upstairs.

And the most disappointing meal on the road, if you had to pick?I'm sorry, but the UK and the US have to shape up their bread. There is too much light and swampy sweet stuff. Bread should be heavy and crispy. (Sweden has just started to understand this...). Also on our rider we always ask for organic stuff and often we don’t get that. Venues in the US are the best at fixing that but there is also a lot of stuff that says "natural" or "fresh" and that isn't the same as organic usually, so that can be a bit disappointing sometimes.

I imagine that with the kind of touring that you do, hitting up chain restaurants must be inevitable. Any favorites? We really try to avoid chain restaurants but from time to time we have ended up eating at PF Chang's and they are ok.

Are there any venues out there that stick out in your mind as having pretty good food? The dinner at Great American Music Hall in San Francisco was nice and the 930 Club in Washington DC always has great food ready for you when you arrive. We love these two venues.?

You guys are from Sweden. Does anyone ever seek out Swedish food on the road – any recommendations? I wish we could find the awesome dish "Pite Palt" that comes from my hometown Piteå (in the north of Sweden) but you can't even find that in Stockholm so I think the chance of finding "Pite Palt" in Buenos Aires is quite low. I can recommend my guide to Stockholm though, there are some ok tips in it.