Share All sharing options for: The Top Ten Must-Watch Food Videos of 2010 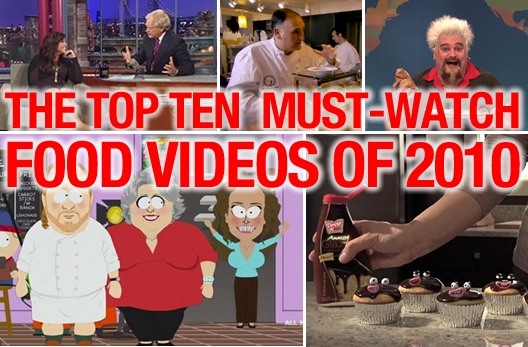 What would the internet be without videos? How else would we be able to enjoy people doing idiotic/hilarious things on live television, in their homes, or halfway across the world? Below, David Letterman declares war against food television, South Park skewers food celebrities, and the Chinese put live crabs in a vending machine. Enjoy!

10. José Andrés on 60 Minutes: Meat Is Overrated, Fruit and Vegetables Are Sexy
Back in May, 60 Minutes ran a profile of Spanish chef José Andrés who runs eleven restaurants in the US. In the segment, Andres called meat "overrated" and "slightly boring," saying, "I believe the future is vegetables and fruits," presaging the whole "vegetables are the new meat" trend.

9. Gordon Ramsay Gropes Sofia Vergara on Jay Leno
Like a gropey little boy except one that's old and wrinkled and a dickhead, Gordon Ramsay chose not to keep his hands to himself when he was on Jay Leno with actress Sofia Vergara this year, and it made everyone uncomfortable. He also mocked her vacation pictures and made fun of her kid's name. Enjoy!

8. Stephen Colbert Mocks Raw Milk Hippies
After raw foods club Rawesome Foods got raided by police, Stephen Colbert investigated its hippie membership. Needless to say, they were a bit flummoxed by the raid, and Colbert declared they put "the 'dumb' in 'freedom.'"

5. How Not to Deep-Fry a Turkey
Every year, people across the country decide to try their hand at deep-frying a turkey for Thanksgiving, and every year a handful of them royally mess up by forgetting to totally defrost and/or dry off the bird. Thankfully, some of them videotape the resultant fireball and post the clip on YouTube for all to enjoy.

3. Chinese Introduce Live Crab Vending Machine
Despite significant vending machine innovation from Japan this year, it was China who wowed us with the craziest vending machine we've ever heard of: a machine that sells live crabs. Stephen Colbert had some even crazier ideas for vending machines, including crystal goblets and angry bees.

2. David Letterman vs Food Television
Who knew David Letterman was so passionately against food television? The talk show host ranted against "the culture of abundance" and shows like Cupcake Wars and Man v Food several times this year. Problem is, Letterman often has food television shows as guests on his show. Whoops! No worries: he apologized, both to Rachael Ray (who kindasortamaybe agrees with him?) and Jamie Oliver.

1. Duncan Hines' Racist Blackface Cupcake Commercial
What could be more benign than a cupcake? That's what we thought til we saw this Duncan Hines commercial, called "Hip-Hop Cupcakes," which features cupcakes beat-boxing in blackface. 2010: the year cupcakes hit rock bottom?