Share All sharing options for: 2010: The Year in Chefs vs Critics 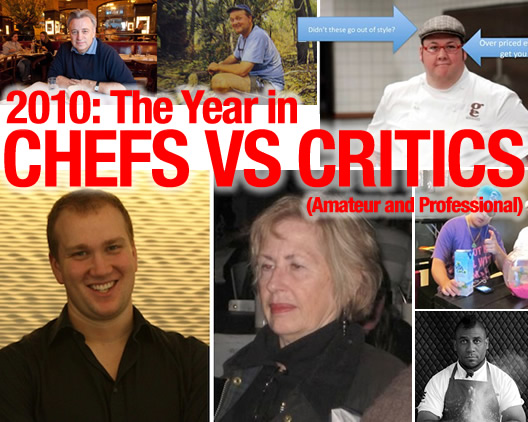 Can't stand the heat? Chefs don't really have the option of getting out of the kitchen, so instead they respond to criticism by airing their grievances publicly. Whether it's in print, on blogs, on Twitter, or over the phone, chefs certainly have a way of letting their critics know exactly how they feel. Words of vengeance, first against the pros, then the amateurs, abound below.

LA's Red Medicine Launches Preemptive Strike Against Critic
Before Los Angeles Times critic S. Irene Virbila could try a bite of Beverly Hills restaurant Red Medicine's food, the restaurateurs took her picture and kicked her out. They then posted the photograph of the previously-anonymous critic online, saying:

We find that some her reviews can be unnecessarily cruel and irrational, and that they have caused hard-working people in this industry to lose their jobs -- we don't feel that they should be blind-sided by someone with no understanding of what it takes to run or work in a restaurant.

I found the review personally and professionally offensive. It was a direct attack on who I am, my personal style and the innovative approach we have taken on creating Lafitte’s mandate, as well as a hit to the respect and honor of our Crew...Late to the game as we know [Chron critic Michael Bauer] is, there was no new information we could gleam from his biased and unbalanced review.

"Finally, another inaccuracy in your review is the bizarre claim that I was wearing (of all things) a cardigan? I may not be a paragon of fashion but I haven't worn a cardigan since 1965. (The year Dylan went electric!)."

"But if he’s a 'restaurant auteur,' as he’s been called, his recent work is more like 'Godfather III' than the Francis Ford Coppola masterpieces it followed (well, maybe not quite that lame). The maverick who played with fire now plays it safe."


So McNally figured Cuozzo needed to feel his wrath as well:

Cuozzo's an illiterate, low-life hack with the backbone of a centipede. If not, he'd be criticizing the abominable lack of quality on the pages of the New York Post, not the latest crop of restaurants to open in Manhattan.

"Thought a Pulitzer meant you checked facts. Sneering at me for something I never said is either mean or sloppy. I'm offended."

"I loved this review... I'm going to change my attitude. I didn't know people expected more of me. I never thought I'd even be up for review with the NYT... But am I going to change this time? Yes. I can't just wing it anymore. People are paying good money for this."


And then he posted a letter from his mom, who took the opportunity to give Huang what-for:

"No matter what career you explore, there always going to deal with: discipline, honest hard work, social skills, leadership ON TOP OF YOUR PERSONAL TALENTS... Your talents will not shine or truly succeed until you have satisfied the basics that other competitors have already."

"I felt it would be a crying shame to pass on such an awesome opportunity to highlight the ridiculousness that is Yelp. The fact that someone has the ability to openly critique a business that has yet to open, leads me to question the legitimacy of the reviews involving businesses that are in actual operation."

Marcus Wareing Berates Bloggers for Bad Review
British chef Marcus Wareing called some London bloggers who posted a negative review of his Marcus Wareing at the Berkeley on their website to personally rip them a new one. According to the blogger in question, Wareing "ranted" at her and her husband and was "actually abusive." She also claims he asked her, "How would you like me to write about you and your appearance and the way you dress?" Wareing later defended his right to respond to the review.