2010: The Year of the Novelty Sandwich

Share All sharing options for: 2010: The Year of the Novelty Sandwich 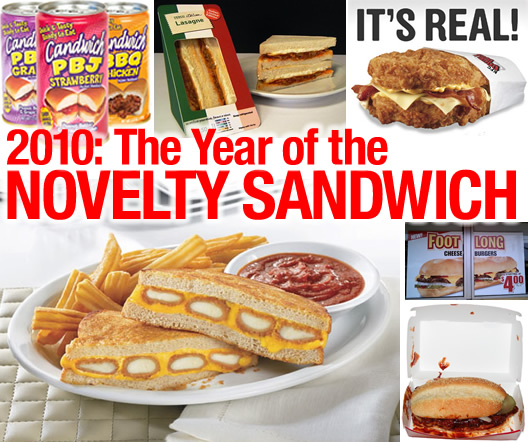 2010 was a great year for sandwiches, albeit not always sandwiches you'd want to eat. We've kept track of the craziest of the novelty sandwiches, from the media frenzy surrounding the McRib to lasagna sandwiches to sandwiches in cans. Of course, despite the best efforts of both foreign and domestic fast food chain restaurants, 2010 will likely be forever known as the year of KFC's Double Down. Let's clog some arteries, shall we?

The Double Down Sets the Standard
KFC launched the Double Down on April 12, 2010, and there was pretty much immediate national hysteria over the breadless fried chicken, bacon, cheese and special sauce "sandwich." It was parodied, advertised on the backsides of college-aged girls, and helped us out a critic. In short, it set the novelty sandwich standard.

The Candwich: Innovations in Packaging
Sometimes a sandwich qualifies for novelty status not because of the sandwich itself, but because of its packaging. The Candwich featured flavors that were innocent enough (Peanut Butter and Jelly, BBQ Chicken), but with the added benefit of coming in a can. Stephen Colbert declared it "an innovation in the field of sandwich."

The LAS-andwich: a Lasagna Sandwich
Lasagna. Sandwiches. Totally disparate food items, or a match made in novelty food heaven? British grocery chain Tesco decided to find out with the LAS-andwich; our poor taste-tester decided it was likely the former.

The Footlong Cheeseburger; the Pizza Burger
You know what's better than a regular cheeseburger? A foot-long cheeseburger. Or maybe an enormous a pizza-shaped cheeseburger?

The Return of the McRib
Oh, artificial scarcity: McDonald's reintroduced its cult-favorite the McRib late this fall nationally to a ravenous fan base. And then, just like that, it disappeared again.

Minor 2010 Novelty Sandwiches
· The World's Most Expensive Cheese Sandwich
· The Philly Taco: A Cheesesteak Wrapped in Pizza
· The Conan: An Enormous Monster of a Sandwich
· The 500-Calorie Krispy Kreme Cheeseburger
· The Mr. Potato Skin Sandwich Uses Potato Skins for Bread