Husband and wife team Aki Kamozawa and H. Alexander Talbot own a culinary consulting business and have now written a book based on their blog of the same name, Ideas in Food. We talked to the duo about their creative process, the difference between professional and home-cooking, and the day-to-day life of a culinary think-tank.

What was it like adapting your blog, which is largely about exploring what we can do with food, into a book that would be useful to readers?
Talbot: Well you cut right to the chase there, didn't you. How do you distill six years of work into a 300-page book and make it accessible to everybody?

Kamozawa: A lot of hard work. 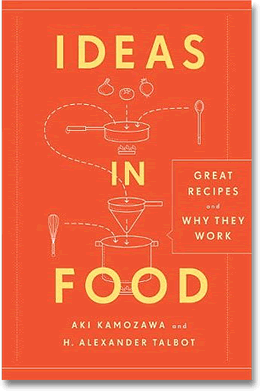 Alex: It was a lot of editing. It was getting it down to I think the least common denominator. What best expresses the idea. Because more often than not, what's hardest are the simplest things, whether it be, you know, pasta sticking together or something along those lines. Because of that, it was interesting to bring it back down to not the complex but the simplest form.

Kamozawa: I think that in a lot of ways we cherry-picked what we thought was the most useful information off the website and then just kind of expanded it to make it more accessible. I mean, in essence we just tried to write the book we wished we had had when we were younger cooks.

The book is split into professional and home-cooking sections. In general, would you say your cooking more geared towards one or the other? Is the line-blurred? Who's your audience?
Talbot: I think it's definitely blurred. There's stuff in the professional section which is a little easier to do than the stuff for everybody.

Kamozawa: The ingredients are harder to get.

Talbot: Well, yeah, the ingredients are a little bit harder to get because they're not part of the culinary vernacular. Understanding bread or understanding muscle fibers, those things in the braising section, that's complex, interesting stuff. It's just so much easier to understand than how to use xanthan gum in your sauce. You have to draw a line in the sand somewhere to differentiate things, but it's just a line in the sand. With the book itself, it's not just a rehash of stuff from the blog, it's a bunch of new stuff. That's the first note they gave me on the first round of things.

Kamozawa: The reason why it's separated into two sections was more of an editorial decision. It was to make the book more approachable, and not because we think home cooks can't use the second section. I think enthusiastic home cooks can cook from the entire book.

Do you see the blog in the same way, as being a tool for both professionals and home cooks to learn about food? Do you see it as a service to people? Or is the blog more about your exploration and creativity?
Kamozawa: I don't know if I would call it a service to people. We write the blog because we are passionate about what we do. We enjoy sharing our ideas with other people because it starts conversations, and we've learned a lot from the conversations that come out of it. I would say it's as much of a service to us as it is to the people who read the website.

Talbot: I was going to say the exact same thing. The blog's more of a service to us.

Talbot: It started out as kind of a notebook to record things, but it's become kind of more attuned to the world around us. It's really pushed us to learn. As writers, as cooks, as chefs, as photographers. I mean, if you look back, it shows a tremendous amount of growth in a very short period of time.

Kamozawa: Definitely because of the give and take with our audience.

So what's an average day for you guys like?
Kamozawa: One of the really great things about our business is that every day is a little bit different, so there really isn't such a thing as an average day. We're working on a few different projects right now. Our workshops, our individual workshops with chefs and we also take our workshops on the road. We're in a phase right now where we're working with other chefs and recipe testing for them, and helping them develop ideas. I guess a typical day for us is half in the kitchen and half on the computer, with photography kind of sprinkled throughout.

What chefs are you working with? Are you allowed to say?
Talbot: [laughs] Not right now!

Kamozawa: [laughs] It's kind of one of those things where we really enjoy working with other chefs, but they don't always want other people to know we're working with them.

Talbot: I would disagree.

Kamozawa: Okay, well, that doesn't surprise me at all. What do you think?

Talbot: Well, I think the ingredients drive it, but also our experiences and our interactions, which stem from the conversations you mentioned. But it's also driving along or walking along and seeing something and going "Oh, well, that reminds me of x, y or z." You know, going up to Rhode Island in the winter time and having clam chowder. Having the most delicious clam chowder that has the aroma of wood fire. Perhaps in the wintertime in Rhode Island, you have the wood fire going.

Talbot: So I think experience too. I think it's the interaction between the two of us. We have completely different outlooks. Our book has two different editors in the sense that Aki and myself both look at things differently. Our cutting room floor is pretty littered with crap, and that's really important too.

What kinds of foods are you excited about these days?

Talbot: Certainly Christmas cookies right now, but all things pasta. If you look on our website for the past month or so, every other post is pasta.

Kamozawa: I want to play with brisket. I've been trying to convince Alex that brisket at home is a good thing.

Talbot: It depends on the day!