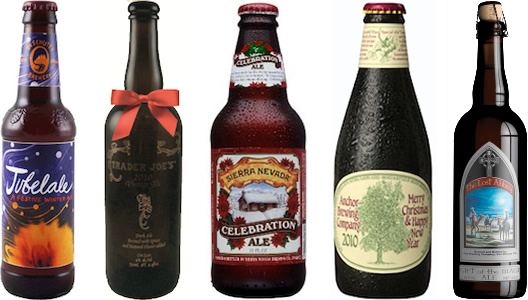 A catch-all category that refers to winter and holiday seasonals of varying styles, Christmas beers, generally speaking, hark back to medieval England, where 'wassail' and 'wassailing' with mulled ciders and ales was popular, even earning a shout out in Beowulf. They're typified by their big malty backbones, higher than usual alcohol contents, and varying degrees of bitterness and spiciness (from the addition of herbs, spices, and extra hops).

The typical Santa-sized oomph they pack can be nimbler than one might expect from beers pushing 8, 9, even 10% alcohol by volume, some redolent of ginger, cinnamon, honey, clove, orange peel, allspice, nutmeg, even frankincense and myrrh. There's even a beer served hot: Brasserie Beck, in Washington, D.C., serves La Dragonne (from the Swiss brewery Brasserie des Franches-Montagnes a.k.a. "BFM" at 120 degrees F in a steaming bucket of water with a large snifter for $45 "so that the aromas can be appreciated fully," says General Manager and Beer Sommelier Thor Cheston.

But not every Christmas beer is such a potpourri: "Spices are nice, but they aren't necessary," says Philadelphia beer writer Don Russell, who wrote a book

on Christmas beers and works under the moniker Joe Sixpack. Some beers achieve the desired spiciness through tweaks of yeasts and hops alone. Here, ten Christmas beers (in no particular order) that strike a merry balance:

2. The Bruery Three French Hens (10% ABV)
Brewer Patric Rue and his band of elves keeps coming up with well-made beers carefully attuned to the seasons. A Belgian style 'dubbel' aged partially in French Oak barrels, it can even age longer in the bottle to further smooth out its raisiny, slightly sweet profile. (thebruery.com)

3. Nøgne-Ø Winter Ale (8.5% ABV)
Akin to a strong English Porter, this hearty, dark brew out of Norway is redolent of cocoa, spruce, and smoke, with a fine carbonation and pleasing but not overpowering heft. (nogne-o.com)

5. Trader Joe's 2010 Vintage Ale (9.2% ABV)
TJ's has stepped up its attention to beer lately, even going so far as to commission house brews, some better than others. Among the very best to date is their annual holiday offering, which, at $4.99 per 750ml bottle, would be a steal even if it were only vaguely drinkable. But in fact this dark Belgian-style ale (made by Canadian craft brewer Unibroue, which is owned by Sapporo) earns high marks for its deep chocolate flavors, rocky head of beige foam, and citrusy tang. (traderjoes.com)

6. Sierra Nevada Celebration (6.8% ABV)
Thanks to its aggressive but pleasant hop profile and moderate (comparatively) alcohol level, the copper-hued, biscuity-tasting "Celly" is an American IPA by definition but by name and label a holiday offering. Truth be told, it's a year-round beer among craft beer cognoscenti. (sierranevada.com)

8. Three Floyds Alpha Clause (6% ABV)
Nearly opaque black and bursting with flavors of grassy hops, coffee, chocolate and brown sugar, this brew comes from Munster, Indiana, a hop skip and a jump from Chicago. Its name is at least partly a reference to alpha acids, the component of hop flowers' lupulin glands which impart bitterness and aroma to beer. (3floyds.com)

9. Lost Abbey Gift of the Magi (10% ABV)
Like the Three Kings, this massively flavorful golden brew comes packing frankincense and a small amount of myrrh. It's got some tartness and funk as well, making it one of the most unusual Christmas beers available. (lostabbey.com)

10. Jolly Pumpkin Noel de Calabaza (9% ABV)
Dexter, Michigan-based Brewer Ron Jeffries has earned a reputation as one of the United States' foremost makers of barrel-aged beers, which exhibit an incredible array of complex flavors from smoke to oak, sour, and everything in between. He describes his Christmas brew has having notes of sugar plums and "cashews betwixt rum-laden truffles," a fitting description. (jollypumpkin.com)