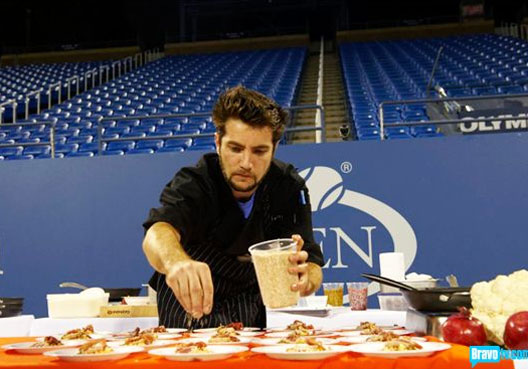 Last week's double elimination sent Gay Dale, Bespoke Stephen, and all their knives packing, and their departures have left our remaining chefs reeling from the shock of having exactly the sort of thing they knew would happen every few days happen. Luckily the producers let them cool down with a night "at the bar." Such a regular night at such a regular bar! It's so cool when you can find a really authentic local watering hole, one where they only seem to serve milky tea, crudites, and bread, where the light bulbs are all 150 watts and you are the only customers, and where the bartender's V-neck is as deep as the wine list you aren't allowed to order from.

Quickfire judge Tony Mantuano is the chef/owner of Spiaggia and a Top Chef Master. He, alongside his dear and close personal friend Swanson-brand Chicken Broth, introduces this week's challenge: make stuffing. Perfect! "More stuffin' for the huffin'." That's what I always say. (I like to sniff glue with big girls? I don't know.) This challenge is a topical one, as it is December, and we all know how traditional it is to cram cubes of bread inside the traditional Christmas ham. The twist: no knives, no kitchen tools, and $20,000 plus immunity are on the line. 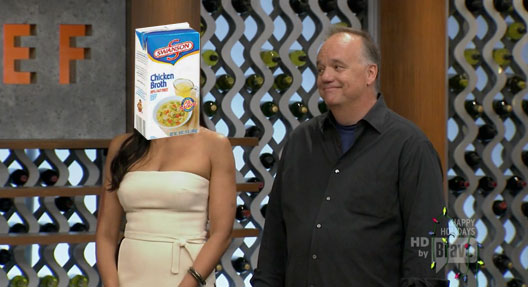 We find out that the combination of a shot at twenty grand and being deprived of kitchen tools is the exact formula for making all these chefs lose their fucking shit. They run around like a bunch of chickens with their heads cut off (not with a knife, but with the top of a pepper grinder, a la Jamie.) Fabio moans, "What-a? I'm-a going to crack potato with my head?" Yes! This is a lot of money. (Fabio does ingeniously grate cheese over the bars of a shelving unit, and he does not forget to tell everybody about it a TON.) Tre confesses that having two girls is expensive and this could really help. It took me a second to realize he was talking about his daughters because for a moment that is not what I thought he was talking about and I was impressed with his candor.

Carla says, "I'm going down the Thai quinoa salad road." Yuck. That is a gross road. "GPS, please suggest alternate route." But she's also the only one staying Zen amidst the chaos.

Casey says she feels like Tom Hanks in the movie Castaway. She says that not because working tool-free is akin cooking on a deserted island, but because this challenge is very difficult and soul-crushing and so is being married to Helen Hunt, I imagine. All the chefs have a grand old time telling each other what they are using as "spoons": a piece of bacon, lemongrass, a jar lid, etc. They laugh laugh laugh. Cool, you guys are finding solutions to problems, which is your job, on this television show. Relax.

Chef Tony picks his least favorites: Carla botched her Thai quinoa salad, and she amusingly called it "Undone-te Quinoa." (Instead of "al dente." Get it? It's pretty complicated.) Casey's Asian dish did not look at all like stuffing and was much closer to a plated appetizer, and Tiffani F. even admitted that her soy maple stuffing was too sweet. "Soy maple stuffing." Man, where'd she go wrong?

Marcel's stuffed quail and Tre's southwestern bread stuffing land on the top. Who will get the money and the immunity? I don't know about you guys, but this season it feels like the Bravo editors are even more overtly telegraphing the winners and losers with biographical asides early in the episodes. If somebody we haven't heard from before suddenly gets a two-minute clip about all the ways in which their struggle has been unique, they are going home. If we hear a heart-warming message as to why a win would be great for them personally, they win the challenge. Anyway, Tre and his two daughters win the challenge. He is very excited. Even Marcel can't help but smile at Tre's celebration.

This week's Elimination Challenge brings the chefs to the U.S. Open (the tennis one, not the golf one.) As anyone who follows tennis knows, tennis players are high-performance athletes, and they follow a very strict diet: it's all about healthy and high energy food, and also recreational cocaine use. The chefs first split into teams using the very normal colored-tennis-ball ethos.

Everyone on each team will prepare a dish, and then the teams will each pit a dish against the other one at a time. Whoever wins that head-to-head earns a point for their team. The first team to four points wins. Oh, it's just like tennis! Even hearing about these rules is as exciting as watching tennis. It is so strange that head-to-head cookoffs in giant stadiums aren't as popular as the game of tennis. The losing points on the losing team will face elimination.

Per usual, both Spike's hats and Angelo's pants are on too tight, and they come up with a very harebrained "strategy" that their teammates lazily go along with. For whatever reason, Spike and Angelo automatically assume the other team will come out "Blaising," (meaning with their best dish first), so they decide to put forth their WORST dish first. That way, the other team has wasted its best dish beating a dish that would have lost anyway? It is a weird plan that has a lot of dependencies and one that will almost certainly backfire.

Next, the teams shop at Whole Foods. Phew! I love watching them shop! "Oo, that Whole Foods is a tiny bit different than the one I sometimes shop at." Just fun stuff like that. Tre admits he's very conscious of what he puts in his body. He used to be fat! Is there anything more exciting than finding out that someone used to be fat? I really can't think of anything. It brings me endless joy. 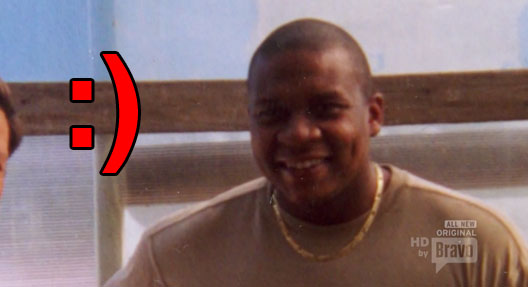 Everybody's got three hours to prep at the U.S. Open kitchen. Carla says she used to run, so I guess she understands tennis players and that is why she making African peanut stew. Antonia surprises no one: "I never played sports in high school. I smoked a lot of pot, and nothing else." Fabio is making gnocchi for the seventh time, which I have to admit is pretty ballin'. Angelo realizes the mackerel he bought is gross, so he tries to scam some salmon off Tre. Despite having immunity, Tre says no. Tiffany D. is nicer and shaves him off some tuna. 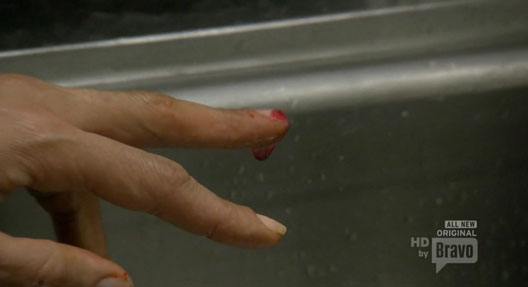 Carla looks away from her station for one moment and cuts half her finger nail off. It is bleeding! They want her to go to a hospital. But no no no, Carla's got too much to do, and like a real chef she bandages it up and soldiers on. Remember when Jamie didn't do that? Everyone remembers that, because Jamie, with every breath she takes, never lets you forget for a second that she is the worst. 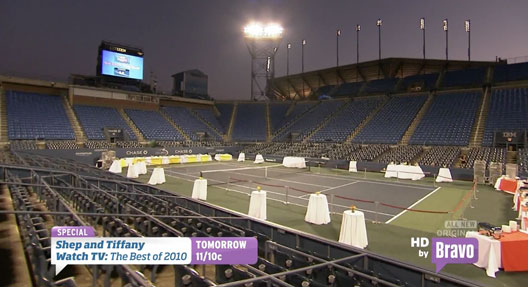 But that is not the only way in which Jamie is terrible. The chefs make their way onto the court and see they will be cooking for the judges alongside Taylor Dent, a tennis player whom I have never heard of. Padma says, "Time for match play" and even the tablecloths roll their eyes. Here, the Yellow Team's strategy falls apart completely. When they see it is Fabio and not Blais (the Orange Team) fielding first, they doubt themselves. Jamie's chick peas still aren't cooked, so it makes sense for her dish, being the worst, to go first. But she refuses. Instead, Casey sends her pork loin and faro salad. Spike is confused! But his plan! But his hat!

It's a shame that this head-to-head style of play is mired in annoying tennis talk, because it is actually an extremely compelling way to watch food be judged. I suppose in the end it's slightly less fair for the players, but I of course don't care about that. Fabio's supernaturally light gnocchi beats Casey's heavy plate of food, and already they are down 15-0. (Because of tennis scoring. Something something love.) But they bounce back with Tiffani F.'s sashimi over Dale's dumplings, and Angelo's smoked tuna spoon thing over Marcel's tuna and couscous.

After that though, the Orange Team stops losing. Antonia's diver sea scallop beats Tiffany D.'s spiced tuna, and Blais's lamb beats Spike's shrimp soup. It's match point, and only Immune Tre and Jamie are left up on the Yellow Team. Are Jamie's beans ready? Who cares. She sort of hides. What a nightmare. Tre lets Angelo cook his salmon for him, and Angelo messes it up. Tre's salmon loses to Carla's peanut stew. The Orange Team wins, and Jamie never even got a chance to serve. The Orange Team is excited. 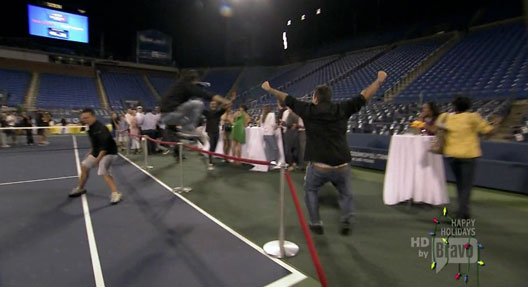 Back in the Coat Closet, the chefs take a break to dance. Mike Isabella loves to get people dancing.

The winning points on the winning team are called before the judges: Carla, Richard, Fabio and Antonia. The judges call today's challenge some of the best food they've ever been served. Thanks to her wonderful stew and sponsorship by Gelato Vineyards, Carla wins a trip to Italy. She is so excited! She promises to eat her way around. Very smart. That is what I would do. 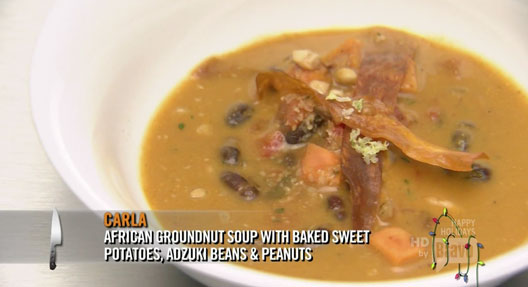 The losing points (Casey, Tiffany D., Tre and Spike) faces the judges. Tre's salmon was a little overdone and a little oily, but he's got immunity, so he keeps quiet. The seasoning was off on Tiffany's tuna, and she accepts it gracefully. Casey gets into with the judges over whether her food was heavy or not. They say there was too much protein, not enough salad. Her point is that it only looked heavy. Be quiet, they didn't like it. Do you think you're going to argue yourself back on top?

Spike complains about how his team's strategy fell apart. It certainly did, because here you four are on the bottom, and Jamie isn't anywhere to be found. Damn you, Jamie. Spike's also pissed that he let Angelo "help" his dish by putting yuzu in the bottom of the bowl. Did that sweetness ruin the balance of the soup? Maybe, but ultimately it's Spike and Spike alone's bland shrimp that messed it up. Whether or not Angelo sabotaged the dish, it was Spike's job to step up and stop it from happening. He didn't. And he's going home, earlier than he'd like. "Mendelsohn out." Don't say that.