Jacques Torres Fishes in the Night

Share All sharing options for: Jacques Torres Fishes in the Night 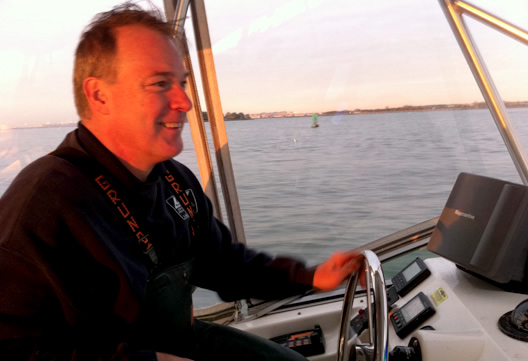 Few are the commuters leaving Manhattan at the Vesey Street water ferry terminal at 6 AM on a cold winter morning. Many are those who are disgorged on the island, ties already cinched, gripping briefcases like ancestral shields. I was among those revanchists fleeing. I was headed to Liberty State Park in Jersey City where master chocolatier Jacques Torres docks his fishing boat. "It's only good fishing when the tide is either coming in or going out," explains Torres when I finally find him on the dark and desolate dock. Three-quarters of him is covered in rubber waders. "Otherwise," he says, "when I show up to work, I smell like fish." Work is, of course, the four high-end chocolate boutiques M. Torres runs in the Manhattan.

Torres spends the majority of his nights in the small bedroom of this 39' foot fishing boat with the inherited name kept from the last owner's, The Last Boat, written across its stern. "I'm from Provence," he explains, "I'm used to the sea and the land. I need to be outside." Inside the cramped living room, on a table a worn copy of Eldridge Tide and Pilot Book 2010

sits next to an iPad which Torres uses to look up tide charts. There are some knives magnetically held to a strip and, of course, a coffee machine.

We head up a ladder to the cockpit. In the darkness, Torres' face is lit blue from the radar screen from below, like some sort of Red October villain. What for us land-lubbers is a uniform cartographic wasteland is, on this map, alive with dashes, dots, and channels. "The East River is just a strait," informs Torres as we motor past the Kill van Kull into the mouth of the New York Bay, the Hudson River on our left and the East River on our right. Heading out to a point near the Statue of Liberty — in a triangulated sweet spot for Striped Bass between the Statue, Ellis Island and Red Hook — the towers of the Financial District are still dimly lit. The sun has not yet risen. "I don't sleep much," says Torres of our predawn jaunt, "about four or five hours a night." For all that, Torres doesn't seem sleepy as he prepares the rods. In a bucket near the back of the boat, a dozen or so eels squirm slimily. "We're very secretive about where we get our eels," Torres says, "they aren't easy to find." Grabbing one with a towel, Torres punctures the squirming eel — whose day is about to get exponentially worse — through the chin. Then he punctures mine likewise onto the hook. We plop our rods over and let the reels spin.

Torres is an affable yet opinionated man. He's driven in a quiet way, a motor more reserved than the mercurial passion that animates many chefs. At 26, Torres became the youngest patissier to win a Meilleur Ouvrier de France, the honor the pursuit of which was captured in the Chris Hegedus and DA Pennebaker documentary Kings of Pastry. Torres saw the film — and in fact was in the film — but is not a fan. "It doesn't show the entire story of the prize. For instance," he says," as his line drags unnibbled along the riverbed, "there are three types of judges in the M.O.F., those who taste the food, those who observe the process, and those who judge the appearance. I don't think that was very clear."

We've done three drifts but came up fishless. We decided to try our hand at blackfish, who tend to gather near the Red Hook shore. As we motor past the warehouses and rocky shoals, we see a suspicious boat, hauling in net from the water. "What are they doing?" Torres wondered, not without a hint of irritation and alarm. "It's definitely an industrial crew." Torres takes to the radio. "Poisedon III, do you copy?" There's no response. We circle the boat. The fishermen eye us like prairie dogs, weary and not very friendly. Torres reacts less with anger than bafflement. "Poisedon III," he says again into the radio. Bleeps, bloops and crackle reply. [Ed Note: Windex tears roll down the robot's face.]

We leave them to it and head over to the trash barges. Fish like to hang out near their hulls. It's choppy and Torres mans the controls as I cast in vain. But he can't hold the boat steady in the chop. So close to the barges, a collision is dangerously plausible. The sun has risen and the tide has come in. If we were ever going to catch fish, we would have caught them. We stow our rods and head back to the dock. "I promise," says Torres, "next time, you will catch a fish." Nimbly for a man his age and wearing waders, Torres hops off the boat to tie up. The eels writhe in a bucket. The tide has come in and the sun also rises.