Top Chef All-Stars Episode 1: How Do I Love Thee? Let Me Count the Blais

Share All sharing options for: Top Chef All-Stars Episode 1: How Do I Love Thee? Let Me Count the Blais

Hi everybody! We are back with an extra special edition of Top Chef. Very exciting! Why is it extra special? The chefs on this eighth season of Top Chef are all former contestants, or as I like to call them, MY OLD FRIENDS. (Like how with old friends you sort of care about them a lot for three months and show it by making fun of them publicly and then you never once think of them ever again.)

This welcome change-up means no more struggling the first six weeks to keep track of everyone's names. "During the Quickfire, Moon Face accidentally dropped Lip Ring's lobster and then Rough Childhood got mad at Casual Misogynist for using all the marjoram and then 17 other people did something or other and it was very exhausting to even watch much less write about." I can't tell you how relieved I am. Welcome to the first episode of Top Chef Old Friends! Note how I am not calling it Top Chef All Stars. These people are not all stars. Like, as of yesterday I could not have picked Tiffany F. and Elia out of a police lineup if you put a gun to my back. (Why are the police just letting you put a gun to my back?)

The eighteen (!) chefpetitors greet one another at their new house in New York City AKA The Top Apple. If you'd like your memory refreshed as to exactly who all is back for this season, do go to Bravo's website. That's why it's there. That's why it's your homepage. (If your browser is anything like mine, just click Home and you'll be taken to Bravo.com. "It's not a house, it's a home." That's what I say to people who use my computer.) For the most part, people have not changed. Mostly they are a bit more well-rounded. (What I'm saying is it looks like a lot of chefs got rounder. They had second helpings of Top Scallops.) Marcel is still annoying. He calls Tre a beast. Wait a second, Marcel: Kenny was the beast. Are you being racist? Let's just say probably.

There are two Tiffanies and two Dales. Only Dale T still has his faux hawk. Fan favorite Jen Carroll is back. (I am kidding. What a bummer she is. Even when she's saying something upbeat I want to frown and say, "I'm sorry." She always looks like she just realized she lost her wallet.) Carla is still a Fraggle. Stephen Asprinio came ready to cook with his finest pocket watch chain. Is he the new spokesman for Monopoly? 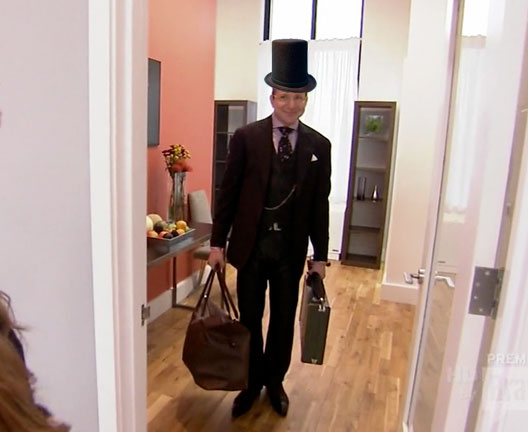 Some of MY favorites are back too. Harriet the Angelo is here to gather more intel. I can't believe his Russian bride let him out of the house! (They actually broke off their engagement NO DOY.) Mike Isabella is all teeth and smiles and fun times, and Father Fabio Sarducci's accent remains adorable. Plus, what is there to say about Richard Blais? He is the best. Literally #1. He is my Blaison D'Etre. 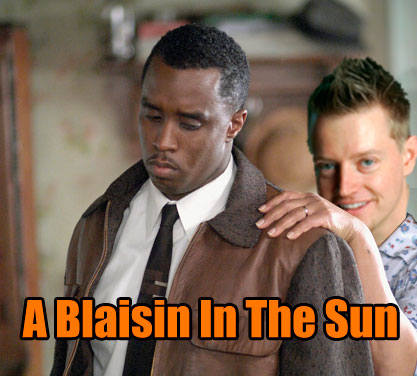 (If you are not a fan of puns on Richard Blais's name, I recommend you unplug your computer for the next few months. Unplug it then put it in the sink.)

The chefs file into the kitchen and greet Padma and Tom, just like old times. This year's Top Chef will get not 100 but 200 thousand dollars for winning. That's a lot of money! Marcel is shocked. Think of how many electric beard shapers he could buy with that much money. The first Quickfire of the season, granting the winner immunity, asks the chefs from each season to work as a team and create a dish that best represents their season's city.

Everyone gets worked up to show how their season was the best. I understand that impulse, but multiple chefs start talking about how people come up to them on the streets "all the time" and tell them how their season was the best, or had the toughest competition, or whatever. Really? People are doing that "on the streets?" "Hey, Dale, sorry to bother you as you are I'm sure a very busy famous person, but I just wanted to tell you that I definitely thought Top Chef Miami was the hardest. It seemed super hard. I watch all the seasons and some just aren't as hard." Cool street people. 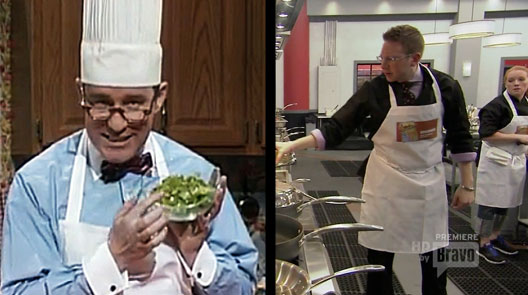 Oh, and if you forgot for a second that Richard Blais is the king: he wastes no time getting some nitrogen up in there to make some mustard ice cream? Whatever, give this guy a genius grant. 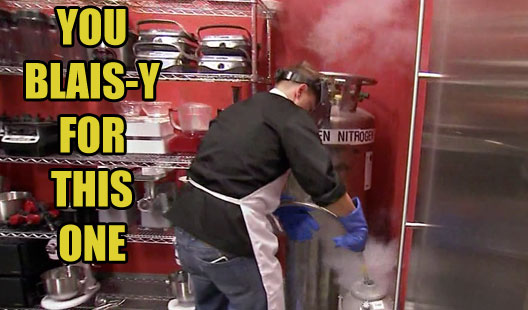 Maybe everybody's a bit rusty, but they work together well and seem happy to be back in a television kitchen. As Mike and Jen finish their bucatini as the timer buzzes, he goes in for a slap-pound but only gets the slap. Awkward.

Tom breaks the bad news first. The shrimps on Marcel and Elia's LA tacos were bland and the weird-ass apple tortilla was too thin. Tiffany F. and Stephen need to go easy on the raw garlic. The New York chefs served three dishes and batted .333, and DC's crab cake essence rockfish thing was very salty.

On top are Miami's pork thing, Chicago's deconstructed hot dog and Vegas' homemade lobster bucatini. Mike is very smiley and proud of his homemade pasta! But Tom declares Spike, Antonia, Blais and Dale T. the winners. They get immunity. Mike swears a lot.

Next up there is a surprise. Always a surprise! It would be surprising if this show did not have a surprise for once. Each chef is presented with a silver serving tray. Fabio: "You-a guys bought us a-dinner. How-a nice. Meatball." Inside the trays? The ingredients that sent each contestant home. How very devilish! This week's Elimination Challenge tasks the chefs to try and make a great version of their losing dish, one that doesn't stray far from the original. (Just get it right this time.) They've got three hours to prep then two hours tomorrow at the Russian Tea Room. Tony Bourdain and Gail Simmons will be their guest judges.

The chefs survey their ingredients and are confronted with all sorts of past blasts: Dale T.'s horrific butterscotch miso scallops, Spike's frozen scallops. Isabella is stuck doing an all vegetable dish again and he isn't pleased. This is the face he makes when he tastes one of the leeks he's cooking. 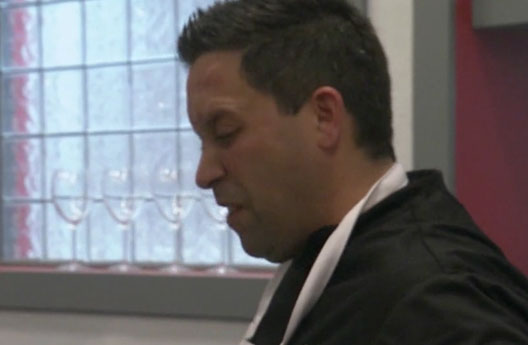 Stephen runs around a bit lost. Tre says, "Stephen didn't come out of the trenches. He came out of the Macy's Day Parade." Ya burnt, Stephen! Are you wearing swimmies because YOU A FLOAT!

Blais calmly takes in everyone in the kitchen. The only challenger he sees is Angelo. "He's spiked my curiosity." I wonder if the spike is mutual? We shall see.

Tom arrives in the kitchen with another twist: they will be split into two groups and each group will taste the others' food along with the judges. As the first team heads out to taste, we learn that there is a video feed in the kitchen. The chefs can hear the comments as others taste their food. Um, that seems insanely nerve-wracking and, like, an actual nightmare of mine. "Oh cool, lubricated by wine and television cameras, my competition is going to offer up self-serving criticism of something I've created. Neat this seems great let me listen!"

While the judges and chefs have surprisingly nice words for many of the dishes, there are also lots of awkward moments. Eesh. Bourdain tears into Fabio's pasta served on parchment paper. He is right; it does look like inside-out animal guts. And pasta on paper? It's all very weird, and Fabio is extremely sensitive about it. He calls out Bourdain twice and it's tense both times. Has Fabio lost his mojo? He used to be so cocky and fun-loving, now he's all scared and humorless. "Where-a is-a da Fabio I loved, whose grandmother would-a tell him a-crazy untranslatable idioms?" I miss that guy. He goes on a very odd rant about how cooking is serious business and no one is allowed to make fun of him. Um, cool. Because nobody ever wants to pick on a guy who whines, "nobody makes fun of me!"

Back in the Sulk Closet, Padma calls in this challenge's winners: Spike, Jamie, Richard, and Angelo. "Everybody who didn't continue plating their dishes after the timer went off, please step forward. Not so fast, Blais." Richard gets called out for cheating and is disqualified from winning and sent back back to the Closet. He is mad, and Dale T. calls bullshit. "Richard's dish was clearly the best." (Richard earlier said overhearing the positive comments on his food while it was served was the most gratifying moment of his professional career. It warmed my heart.)

With Richard out of contention, Angelo takes home this week's top prize: 10,000 bucks. "Buy my wife, please." Angelo calls in the losers: Stephen, Fabio, and Elia. Stephen is a little baffled. "My dishes were wonderful, and clearly rimless eyewear is the classiest type of eyewear." Fabio barks at Bourdain about his dish getting made fun of. Maybe his grandmother's face looks exactly like that dish, and that is why he is so sensitive? Elia cannot believe her weird steamed fish was raw, but it was. "Don't eliminate me. I have a lot more to do." Well, do it somewhere else, because you and your knives are going home. 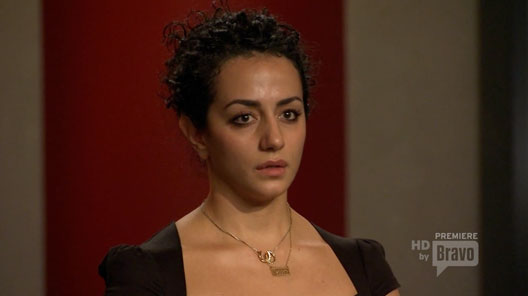 And we're off! What a season this is going to be. I am sorry Elia is so sad but she is not one of my OLD FRIENDS so I will not miss her. Now it's just counting the days until Blais wins it all. I cannot wait.