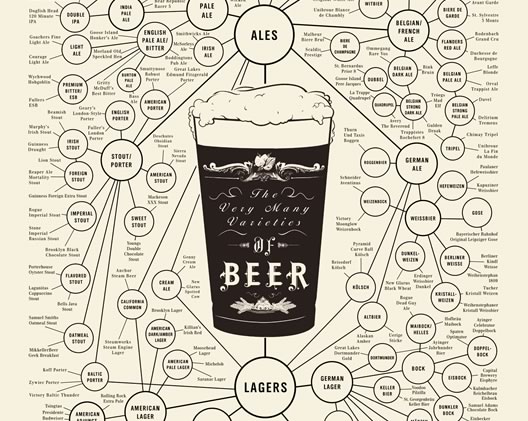 Now that I've covered absurdly expensive or rare craft beers to hoard as if they were the Crown Jewels, and now that so many of us have surely neglected to do any Christmas shopping whatsoever, it's time for a more practical list of gift ideas for the craft beer lover in your life.

Brooklyn's Pop Chart Labs (above) makes ingenious infographics for T-shirts and posters, none more engrossing than than this, on The Very Many Varieties of Beer ($25).

Whole Foods has embraced craft beer wholeheartedly: there are 225 beer-selling stores in 38 states, many of them "flagship" stores with over 800—you read correctly, that's eight hundred—varieties of craft beer from the U.S. and abroad. Rather than try to pick something out, get your beer loving friend a gift card and let them go to town.

For the truly devoted, there's always The Kegerator, a device which allows its owner to serve beer on draught like a pro. Here's one for under $500 which will look right at home next to the Sub-Zero.

Drinking beer from a red plastic cup is fine...when you're drinking schwaggy keg beer on campus at 2am. But once you've stepped up in the beer appreciation department, a bit of comportment goes a long way. The Reidel Stemmed Pilsner glass is the best vessel I've found for appreciating bigger, more alcoholic beers like Double IPAs, Belgian Tripels, and Imperial Stouts ($29 for two).

Michael Jackson was a Yorkshire-bred writer and a gentleman who died too young, in late 2007, at the age of 65. A friend and mentor to me and to many others, he's credited with giving meaning to the very phrase 'beer writer', having penned 16 books in all covering beer and whisky with the care and scholarship of a monk—and the thirst of a lion. Among his very best works is the 520-page paean to Europe's most interesting beer culture, Great Beers of Belgium

, long out of print but recently been reissued (about $25, via Amazon).

When he's not brewing Brooklyn Brewery's brewmaster Garrett Oliver is hard at work editing The Oxford Companion to Beer, which won't be out until sometime next year. He's also the author of The Brewmaster's Table

(Ecco, 2003) a masterly written, 384-page treatise on pairing beer and food that is a must-have for any self-respecting lover of the two (from $10 in paperback; $60 hardcover). Ideally, the recipient will read it while sipping his latest masterpiece, Sorachi Ace beer, a delicious saison made with Japanese hops.

($19.95), the time is now. The 89' film, released last year, depicts Dogfish Head's Sam Calagione and a host of other American craft beer upstarts as they take on the big American brewers and distributors, all for the love of beer.

Patagonia has not only created some of the best catalogs to stoke a person's wanderlust as long as I can remember, they have also come up with something truly ingenious: the belt buckle bottle opener. Click, just like that!

For the artistically inclined beer lover, this stainless-steel bottle opener sold by the MoMA store is sure to warm the cockles of their heart.

The best way to learn about craft beer is to make it yourself. Brooklyn's own homebrew supply store has put together the ultimate starter kit, for $395. It takes extra room, lots of time, deep reserves of patience, and a bit more money (for the ingredients), but all in all brewing is a great way to while away the cold winter weekend days and nights. Even better, giving this gift entitles you to a lot of free beer.