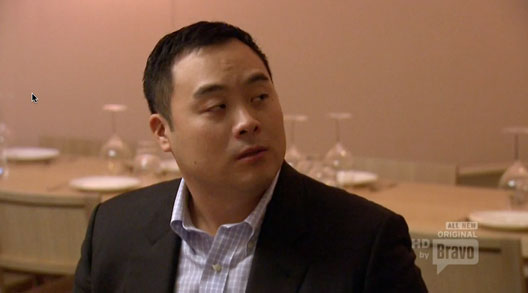 Everyone is reeling from last week's abrupt dismissal of bat-shit Jen, and when I say 'reeling,' I mean we move past it within seconds. Where are the chefs living this season, by the way? No fancy Greenpoint condo? This season is not spending much time documenting how they make egg sandwiches and who likes what in their coffee. What a shame!

I think we can all agree the two most fascinating portions of Top Chef historically have been seeing what grown adults consider to be acceptable pajamas to wear on television, and of course scrambling for ingredients in a Whole Foods. "Oo, they are having trouble finding the right rice and OH GEEZ now they're over budget. My heart's going to explode!" It's called good television, people. Look it up, in the book I'm writing, called "Filming Trips To Grocery Stores Is Never Interesting" (out this fall from Harper Collins). 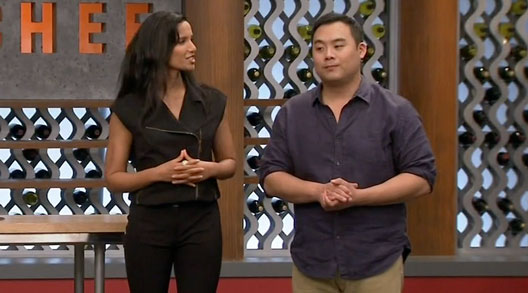 The chefs file into the kitchen for their Quickfire. Hey, there's David Chang, chef and owner of the Momofuku restaurants. Oh, also Má Pêche. They really make a point to keep mentioning Má Pêche. Sure. #1 hot restaurant on West 56th Street, the one Chang is known for. "The great thing about living in Midtown West is all the hip dining." The only people who live in that neighborhood are great aunts and Andrew WK. But, cool. 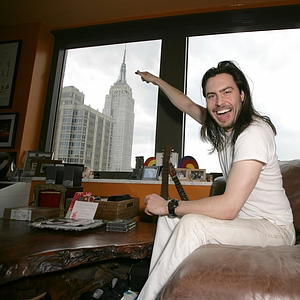 Chang will be judging everybody's mise en place by challenging them to prep three ingredients and then use them in a dish. The chefs are split into teams of four based on how they randomly filed into the kitchen. Fabio has to work with Angelo. "He wears his pants a little too tight for me." Fabio, aren't MOST people's pants a little too tight for you now? (That is a joke about Fabio has not forgotten to eat any of the meatballs.) Spike, like everyone else, is not excited to work with Stephen. "Stephen will be able to open a bottle of wine for us." Meow! It is becoming a recurring theme that Stephen has spent a few years away from behind the stove.

The first team to complete their prep to Chang's liking gets to hit the Staples Easy button and start the 15-minute clock. That is not much time to make a dish, especially if they aren't even finished prepping. Marcel is giggling, because he found a new way to hack the lamb. "This is so much fun! Is anyone else having so much fun?" You are almost 30 years old, Marcel. Relax. Fabio slams his cutting board on the garlic and yells, "I'm beautiful!" People do things with artichokes.

The Green Team (Angelo, Tiffany D., Mike, and Fabio) finish first, out way ahead, and slam on the button. The other teams scramble to catch up. Chang is needling Spike on his garlic chopping, and Spike gets so anxious his hat puts on a hat. Two of the teams have so little time they go with carpaccio. Blais takes control of his team's lamb. "There's no time for democracy." I believe that is a Che Guevara quote.

Chang tastes all the finished dishes. Oh, also, the winners each get five thousand dollars. Chang says nice job to the Blue Team and makes Blais's heart flutter. The Green Team is cocky. Mike wants five thousand bucks in his pocket. His talk is big, but he drinks his water nervously. So thirsty!

Chef Chang's least favorites were the Red Team's (Antonia, Dale L., Casey, and Jamie), and wow, big surprise, the Green Team. But they finished their prep first and had the most time! Angelo makes a funny embarrassed face. 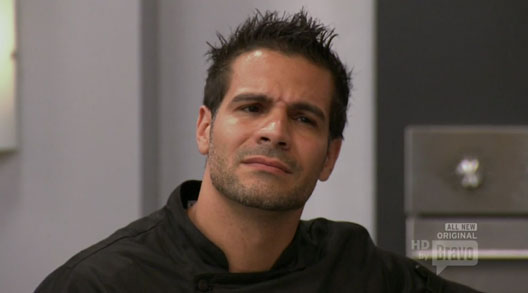 The money and the Quickfire win go to the Blue Team, though. Blais took the lead here and earned his team's trust with this dish. 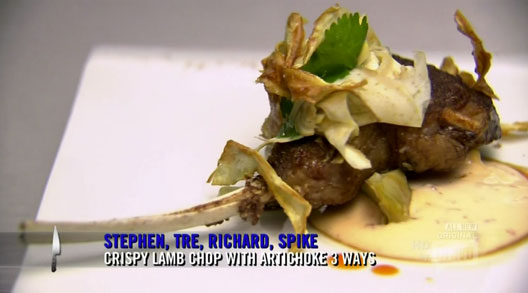 The randomly assigned color teams will persist for the Elimination Challenge, which sends each team to a different chef's top restaurant to cook something in that chef's style. And then that chef will judge! This is daunting. And a double elimination, no less. As hinted earlier, the teams will head to Chang's Má Pêche, Michael White's Marea, David Burke's Townhouse, or Wylie Dufresne's WD-50.

Some of the assignments work out for the chefs. Some don't. Marcel salivates at the thought of impressing Dufresne, Gay Dale thinks his playful American cooking is a great match for David Burke, and Angelo goes glassy eyed when he talks about Chang's French/Vietnamese food. "It's straight up yummy." Ew. That's a terrible sentence. Is that sentence on your mailorderbridefinder.com profile? Angelo smells all the food. 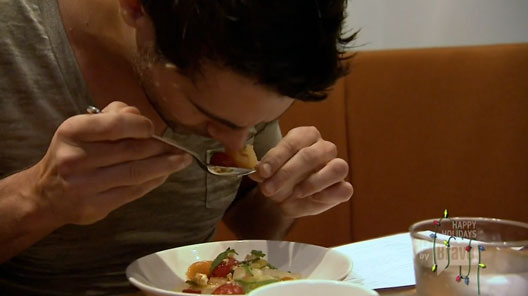 Fabio feels out of his depth at Má Pêche. I guess he only knows how to make pasta. I was a major booster of Fabio's in his last season, but is it possible he's not that great of a cook? Like, everybody jokes that he can only do Italian, but what cuisine besides Italian *can* he handle, if French and Vietnamese flavors are so nuts? Here, cook this, Fab. 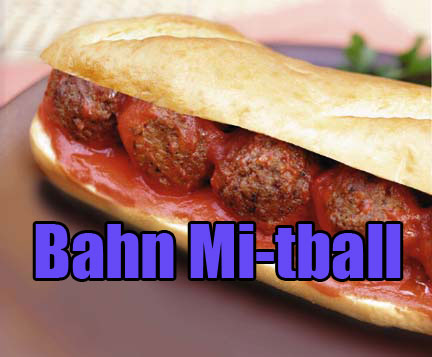 Everybody gets to eat in the restaurants before they cook. There is some tension. Tiffany D. thinks Angelo should shut up. Stephen, who is as hard as a rock at his favorite restaurant Marea, condescends to Tre about sea urchin. Blais worries he doesn't have the restraint to tackle Michael White's cooking at Marea. And Carla's style could not be more different than WD-50. Good luck everybody!

They cook. They use ingredients and stuff! Then dishes are served. Blais makes a big show of not going over time. 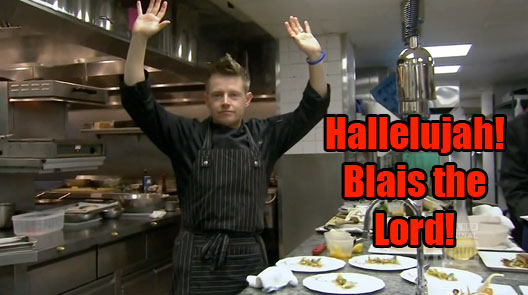 Guys, there are four different dining portions with 16 individual dishes. Judges rush between restaurants in cabs. I am not going to break them all down. That is boring for me to write as well as you to read. Here are some bullet points, which everyone agrees are the most advanced form of literature:

· Spike should not have called his caponata a caponata.
· Stephen's dish tastes like a head shop.
· Angelo has very many balls and put white chocolate on his fish dish.
· David Chang seems, per usual, uncomfortable on television but devoted to getting the job done.
· Dale T. chose to not play Wylie's game, but to instead be inspired by him.
· Gay Dale has popcorn in his food?
· Jamie says she's got smoke on her plate but nobody tastes smoke.
· Everybody agrees "scalibut" is the most clever thing in the world to call halibut shaped like a scallop.
· Fab's dish seems like a great chef got lost int he woods.

Sorry that isn't funnier! But you guys want FACTS, right? I write these up like a police report. (Also because I will lie about things in my Top Chef recaps if it will protect a fellow cop.) The judges call in their favorites: Dale T., Angelo, Antonia, and Tre. The winner gets a six-night trip to New Zealand? Only nights. Weird. The winner, with his egg yolk dumpling in a buttered-toast-tasting broth is Dale T. He is very excited! It's his first win, I think? I'll check my spreadsheet I don't keep. Later. 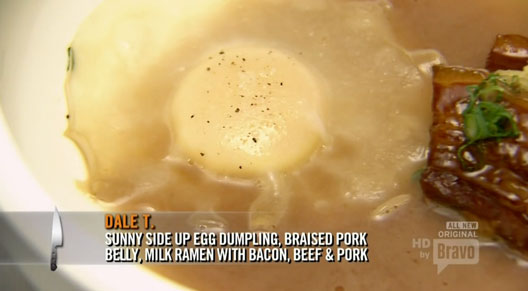 Dale calls in Stephen, Tiffany F., Dale L. and Fabio. "Don't pull a Jen." Haha remember when she flipped out and spat curses at a producer offscreen? Good times. Bourdain is much kinder with his criticism of Fabio this time around. Fab is like a painter who put too much on the canvas, and Fabio concedes Bourdain is right. Dale thought that Townhouse was food with jazz hands, which is probably his first problem? Does jazz hands meaning putting meat in the middle of a gross breakfast dish? Stephen used too many aromatics and also is obsessed with fashion. That sends them both packing.

I will miss Stephen, because he is very silly. I will appreciate not having to specify which Dale I'm talking about. Fabio will miss pinching their ears and missing. 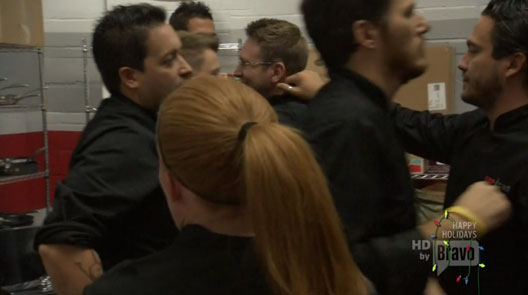