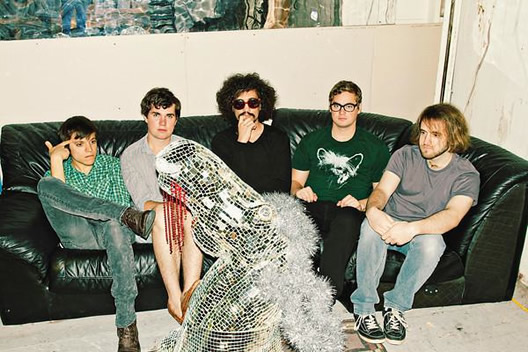 This time last year, Surfer Blood was wrangling Facebook fans to help make a video for their popular single "Swim," running through East Village laundromats and crowdsurfing in small Brooklyn clubs. Just a few months later they kicked off endless summer tours with nearly nine shows at South By Southwest. The Florida natives have received endless praise from indie outlets like Pitchfork and Stereogum and just returned from a European tour with Interpol. I caught up with lead singer/guitarist, JP Pitts, while in New York to talk veganism and home-made hangover cures.

What's your favorite city to tour in because of the food?
I like London for all the curry places, San Francisco for all the burrito places, and Osaka for that stir fry cooking on a grill: teppanyaki. It's a tough call.

Any particular burrito places you dig in San Francisco?
There's this place called Gordo's and I think the main reason I like it is because it's right down the street from one of my best friend's houses who I usually end up staying with... so ya know... convenience! I don't have a regular order there, I like to change it up. As long as it's really spicy and vegetarian-friendly.

Speaking of vegetarian, I heard a few of you recently became vegan/vegetarians?
Yeah, I'm doing the vegetarian thing now because it was just so hard being overseas and eating vegan, especially in a place like Japan. Just having to avoid animal products in the food when it's such a big part of the cooking. But Tom (the guitarist) has been a vegan for about two years now so everyone else in the band is vegetarian except for our drummer.

What was your inspiration for saying no to meat?
Well I haven't eaten meat for a while and I figured it was just healthier and easy enough to cut the rest out.

What are some of your fave vegan places you've eaten at in the US?
Oddly enough this place in Bloomington, Indiana that's really really good called Roots. There are actually a lot of places, there's this good place in West Palm Beach, Florida — where we're from — called Darbster that just opened. They just have so many raw things on the menu and it's all really good and it's stuff that like only two people in the world know how to make.

As Florida natives, what were your go-to local dishes growing up?
Well yeah I love seafood. And there's a lot of really good Cuban food in South Florida. I loved this restaurant called Don Ramon's in West Palm Beach, there are two of them. Their breaded steak was always really good, their Ropa Vieja was really good. So yeah, that was one of my favorite haunts growing up. I used to go there before soccer practice in high school and eat way too much food then feel like shit the entire practice.

So outside of vegan/vegetarianism, what are your main dining requirements on tour?
I think finding vegan food in every city has always been something we've done, even back before most of us in the band were vegetarian. I've spent so many hours of my time scouting out places to go and try. On our first few tours we'd do the fast food thing like Taco Bell because we were all completely broke, it's hard to eat well when you don't have any money. But we haven't done that in a long time. We all just really like food so we try to find the best places and we don't mind hopping in a cab and driving a while to find something good.

How do you guys go about scouting out good places?
Tom is really good with the fans and Twitter, so he'll tweet at people and get recommendations. I have an UrbanSpoon app on my phone and so that usually works pretty well.

Do you guys have any particular foods you feel pretty strongly about when trying new places?
I think Thai food probably. Because there's really great Thai food and there's really awful Thai food. Panang Curry is one of my favorite dishes on the planet and I get it every time we go to a Thai restaurant — I've had it in all different shapes, sizes, and colors — and if it's not good I get really bummed. I think the best Panang Curry I've ever had is actually at this place in West Palm Beach called The Spice, and to date, I still haven't been able to find a better place.

While we're talking fave dishes, can you describe your best food experience on tour?
Kevin (the bassist) says that his best food experience on tour was when we went to this place in Prague on the outskirts of town and he had sauerkraut pancakes. And it was a good thing the food was good because the people that worked at the restaurant were really, really mean. Tom and Marcos (the drummer) came back when we were finishing the meal and getting the check and the waiters were like you can't sit down you have to stand up until everyone is finished. So that was weird and mean, otherwise though it was good.

You guys have had your fair share of the usual tour mishaps — broken down vans, no places to stay, etc. Any major food mishaps along the way?
Yeah we just got back from a tour with Interpol in Europe and some of the catering in Italy made me violently ill for about 24 hours. It was a huge bummer, I was up on stage wanting to die and go home.

You guys also have a reputation as being pretty hard parters. What meal is your go-to hangover cure?
I like to eat sauteed spinach, collard greens, or black-eyed peas when I'm feeling bad. They're nice and green and good for you but they're also comfort foods, they were all things that my mom cooked for me when I was growing up.

Okay so now for our lightning round!

Check out their video for their debut single, "Swim"