This Year, Give the Gift of Really, Really Expensive Beer

Share All sharing options for: This Year, Give the Gift of Really, Really Expensive Beer 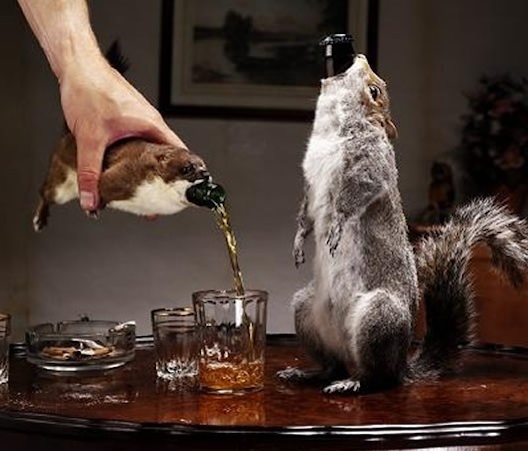 Think the craft beer lover in your life has everything? Well, unless they own a bottle of each of the following beers, they couldn't possibly: presenting the most expensive beers ever sold. Collecting rare and vintage beers is for the most hard-core beer fans, who run the gamut from casual hoarders to nattily-attired collectors to a handful of real wingnuts. Below, their Holy Grails.

Antarctic Nail Ale, $800
A single bottle of Antarctic Nail Ale, made by Nail Brewing Co. of Fremantle, Australia, was sold for $800 at a charity auction last month. Why so spendy? A portion of the water used was melted Antarctic Sea ice harvested by the Sea Shepherd Conservation Society (of Whale Wars fame). Call it the Moby Dick of publicity stunts.

Samuel Adams Utopias, $165 - 700
Every other year Boston Beer Co. (now America's largest domestic brewery, since Anheuser Busch was sold to InBev) releases a wood-barrel aged brew in individually numbered 24 oz. ceramic cisterns shaped like brewing kettles. It's meant to be consumed two ounces at a time, from a snifter. The 2009 version (21.5% alcohol) contains a nutty, caramelly elixir-like blend of ales aged up to 16 years, with accents from Portuguese muscatel finishing casks, as well as sherry, brandy and Cognac casks which color and flavor the beer. Former vintages can fetch upwards of $700 online.

Carlsberg Vintage 3, around $400
A 15% ABV (alcohol by volume) pale barley wine beer aged in French Côte d’Or barrels, some 1,000 bottles were brewed, labeled with local artists' work, and aggressively marketed as "the most exclusive beer in the world", which, to be honest, does little to add to its appeal from a committed American craft beer lover's perspective.

La Vieille Bon Secourts, $1,000
12 liters of brew: London restaurant Belgo has sold about three of these behemoths, which take multiple adults to move and pour and contain an 8% Belgian brew described as having characteristics of apricot, caramel, and aniseed. There's one left. Who's got the next round?

Brewdog's The End of History, $770
A Scottish microbrewery's blatant (if incredibly effective) PR stunt, this 55% Belgian-style blonde ale was sold encased in the body of a taxidermied squirrel (roadkill, not killed for the beer, the brewery assures). Only 11 bottles were released, and all were sold.

Tutankhamun Ale, $7,686
A Cambridge archaeobotanist named Delwen Samuel and brewers from Scottish & Newcastle collaborated after Samuel discovered well-preserved ancient brewing equipment and spent grains in the Sun Temple of Queen Nefertiti in the mid-1990s. They used emmer wheat to recreate a replica recipe, and 1000 bottles were sold; the first fetched $7,686 and others fetched up to $500 at auction, with an initial asking price of around $50 - $75.