Share All sharing options for: Oberhofer: Ice Cream Snobbery and the Infinite Sadness 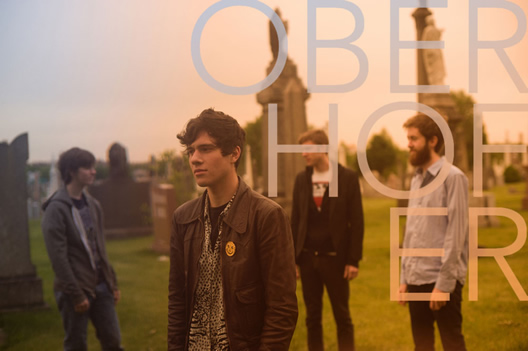 If you don't already know Brooklyn's Oberhofer, get used to the name because you'll be hearing a lot more from this indie-pop heartthrob. Brad Oberhofer is a multi-instrumentalist from Tacoma, Washington, and regular in the Brooklyn independent music scene. Oberhofer took a DIY approach to his music, recording pop songs in his basement and sending them out to popular music blogs. In the last year, the 20-year-old has garnered a strong following online, toured the country with a full band and even landed on a Sobe Lifewater commercial. I caught up with Brad this week to talk tour grub.

You're a Brooklyner by way of Washington state. What are your favorite New York haunts?
I love Sundaes & Cones, located in Manhattan near 10th Street and 3rd Avenue. They have great flavors. Their corn ice cream is to die for.  Or if you're in an even zanier mood, try the strawberry shortcake. I eat at Bagel Bob's (10th and University) on the reg. They make my favorite bagels in New York.  I usually get a pumpernickel bagel with a little bit of cream cheese and smoked salmon, then buy a cinnamon roll. And the Margherita Pizza at La Nonna's (Clinton and Delancey) is incredible. I also really like the veggie burgers at Quantum Leap near 13th and 1st ave.

Do you have any food biases? If so, what are they and how do they affect your eating habits on tour?
I'm an ice cream snob. In Tacoma, WA, my Dad used to make the most delicious ice cream I've ever tasted. When I'm on tour I need to buy myself an ice cream cone every now and then to keep my spirits up, but I'll feel even worse if I have an unsatisfying scoop of ice cream. How I eat affects my overall mood, thereby replacing a void of physical nutrients with infinite sadness.

So aside from mood-stabilizing ice cream runs, any special dining requirements on the road?
I can't eat fast food at all. I need tons of fruits and veggies. Gotta have salads, gotta have mad apples and bananas.

Describe your best food-experience on tour.
This place called the Penny Cluse Cafe in Burlington, VT. Candidate for best breakfast I've ever had at a restaurant! Buckwheat pancakes, scrambled eggs with swiss cheese and smoked salmon, done really well.

Do you ever treat yourself to high-end dining when you're on the road? If so, what have been some of your favorite experiences?
I like admiring people's clothes, but I don't eat them. don't like pants on my pears, shirts on my shrimp, or coats on my croutons. Feed me naked stuff! Rich stuff with extra butter freaks me out.

So if you're not a big fast food eater, does that mean you avoid all chain restaurants on tour?
I very very rarely eat fast food, but sometimes I'll eat fast food for nostalgic purposes. Occasionally I'll get a milkshake or maybe eat a hamburger twice a year. I'd say my favorite chain is Dick's in Seattle and my favorite fast food place is Frisko Freeze in Tacoma.

What is your favorite city to tour because of the food?
Montreal is awesome! We go to this place called Casa del Popolo, mostly because we played really fun show there once, but also they have super good cookies and sandwiches with fresh ingredients. Also, there's a super good vegan brunch place called "Aux Vivres," or to Americans: "Aux Lives." Incredible smoothies and really good veggie-impersonations of regular American breakfasts.

What is the one food item you can't live without when you're on tour?
Apples.

How do you feel about street food?
I don't really eat street food. Just street fruit. Bought a Thai iced tea off the street in London. It was pretty good.

Time for the lightning round!

Watch Oberhofer play "I Could Go" in a Yellow Couch session: