The Mixed-Up World of Beer Cocktails

Share All sharing options for: The Mixed-Up World of Beer Cocktails 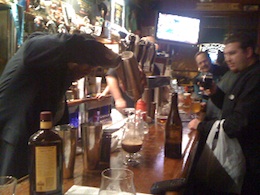 Beer and cocktails, strange bedfellows...or maybe not? We talked to three experts (booze writer David Wondrich, Brooklyn Brewery brewmaster Garrett Oliver, and mixologist Jim Meehan of New York's PDT) who also happen to be fans of the combination, and their words of beery wisdom may just be enough to convert the most skeptical cocktail fan.

"The funny thing is that one of the ancestors of the cocktail itself is a beer drink, called Purl, which was made with bitter herbs and beer," said David Wondrich, the author of the recent PUNCH: The Delights (and Dangers) of the Flowing Bowl (buy on Amazon

). The hirsute historian of all things fermented (and drinks columnist for Esquire and Saveur) then added, "By the early 1700s sailors were drinking Flip, a mixture of beer, sugar, rum, and eggs served hot. Later in the 1700s Portaree, a porter with sugar and nutmeg became popular, was eventually served iced."

In fact, the beer cocktail has a long tradition in the United States as well. "It goes back to the roots of American mixology," he says. "There might be — I don't know if it's a noble history, but it's a long one, and it's one that's not being respected," he says. Beer was indeed part of the early American cocktail awakening: "People used to put a little bit of beer in punch as a smoothing element — I've got one really good recipe that uses porter beer in the book." Despite this American tradition, his favorite beer concoction comes from Mexico: the Michelada (a.k.a. Chelada), a summer sipper made with lime juice, salt, Worcestershire sauce, soy sauce, Tabasco or similar sauce, powdered chilies, tomato juice, ice and beer. "It's really simple, really Mexican, and really good."

The Louche Demerit of Beer in Cocktails

The fact that Wondrich writes of Purl and Portaree while proclaiming his love of Michelada illustrates why, perhaps, people have an ambivalent attitude towards beer cocktails. They don't quite know what to think of the concept. Beer is now simultaneously down-and-dirty yet something higher; there's whiff of louche demerit when beer meets spirit, whether the drink is an Irish Car Bomb (Guinness with a shot of Irish Cream and Whiskey — no thanks) or something served by a guy who looks like he's from The Great Gatsby.

The bad rap is undeserved. "To put it bluntly, the perception is 'stunt cocktail', but I think that the potential is high," says Garrett Oliver, brewmaster of Brooklyn Brewery and dyed-in-the-wool beer cocktail lover himself. "Beer has a set of flavors that don't occur in other ingredients, so you have great potential for whole new sets of flavor. Beer ought not to be used just to add carbonation — I like drinks where the beer is well-integrated and is not a stand-in for something else. The Black Flip is a good example - it's not good despite the beer, it's good because of the beer. That's what you want."

I asked Oliver, the editor-in-chief of The Oxford Companion to Beer why beer works well in certain cocktails on the basis of flavor, texture, or other chemical interactions.

"Beer can add powerful roast flavors, hop flavors and/or malt flavors or both to a drink," he explains. "It can also add carbonation, if that's desired. It can bring its own bitterness. We've done some experiments here that indicated that fresh ginger can work beautifully with big hop aromatics, which is not surprising; IPA is great with a lot of spicy Asian cooking. Beer tends to work well in tall drinks with fruit elements. I've also made cocktails with Belgian wheat beer and St. Germain, which added an elderflower element. My favorite recent beer cocktail was the Port of Funchal at [New York bar] Terroir. If I recall, it was brown ale, madiera, ginger and lime. It was very nice and made good use of all the elements."

Speaking of working together, a year ago Oliver teamed up with Wondrich and Jim Meehan, proprietor and head mixologist of famed underground Manhattan cocktail bar PDT to create a beer Oliver called The Manhattan Project, a robust rye beer aged in 100-proof Rittenhouse Bonded Rye barrels, infused with the herbs and spices that mirrored the flavor of red vermouth and bitters, and dash of tart cherry. While not exactly a beer cocktail, it blurred lines with gusto, and Meehan was the perfect partner in crime for delving into such terra nova.

A great lover of beers himself, Meehan provided his favorite recent beer cocktail recipe. "Nothing sums up the thrill of fall in the Northeast better than Charles Schultz masterpiece, 'It's the Great Pumpkin, Charlie Brown,'" says Meehan. We'll drink to that.

Dry shake, then shake with ice and strain into a chilled fizz glass