Share All sharing options for: Harold McGee on Cookbooks, Harvard, and Food Geekdom 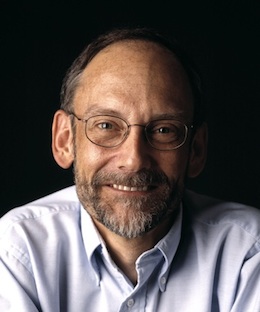 Food writer Harold McGee broke new ground in 1984 with his seminal book on food science, On Food and Cooking. Over a quarter century later, McGee has been invited back to the university where he researched that book to participate in Harvard's Science & Cooking Lecture series, the mere existence of which shows how far cooking has come. We talked to McGee about his participation in the course, his new reference book for home cooks, Keys to Good Cooking (buy on Amazon

), and whether or not his kitchen is some sort of mad scientist's lab (it's not).

Your new book is not your typical cookbook. It doesn't have recipes, instead it's a "guide to recipes." How do you see people using it?
Basically whenever they have a question. Whenever something isn't clear. Either while they're working from a recipe, or while they're considering different recipes, or if a question just occurs to them about the kitchen in general. So it's meant to be a reference book, something that lives in the kitchen and answers practical questions and offers practical advice.

It's something you see a lot in professional cookbooks, but this is one of the first times I've seen it in a home cookbook.
Yeah, I mean one of the reasons I wrote it is that home cookbooks will often give you kind of scattershot information and advice. Some of it's accurate, some of it's not. It just struck me that it would be useful to have a single volume that simply offered basic information and basic advice about ingredients and methods. And a place for people to record their own insights, the things that work for them in their particular dishes.

In the introduction you talk about the abundance of recipes in today's society, and how many of them end up containing errors. So with this book and books like Michael Ruhlman's Ratio and The Flavor Bible that are a step away from recipes, do you feel like we're moving away from traditional cookbooks?
Oh, not at all. I think if anything the world of cookbooks — I don't know about the business of it, but the world of cookbooks is wonderfully rich these days. I mean we're getting the chance to find out about cultures and traditions and ingredients that we never would've known about twenty years ago. So I think there will always be a love for and an interest in recipes. Something to try today, an idea or an inspiration for today.

But I think it's also true, because the universe of recipes is now so huge and so vast, it's useful to have a few kind of organizing books like the ones you mentioned. Books that talk more about the basic principles common to all recipes and all cooking methods.

So what are your favorite cookbooks?
I'd have to say just a couple of standards. I always go back to Julia Child's books and I always go back to Judy Rogers' Zuni Cafe Cookbook. Those are probably the ones that I refer to most often. But I have lots and lots of them, and I use all of them. Well, not all of them, but I use many of them over the course of a year. That's what I love about cooking, is just how diverse it is.

You're participating in the Harvard Food & Science lecture series. What's that like?
It's kind of amazing because it was in Boston that I wrote the first edition of On Food and Cooking in the late seventies. At the time I just had no idea. I would never have believed that in my lifetime, I'd be standing on a stage at Harvard giving a lecture about the science of cooking. It's just amazing to me that the world of food has exploded the way it has over the last few decades, and that the interest in the details, the nitty-gritty runs as deep as it does. That there's as much food geekdom as there is. It's been wonderful to see that develop and to see the way of looking at food making a difference in the best restaurants in the world.

Speaking of food geeks, recently Jose Andres (who is also part of the Harvard series) and Eric Ripert have said things about molecular gastronomy being dead or over. Do you agree?
I have never thought that there was such a thing as molecular gastronomy, even though [that term] was involved in the meetings that formed its life. To me it's always been a misnomer. I think it's certainly true that using lab equipment and industrial ingredients for the sake of novelty, which has gone on for awhile, is winding down. Because that stuff is no longer novel. You can only be surprised once by a dish, after that it's no longer a surprise. I think that is kind of running its course.

What's happening is that those tools and techniques are becoming integrated into the cooking. Chefs who are interested either in improving the cooking that they're already doing, or are interested in coming up with new ways of doing things. Not necessarily to show off the novelty, but just to make the eating experience more interesting.

What are common food, cooking myths you hear chefs repeating that drive you nuts?
Let's see. A related one to the one that I already talk about too much — searing, meat searing in the juices. Every since the late seventies I've been screeching about that to little or no avail. A related one that is applied to lots of different kinds of foods is that if you cook something in a moist environment, like a braise or a stew or steaming or something like that, that that's a way of keeping the food itself moist. And that's just not true. What's important in cooking in terms of moistness and texture is temperature. One of the great things about the last decade or so is the arrival of really good thermometers that make it possible to cool and heat in a way that cooks haven't been able to do before.

So, is your home kitchen some sort of crazy lab or totally normal?
It's normal with the exception that I have a very good scale for weighing things. And a large thermometer collection. I do have an immersion circulator. A couple odds and ends like that, but for the most part, unlike Nathan [Myhrvold], for example, who's really interested in documenting and exploring all the high tech tools that are available to restaurant chefs these days, my focus has always been on traditional and home cooking. So I do that in a kitchen that has basic — [laughs] — like not at all spectacular appliances.